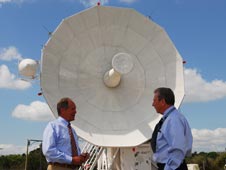 With its beginnings rooted deeply in the historic days of Apollo, the MILA Spaceflight Tracking and Data Network Station has played a key role throughout the 30 years of the Space Shuttle Program. But just as the shuttle program is drawing to a close, so is the long history of MILA. "The end of MILA is officially six weeks from wheelstop. That's it. We hand the keys back to Kennedy Space Center and we walk away," says MILA Station Manager Martyn Thomas. "The MILA mission ends." The Merritt Island Launch Annex, simply known to most as MILA, sits in an area somewhat remote from the main hub of processing and launch facilities at NASA's Kennedy Space Center in Florida. Located west of Kennedy's Visitor Complex and about a mile south of NASA Causeway, the small building is surrounded by a field of complex antennas, dishes and arrays used to perform its vital role: Tracking the space shuttle during launch and landing. But MILA's work begins before liftoff as the countdown clock ticks down and continues as the shuttle climbs into the sky. "It's a combined effort between the Mission Control Center and the Launch Control Center getting together. The interface to those facilities is MILA, because it gets them their data they need to make those decisions," says Gary Morse, station director for MILA. "We're getting command to the space shuttle, we're getting telemetry from the space shuttle, were getting TV from the external tank, which is looking down at the leading edges of the wing surfaces to see if any foam or ice comes off. We are getting tracking data as soon as we lift off from our signal and sharing that with the flight dynamics facility at Goddard as well as the Mission Control Center in Houston." 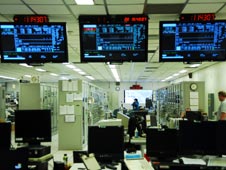 Image above: Inside the MILA facility that has served as a tracking station since the days of Apollo, the team prepares for the final shuttle launch. Image credit: NASA/Jim Grossmann › View larger image

The tracking station serves as the primary voice, data and telemetry communications link between the shuttle and the ground from launch until seven and a half minutes into the flight. Millions of clues about the performance of the space shuttle's main engines and other components are communicated to launch managers, technicians and engineers on the ground, who must keep their fingers on the pulse of the space shuttle during the critical ascent. Beginning with the first space shuttle launch on the STS-1 mission in 1981, the Ponce DeLeon Inlet Tracking Annex at New Smyrna Beach, Fla., was added to MILA's support capability. Located 30 miles north of Kennedy, the station was needed to track the space shuttle during the second and third minutes of flight when the highly reflective plume of the shuttle's solid rocket boosters impede S-band radio transmissions to MILA. MILA also provides communications during space shuttle landings, beginning about 13 minutes before touchdown on Kennedy's Shuttle Landing Facility runway. "Once it comes into range at the Kennedy Space Center, then MILA acquires and can auto track and stay with the vehicle," explains Morse. "It's an interesting period of time," says Thomas. "You're sitting there watching and watching the displays. And you're waiting for the signal light to come on -- that one little light. Then it flickers... and it flickers again... then it goes green and we've got them! Everybody's watching that one little light." Although MILA is located at Kennedy, for most of its history it actually served as a Goddard Space Flight Center operation. The tracking station was originally established in 1966 by Goddard as part of a global, ground-based data network of 17 tracking stations that provided orbital support to the Apollo program and Earth-orbiting scientific satellites. These stations were gradually phased out with the creation of the Tracking and Data Relay Satellite (TDRS) constellation, but MILA remained operational as it continued to serve over the 30 years of the Space Shuttle Program. Now, with the space shuttle's final flight, MILA too will close its doors for good and become a part of U.S. space history. Cheryl L. Mansfield
NASA's John F. Kennedy Space Center
› Back To Top