NASA Dryden and the Space Shuttles
(Editor's Note: NASA's Dryden Flight Research Center at Edwards Air Force Base in Southern California's high desert played a significant role in the space shuttle's development. With the conclusion of the Space Shuttle Program, we are publishing a series of historical retrospectives that explore some of the center's contributions to the shuttle's design, development and flight validation. In this fifth article, Dryden historian Christian Gelzer recalls how a tire failure on STS-23 in 1985 led to extensive research, analysis and testing of both the shuttle's tires and the runway surface at the Kennedy Space Center's Shuttle Landing Facility.) 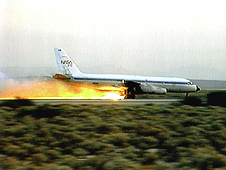 A NASA CV-990, modified as a Landing Systems Research Aircraft (LSRA), lands on the Edwards AFB main runway in test of the space shuttle landing gear system. In this case, the shuttle tire failed, bursting into flame during the rollout. (NASA Dryden Video image) Space shuttle Discovery touched down on the Shuttle Landing Facility runway at the Kennedy Space Center in Florida on April 19, 1985 at the conclusion of mission STS-23 (51D), the 16th shuttle flight. Although the touchdown was uneventful, what happened at the end of the rollout was anything but.

This was the fifth time an orbiter had landed at Kennedy on the new runway built especially for space shuttle landings. At touchdown, Discovery weighed just over 198,000 lbs, one of the lowest weights of a returning orbiter to that point. At very nearly the end of the roll out, the unexpected happened - the inside tire on right main landing gear blew.

"The whole orbiter shook-I thought one of the fuel tanks had blown up," recalls Jeffrey Hoffman, a mission specialist on the flight. While engineers found high tire wear on previous landings, the tire failure on 51D's landing shocked everyone.

There were several contributing factors to the blown tire, the only time a shuttle tire failed during a mission. The crosswind was not an obvious factor, particularly since it did not exceed the maximum allowable crosswind for a shuttle landing.

However, because the nose gear had only a single strain control system, shuttle pilots were reluctant to use it at all, preferring differential braking with the main landing gear instead to control the shuttle's rollout down the runway in a crosswind situation. The strength of the crosswind on this landing led commander Karol Bobko to apply greater brake force than normal to the right main gear. Not surprisingly, the brakes on the right wheels heated to higher than expected temperatures.

But it wasn't the heat that caused the tire to fail. The largest factor in tire wear - and this tire's failure - was the surface of the Kennedy runway. 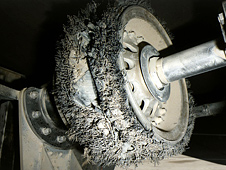 Nevertheless, based on tests and assurance from the tire maker, designers assumed that the shuttle's main landing gear tires would stand up to five or six landings before needing to be replaced. They quickly found that the tires could sustain only one landing, after which they had to be replaced with a new set. The nose gear tires fared a bit better. Allen Louvaire, a NASA shuttle engineer, later remarked: the runway at Kennedy was "a lot rougher than you think-that's no good for a big tire" like the shuttle's. "Man, what were we thinking?"

Until the tire explosion was resolved, shuttle flights would conclude at NASA's Dryden Flight Research Center on Edwards Air Force Base in California for the foreseeable future, not at Kennedy as originally planned.

Engineers at NASA's Langley Research Center in Virginia began tests at their Aircraft Landing Dynamics Facility and at a tire test facility at Wright Patterson Air Force Base, Ohio. Suspecting the runway as a factor following some preliminary tests at Kennedy, a contractor was brought in to begin shot-peening the runway. 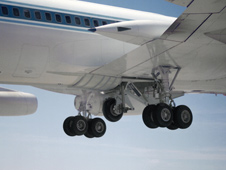 A space shuttle landing gear system was installed in the wheel wells between the two main landing gears on NASA's now-retired CV-990 Landing Systems Research Aircraft. (NASA photo) Realizing the limitations of controlled studies being done elsewhere, Johnson Space Center management then asked Dryden to undertake tire tests in real conditions, something the other centers could not do. Dryden engineers extensively modified an old Convair CV-990 jetliner as a test bed - "Put the "Brooklyn Bridge" inside the fuselage after we cut the keel," said project manager Bob Baron - and came up with the Landing Systems Research Aircraft, or LSRA.

With the new structure inside the fuselage able to lower and raise a shuttle tire on landing, even turn it sideways to mimic crosswind landings - that "Brooklyn Bridge" at work - Dryden engineers and pilots conducted tests on the lakebed and concrete runways at Edwards to see how much abuse shuttle tires could take, and what led to failure. The shuttle landing gear test unit, operated by a high-pressure hydraulic system, allowed engineers to assess and document the performance of space shuttle main and nose landing gear systems, tires and wheel assemblies, plus braking and nose wheel steering performance. The series of 155 test missions provided extensive data about the life and endurance of the shuttle tire systems.

They eventually flew the LSRA to Cape Canaveral and landed on the Shuttle Landing Facility runway at Kennedy where they deployed the shuttle tire during landings. Among their findings: Initial claims for the shuttle's crosswind capabilities were too optimistic. This was especially important since the shuttle had to have Return To Launch Site capability should more than one main engine fail after launch. If between launch and return crosswinds developed at the Cape, the orbiter needed the ability to handle them, and that margin mattered.

In addition to grinding down a portion at both ends of the runway surface at Kennedy, a new tire evolved from the research with more layers of rubber. The nose wheel was given greater steering authority, and the drag parachute was put back on the orbiters to help slow them during landing rollout, a feature originally intended to be installed but then removed from the vehicle before the first shuttle mission, STS-1. Largely as a result of the work done by Dryden and the LSRA, along with research performed at Langley and elsewhere, the shuttle's crosswind landing limits were raised, making it possible once again to land at Kennedy's Shuttle Landing Facility.
Christian Gelzer, historian
NASA Dryden Flight Research Center
Find this article at:http://www.nasa.gov/mission_pages/shuttle/flyout/CV-990_tests.html