Bordeaux and three co-workers will be stationed at the powerful Xenon lights at both ends of the runway about three hours before the shuttle is scheduled to land. The Shuttle Training Aircraft, or STA, is used to preview the readiness of the weather, the runway and the lighting at that time.

"We calibrate the lights so that they are shining evenly and at the proper height," Bordeaux said. "This will be my first night landing and I'm looking forward to seeing Endeavour land."

When the shuttle landing direction is determined, URS Corp. air traffic controllers in the runway control tower will communicate with Bordeaux and his team on the ground. Then two of the operators will light up eight Xenon lights, four on each side of one end of the runway, to illuminate the touchdown and rollout area from behind the shuttle.

According to Ron Feile, a URS air traffic controller, each Xenon light emits 1 billion candlepower, or 20 kilowatts. "They light up the entire runway and the area surrounding it," Feile said. "The Xenon lights date back to the Apollo Program and were upgraded for the Space Shuttle Program." 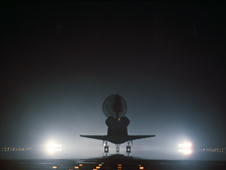 Bordeaux said Xenons light up the launch pads for night launches and when needed, for shuttle night landings at Edwards Air Force Base and all three transoceanic abort landing sites.

There are several other types of lights on the SLF, each with its own purpose. Ball-Bar lights on 15-foot-high poles are positioned on the left-hand side, or commander's side, of the runway, and Precision Approach Path Indicator, or PAPI, lights help guide the shuttle on a gradual, safe descent to the runway.

They are operated by United Space Alliance from the Launch Control Center or SLF Landing Aids Control Building. Feile said these lights are only used for shuttle landings and STA training.

Mike Fessner, a USA special power manager, said the shuttle makes a final approach at a 20-degree angle, which is much steeper than commercial aircraft. "It's important to position the Ball-Bar and PAPI lights at the correct angle."

Approach lights are located 3,000 feet before the runway surface begins. Runway edge lighting is positioned every 200 feet, and runway threshold lighting helps to illuminate the ends of the runway. Lighted distance-to-go markers help the shuttle commander and pilot after they touch down. Centerline lighting is located in the middle 10,000 feet of the runway for rollout guidance. Runway directional signs are lit as well.

All of these lights are operated by URS and can be controlled from the runway tower or SLF Landing Aids Control Building.

During the mission, Behnken and Patrick completed three spacewalks to help install the Tranquility node to the International Space Station. Tranquility will provide additional room for many of the space station's life support and environmental control systems already on board. They also repositioned the cupola on Tranquility so that it faces Earth, giving crews aboard the station a spectacular view of their home planet.

Kennedy's landing crew says they're ready to provide the STS-130 crew with another spectacular view… a brightly lit runway.