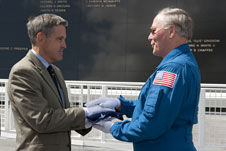 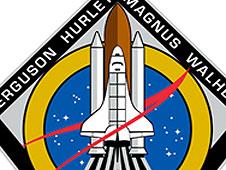 The STS-135 mission patch will be taken into orbit in numerous forms during the flight, the last one of the Space Shuttle Program.

There is at least one first involved with space shuttle Atlantis’ STS-135 mission, a flight notable for its lasts: the crew is taking the first iPhone into space to help with experiments aboard the International Space Station.

A Houston company called Odyssey Space Research developed an application for the Apple smartphone that is meant to help the astronauts track their scientific results and perhaps one day aid navigation. The device will be housed inside a small research platform built by NanoRacks. The platform will be placed inside the station.

The app, called SpaceLab for iOS, is even available to Earthbound smartphone users to perform the same experiments with the software simulating microgravity.

According to the company, the software was designed with the iPhone's unique attributes in mind, such as the gyro, accelerometer, cameras and chip.

Atlantis is to launch July 8 from NASA's Kennedy Space Center in Florida on a mission to deliver supplies and experiments to the space station.

Along with the first iPhone, the crew of Atlantis is bringing along numerous items commemorating what will be the final mission of Space Shuttle Program. For instance, a flag from the first shuttle flight in 1981 will be carried to the station and left there until the first commercial spaceflight to the station, when NASA astronauts will retrieve it. The astronauts, Commander Chris Ferguson, Pilot Doug Hurley and Mission Specialists Sandy Magnus and Rex Walheim, have allocated a number of unique items that will become commemoratives for numerous organizations after they return to Earth.

For example, American flags from the Delaware Valley Historic Aircraft Association, Key Peninsula Middle School in Lake Bay, Washington, and a fire station in Houston are to orbit the Earth for 12 days before being handed over to their sponsors as symbols of inspiration.

The U.S. Honor Flag also will fly aboard Atlantis. Begun as a tribute following the Sept. 11, 2001, terrorists' attacks, the American flag serves as a traveling memorial to heroes who lost their lives while serving their communities and country.

Among the unusual things headed into space is a recipe card from one of the dishes served at Astronaut Crew Quarters at NASA's Kennedy Space Center in Florida.

NASCAR is well-represented on the mission with a cap from Joe Gibbs Racing and black flags from Texas Motor Speedway and the NASCAR organization on the roster of items.

More than 500 STS-135 mission patches are tucked inside Atlantis for the flight, a common take-along for all shuttle missions, along with 800 small American flags that typically are handed out after a mission as awards and recognitions.

When the crew returns, the items will be unpacked from lockers inside the shuttle and returned to the astronauts who often make personal visits to hand them back to their owners.

The custom of carrying mementoes into space began in the days of the Mercury missions, when an astronaut would take a roll of coins or some other small tokens into space. The Apollo astronauts carried items to the moon and back during their missions.

The tradition is not expected to end with the end of the shuttle program. When SpaceX launched its Dragon capsule last year, for instance, it carried commemorative items inside, most notably a wedge of cheese.

The items taken and returned from space rest in schools, museums and facilities all over the world and are often prominently displayed to inspire people to think of the adventures they might one day take themselves.