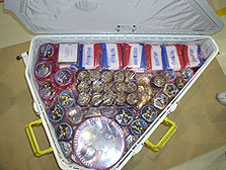 A box of commemorative items for NASA was packed inside space shuttle Atlantis for the STS-132 mission. Photo credit: NASA
› View Larger Image 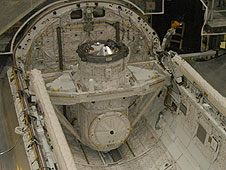 A pair of large boxes holding flags, patches and other items have been anchored to the support struts for the airlock in Atlantis' cargo bay. Photo credit: NASA
› View Larger Image › Listen to Podcast

There are lots of ways for an everyday item to take on a special significance, but few work better than carrying that item into space.

The crew of STS-132 aims to make scores of objects already precious in their meaning more inspirational by taking them on this mission to the International Space Station.

There also are mementos from several other organizations inside Atlantis. A teddy bear from the Cleft Palate Foundation of Chapel Hill, N.C., a lapel pin from the Alzheimer’s Association of Chicago, and flags from the Juvenile Diabetes Foundation International and Make-A-Wish Foundation will be flown into orbit.

Lapel pins and similar-sized commemoratives often are carried because they are small and lightweight, but their symbolism can be immense. The crew tucked a pin from the "Imagine There's No Hunger" campaign, for example, into the flight kit.

There also is room for bulkier items including banners, shirts and jerseys. For instance, Atlantis astronauts are taking a red T-shirt from the charity organization Save the Children.

The astronauts also are carrying several other lighthearted personal items, such as a 4 by 6-inch photo of Peter Pizza in Brooklyn, a piece for a Lego space shuttle and a DVD from the 2009 induction ceremony for the Rock and Roll Hall of Fame. A red squeeze ball from the business network CNBC also is along for the ride.

Such commemorative items typically reflect a personal interest or achievement by a crew member and NASA makes room for them. The expectation is that, back on Earth, many of the objects will inspire future explorers and achievements.

Atlantis and the other shuttles typically carry a host of things, such as patches, flags and other objects intended as special rewards to groups or individuals or goodwill items.

Two large boxes, outfitted for space duty, have been bolted between the braces on Atlantis’ airlock in the payload bay. The triangular containers have been packed with 3 1/2-inch American flags, some 755 small international flags and 1,200 Space Shuttle Program flags. There also are six packages of the red, white and blue flags designed for the individual orbiters.

Shuttles have carried such mementos for more than 30 years. Space shuttle Enterprise, for example, was loaded with patches and flags when it was released from a 747 on several test flights in 1977. Columbia carried a similar assortment on STS-1 and each mission thereafter has included a host of similar items.

Astronaut Gus Grissom is credited with carrying the first mementos into space when he took rolls of dimes on his Mercury flight in 1961.

Almost 50 years later, the goal and effect remain the same: to celebrate and inspire exploration.