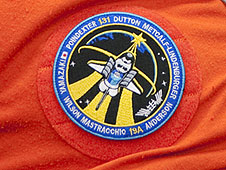 The mission patch for STS-131 emphasizes teamwork, a theme that plays out in the crew's personal selections of mementos to carry with them into orbit. Photo credit: NASA/Kim Shiflett

Schools, colleges and universities from Maryland and Connecticut to California, Washington and Japan will be represented aboard space shuttle Discovery as it thunders into space for the STS-131 mission.

The items reflect personal connections to the astronauts who will fly Discovery to the International Space Station during the 13-day mission. In most cases, they are the alma maters of a crew member, such as a white and green flag from Sheldon High School in Eugene, Ore., which STS-131 Pilot James P. Dutton Jr. attended.

The flight aboard Discovery is her first mission and her first opportunity to take personal mementos into space. A black and gold pennant from Hudson's Bay will make the trip aboard the shuttle, along with a gray and red T-shirt from McLaughlin Middle, also in Vancouver.

Perhaps the most unusual item in her manifest is a 2-by-7-inch "Peace Pole" from Bennett Elementary, an International Baccalaureate World School in Fort Collins, Colo., Metcalf-Lindenburger's hometown.

Taking personal items into space is a tradition that dates back to America's first astronauts who tucked trinkets into their flight suits. Today, shuttle astronauts are allowed to take all kinds of small items into orbit with them, provided they meet stringent size and weight limits. For the most part, the souvenirs spend the whole mission tucked inside lockers inside the crew compartment.

The souvenirs are sometimes retained by the astronaut, but most are presented to the sponsoring institution or organization. The objects normally find themselves displayed prominently to inspire and educate.

That is what Metcalf-Lindenburger hopes will become of the pennant from Hudson's Bay after she presents it to the school.

Although many of the personal items on Discovery are T-shirts, flags, pennants and medals, there also is a wooden shingle from Dutton's F-22 Combined Test Force at Edwards Air Force Base, Calif. Dutton was a test pilot in the program before joining NASA.

A white T-shirt from Laura Ingraham's radio program also is making the trip to the International Space Station, along with a red bandana from the EVA Systems Project Office at NASA's Johnson Space Center. EVA is short for extravehicular activity, which simply means spacewalks.

Also, Discovery will orbit the world with a small version of the world tucked inside, courtesy of Japan's Secretariat of Strategic Headquarters for Space Policy in Tokyo. Naoko Yamazaki, an astronaut for the Japanese Aerospace Exploration Agency, or JAXA, is flying to the station during the STS-131 mission.

Like the other items going into space, the seeds are expected to be used to inspire future generations of explorers.