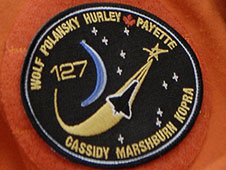 From medallions and patches to a NASCAR team hat, the varied paths of the seven astronauts of STS-127 are reflected in the commemorative items they are bringing along.

Each crew member is allowed to pack a few things into the shuttle for the trip, although there are some limits, including size and weight.

Three of the astronauts have flown before, but that didn’t diminish their desire to celebrate their latest flight into orbit.

Commander Mark Polansky flew on STS-98 and STS-116. This time up, his commemorative choices include a banner from East Central High School in San Antonio, his wife’s hometown.

Dave Wolf first flew in 1993 and also has served on the Russian space station Mir for 128 days. His hometown of Indianapolis is represented by numerous articles, including an airplane paperweight.

A piece of sheet music is making the trip into space to commemorate Julie Payette’s work with the Montreal Symphony Orchestra. The Canadian astronaut is an accomplished singer and pianist.

Christopher Cassidy, making his first flight into space, reflects his previous career with a host of commemoratives from the U.S. Navy’s elite SEAL teams. He’s carrying a medallion from the National Navy Underwater Demolition Team – SEAL Museum in Fort Pierce, Fla., plus medallions and patches representing SEAL units across the nation.

Fellow first-time flier Doug Hurley is taking a hat from the NASCAR team Joe Gibbs Racing, along with a T-shirt from his alma mater Owego Free Academy in Owego, N.Y.

Tom Marshburn is bringing a pin from Statesville, N.C., his hometown, along with a pewter coaster from the University of Virginia’s engineering department. That’s the school he graduated from.

Tim Kopra piloted helicopters in the U.S. Army before joining NASA. He is taking with him a copper medallion from his high school, McCallum High School in Austin Texas.

Endeavour also is packed with hundreds of items commemorating something not intended to make the trip back – the Exposed Facility of Japan’s Kibo laboratory for the International Space Station.

The exposed facility is a platform that attaches to one end of the Kibo section on the space station. The platform will hold experiments designed to study the vacuum of space outside the station’s protective confines.

The Japan Aerospace Exploration Agency, or JAXA, will celebrate the achievement of the lab and the mission in part with the patches, pins and flags flying on Endeavour.