Buzz Lightyear to Soar with Discovery 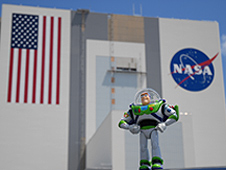 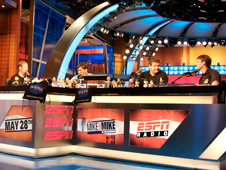 NASA EDGE hosts Chris Giersch and Blair Allen discuss the sports theme of STS-124 during a broadcast of ESPN Radio's "Mike and Mike in the Morning" show. NASA astronaut Ken Ham is a fan of the ESPN broadcast and will talk to the show during the mission. Credit: NASA


Seven astronauts who will fly into orbit aboard space shuttle Discovery will have comfortable seats for the climb into space. An eighth space ranger won't have a seat at all. In fact, he will be packed tight inside a box and won't even get to enjoy the ride up.

But it's nothing veteran spaceman Buzz Lightyear can't overcome.

The good news is that he'll have some sports shows to listen to, along with a host of jerseys that have been to the Champs Elysees in Paris for the Tour de France and to the Super Bowl.

More accustomed to soaring among the galaxies on fold-out wings and a backpack rocket, Lightyear will take to space on Discovery’s STS-124 mission stowed inside a locker in Discovery's crew compartment. The 12-inch-tall action figure is flying as part of a partnership between NASA and Disney Parks to encourage students to pursue studies in science, technology and mathematics, one of NASA’s main educational goals.

Disney’s Youth Educational Series and NASA have developed an online program known as the Space Ranger Education Series. It includes fun educational games for students, as well as materials for educators to download and integrate into their classroom curriculum.

“NASA is excited to help students understand the science and engineering currently underway on the International Space Station,” said Joyce Winterton, NASA assistant administrator for Education. “The educational games and resources from this partnership will allow students to explore the science and math behind space exploration with a beloved character.”

Each crew member is permitted to carry a few small personal items that are packed into lockers before the launch. STS-124 Pilot Ken Ham is responsible for the entertainment - CDs of the ESPN Radio show "Mike and Mike in the Morning." Ham is also expected to talk to hosts Mike Golic and Mike Greenberg from space towards the end of his mission to the International Space Station.

A plastic microphone stand with the ESPN logo is also making the trip.

Discovery's crew will sport a number of athletic items as it embarks on its mission to deliver the Japanese Kibo laboratory's main module.

A yellow jersey from Lance Armstrong's record-setting seven victories at the Tour de France bicycle race, the backup jersey Eli Manning took to the Super Bowl, and the last jersey baseball's Craig Biggio wore in a game have places inside the orbiting locker room.

The sports interest will kick off even before Discovery launches into space on May 31. The crew of the NASA EDGE program introduced space food to co-host Golic, a former football player who regales in culinary pleasures and enjoys the occasional eating contest.

Golic sampled several items from Ham's stellar menu, including fiesta chicken, shrimp cocktail and Mexican scrambled eggs and compared their taste to Earth food. In a challenge to name which was made for space and which was made as traditional Earth fare, Golic could not tell the difference. The dishes were served just as they are in space, starting off as dehydrated or freeze-dried food heated up with hot water.