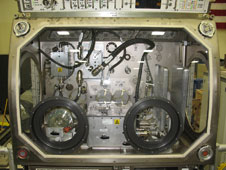 The IVGEN machine will operate inside the Microgravity Sciences Glovebox aboard the International Space Station. This is a mock-up of the flight-ready model that will go into space aboard STS-131. Photo courtesy of Dr. Philip Scarpa
›  View Larger Image 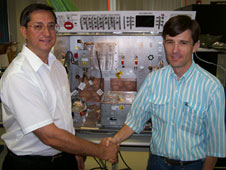 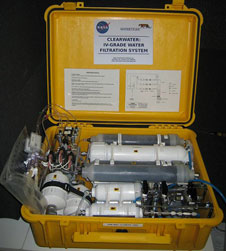 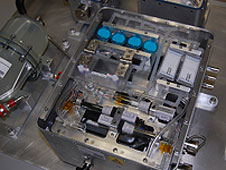 The fliters for the IVGEN system have to work when there is no gravity, which presented unique hurdles to the designers. Photo courtesy of Dr. Philip Scarpa.
›  View Larger Image Technology for a water filtration system initially developed at NASA's Kennedy Space Center in Florida is going to get a major test during the STS-131 mission as it is called on to create water clean enough to be used intravenously, commonly referred to as an IV. If it works, the system could prove critical to future astronauts if they have a medical emergency while traveling far from Earth. It could also find earthbound uses by the military, in remote locations or in humanitarian relief efforts.

Dr. Philip Scarpa’s team at Kennedy partnered with NASA’s Glenn Research Center in Ohio to develop a device that filters microscopic contaminants, including heavy metals and toxins, out of drinking water to produce fluid as sterile as any made on Earth.

"On every space mission, there's a potential of getting sick or getting hurt," Scarpa said. As Kennedy's medical operations manager, Scarpa helps provide medical support to the astronauts before they launch into space and after they land.

For example, an astronaut with severe burns can require about 100 liters of IV fluids for weeks, with 30 liters needed in the first three days. One recent NASA study reported that a mission to Mars may need as much as 248 liters of IV fluids on board. Currently there are 12 liters of fluid stored on the space station. Even less severe conditions, such as broken bones or motion sickness, can deplete the stock quickly, especially if more than one astronaut is sick or injured.

At more than two pounds of weight per liter, IV fluids are very costly to take into space. It also takes up a lot of volume, and due to its need for sterility, IV fluids have a limited shelf life.

“On board or ‘in-situ’ production of IV fluids needed for medical treatments, could greatly reduce these costs and storage limitations, and would give NASA much more flexibility in how it can use the water it already has on the spacecraft,” Scarpa said.

Prior to partnering with Glenn in 2007, Scarpa teamed up with researchers from the United Kingdom and Canada to develop the technology. Called “Project Clearwater,” the team started its research in 2005 with a grant from the Florida Space Research Institute. "When we started looking into this, we thought we would quickly find out that someone had done this already," Scarpa said. "After our background research, we were surprised that no one had been successful with this before. It's not easy. The requirements for medical-grade water for injection are very strict and difficult to meet without large factory-based processes."

Without gravity, water can channel by adherence to its container and bypass a filter entirely. Mixing of the final salt water solution also could be incomplete, and launch vibrations could cause the device to release small particulates into the lines. Also, without gravity, the air in the system doesn't separate out from the fluid. This may form bubbles in critical areas, such as blocking off filters. If the filters are blocked, the water will not be screened.

"Bubbles are probably the biggest concern," Scarpa said. “Bubbles in IV fluids are dangerous for a patient as well. If entered into the veins, they could cause a stroke by blocking the brain’s blood flow.”

Scarpa’s team devised the use of micron-sized filters to trap and squeeze out the bubbles from the system.

By 2006, the team had developed a suitcase-sized device that filtered both drinking and dirty water, producing ultra-pure sterile water that meets all U.S. Pharmacopeia standards.

Based on that initial success, the team from Kennedy and Glenn developed a flight-ready system. Dubbed “IVGEN” for IntraVenous Fluid Generation, it will seek to produce IV-grade water from available space station drinking water.

The device will be hooked up to an Iodine Crew Water Container on the station and water will be transferred into an accumulator, which is a plastic bag inside a hard container. Nitrogen from the station will pressurize the bag to push the water out of the accumulator and through several micron filters, a deionized packed resin filter, then another set of micron filters and into an IV collection bag similar to the kind used in hospitals.

The bag, which contains salt and a stir bar, will thoroughly mix the fluid and salt to form normal saline, the kind of IV fluids used on Earth. After the solution runs into another collection bag to measure mixing uniformity, the sterile saline will be complete and ready for collection.

For the purposes of the experiment, additional computers and sensors have been installed to take on-orbit data of all IV fluids created and to measure equipment performance.

In the station’s Microgravity Sciences Glovebox, astronauts will run the device several times beginning in early May, and two bags of sterile saline solution will be frozen and returned to Earth on STS-132 for testing.

"A perfect result would be to have output water that satisfies the strict standards for water for injection without any failures or performance issues," Scarpa said.

He is optimistic the device will work because the system was extensively tested on the ground and in the Zero-G aircraft.

As NASA ventures out farther into space, astronauts will require longer stays and farther destinations with little chance for immediate return or resupply from Earth. Producing medical-grade IV solutions is key to mission success.

In addition to spaceflight, Dr. Scarpa realizes the great potential benefit of this technology for applications right here on Earth, so he has been developing a small, handheld unit that could be used by the military in remote field operations, in submarines and on ships, and in medical relief efforts.

Scarpa said, “IV fluid production anytime, anywhere, has great medical benefit on the ground as well as in space.”