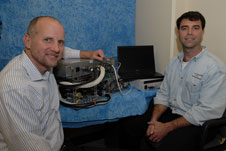 Tim Griffin, foreground, and designer Richard Arkin miniaturized the leak detector system used by the space shuttle and then found out it could be used for volcano studies. Working with Costa Rican officials, the mobile detector has been used to find out what gases volcanoes give off and how much. With enough information, the detectors are expected to be able to predict a volcanic eruption in time to allow safe evacuations of nearby areas. Photo credit: NASA/Amanda Diller
›  View Hi-Res Image 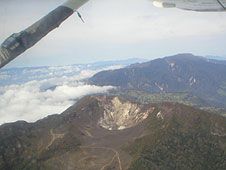 The mobile leak detector was placed inside a small aircraft and flown over the Turrialba volcano to gauge the air around the volcano. In this photo, the sampling device is attached to the wing strut and positioned so it doesn't pick up exhaust gases. Photo courtesy of Tim Griffin
›  View Hi-Res Image 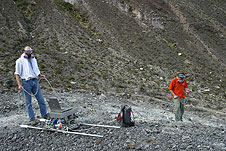 Tim Griffin and his team of researchers carried the leak detector by hand into the cone of the Turrialba volcano in Costa Rica in 2005. Photo courtesy of Tim Griffin
›  View Hi-Res Image 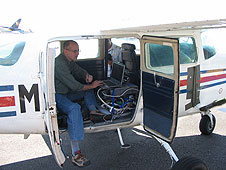 Tim Griffin works with the mobile leak detector in the back seat of a Costa Rican airplane before a sampling fllight. The shuttle leak detection system used at the launch pads is the size of three refrigerators, but Griffin's team reduced it in size and added automation so it could be mobile.Photo courtesy of Tim Griffin.
›  View Hi-Res Image As Tim Griffin and his team were working on better ways to detect hazardous gases on the shuttle launch pad, they found out they also could build something to find hazardous gases venting from a volcano.

That means they may be only a short time away from building an early warning system for volcano eruptions -- a system that could give those near an active cone days or more to evacuate to safety.

"There are all kinds of volcano eruptions, some have all kinds of gases and some don't have any gases," Griffin said. "The long-term idea for this is that we'd be able to characterize the volcanoes. Then if the volcano becomes more active, we can get a better idea of what's going on, how active it is, (and) do we think it's going to be a violent eruption or mainly gases coming out?"

Griffin, who is the chief of NASA Kennedy Space Center's Chemical Analysis Branch and holds a Ph.D. in chemistry, never studied volcanoes. Instead, his group's goal was to shrink the leak detection system at the launch pad from the size of three refrigerators to something that could be carried by hand, in a car or perhaps inside a spacecraft.

"This project started off as a way to push the boundaries with our shuttle system," said Richard Arkin of ASRC Aerospace, the detector's co-designer. "We wanted to make it smaller, more powerful and lighter while still maintaining operational abilities and maintenance."

Parts of the miniaturization work were easy, such as going from numerous sampling ports required at the pad to a single port for the smaller machine. Other aspects, such as building smaller pumps and other components, required innovation and invention. In both, a mass spectrometer is used to find out what chemicals are present in the air.

They also set out to make the unit relatively autonomous, but still reliable and hearty.

At this point, the detector weighs in at 75 pounds. It stands about 9 inches tall and its footprint is a bit larger than a backpack. In fact, one of the goals of the project is to make it small enough to be carried in a backpack.

Griffin was talking about some of the work involved in chemical analysis at a conference when officials from Costa Rica's scientific program asked about applying the technology to the volcanic studies. It started to look like a natural fit.

Costa Rica proved a good testing ground for the equipment because most of the population lives around or near four active volcanoes. They don't worry only about sudden eruptions, but also high concentrations of carbon dioxide the volcanoes vent. The gas tends to kill all vegetation and livestock near the venting areas, but people can't see the carbon dioxide.

The detector showed a way to find out where the gas pockets are and how they change. The team flew the detector on three different kinds of airplanes, where it modeled the chemicals in volcanic plumes in three dimensions, a level of precision that astonished Arkin.

"That was something that I never thought about doing," Arkin said.

The team also put the detector in the backseat of a car and drove it through Costa Rican cities to sample the air and also carried it into the volcanoes by hand. In the future, Griffin wants to load it inside drones so the detection system can fly directly into the plumes of erupting mountains without endangering a pilot.

The results are expected to provide more information to help researchers pinpoint what volcanoes are doing at any given time, and when or if they might be about to spew.

Although the highest potential is still a few years away for the detection system, Griffin said he can envision a time when there are a number of detectors based around the world ready to scan volcanoes suspected of erupting. The extra information could be enough to convince officials to order an evacuation before it's too late.