Grow Text SizeShrink Text Size
View From the Top
If you have the stomach for it, Vinnie LaFiura has an amazing view to show you.

But to see it, you must be willing to go out on a 30-inch-wide painter's platform some 52 stories above the ground.

You'll have a clear look at the launch pads just three miles away at NASA's Kennedy Space Center and the Florida coastline beyond. But when you glance past your safety harness and down at your shoes, the half-inch gaps between the planks show people that look like ants on the ground 525 feet below. 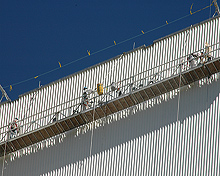 Image above: Painters working at dizzying heights at the very top of the Vehicle Assembly Building. Photo credit: NASA/Jim Grossmann
› High-res Image
Even while you're tethered, don't expect to feel that secure. "Sometimes when the wind blows you back away from the building, it'll take your breath away if you're not used to it," he said.

It may sound like thrill-seeking, but the work is critical to keeping the Vehicle Assembly Building ready for America's space program. LaFiura and his crew are among two groups of contractors who are refurbishing nearly every inch on the outside of the assembly building where NASA now stacks space shuttles for each launch and soon will put together the Ares rockets of the burgeoning Constellation Program.

United Space Alliance workers are restoring the enormous doors at the openings of high bays 1 and 3, while Met-Con Inc. is focusing on high bays 2 and 4. Met-Con is also painting all the siding and replacing the fasteners that hold down the panels on the building's exterior and protect the shuttle flight hardware and vital ground support equipment. 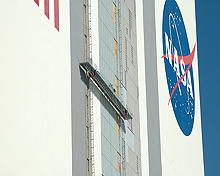 Image above: Only mid-way up the side of the massive building, the tethered workers are almost invisible. Photo credit: NASA/Jim Grossmann
› High-res Image
The crews stopped telling themselves "don't look down" a long time ago, but they still respect the extreme nature of their job. "I don't think you can ever get used to being up there," said Danny Gray, a subcontractor for Met-Con Inc.

He estimates that he's spent more than 500 hours on safety training in his career. "When you get too comfortable, you start making mistakes."

The corrugation on the aluminum siding and the potential for overspray from such heights prevent workers from painting an easy way. So at least four days each week, 10 hours a day, they head skyward at 6:30 a.m. armed with four-inch hand rollers to paint the giant building, like David fighting Goliath. The battle to refurbish one of the world's biggest buildings won't end until about August 2009, but just a glance at the exterior shows you the workers are winning.

The NASA logo and the 209-foot-tall American flag that take up several stories on the south side have returned to their luster after fading under the intense Florida sun and losing many panels during the 2004 hurricane season. 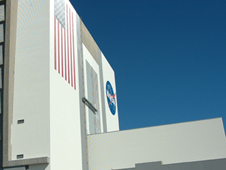 Image above: From the ground, the immense size of the Vehicle Assembly Building overshadows the workers painting and repairing its walls. Photo credit: NASA/Jim Grossmann
› High-res Image
The crews are well on their way to rolling on about 10,000 gallons of paint, as well as replacing about half a million fasteners to further ensure the siding panels can withstand heavy winds.

They're also adding new translucent panels on the north and south side of the massive structure to allow more sun to shine into the transfer aisle inside. The old panels had been there since 1964, said Bruce Kinnaird, NASA manager for the siding project.

"As we've been replacing them, the daylight inside has increased enormously. We may be able to reduce the (artificial) lighting in there now," Kinnaird said.

The crews use motorized "mast climbers" to move up and down the flat sections of the building. Think of them as exposed elevators. But to reach the tougher spots, they trade those elevators for a pulley system of "swing stages" that use platforms not fastened to the building. While the crews don't use the swing-stages in high or gusting winds, an occasional sudden draft will blow their platforms 4 or 5 feet away from the building. Even the buzzards look at them like they're crazy.

"The mast climbers are like walking on the ground compared to the swing stages," LaFiura said.

It's the tallest job many folks on the crew have tackled, and there's no easy way for someone to start their first day on the job prepared for the steep heights. They have to start low and gradually gain the experience to make it as high as the 525-foot level.

Once they're up there, LaFiura grinned, "You can't beat the view."