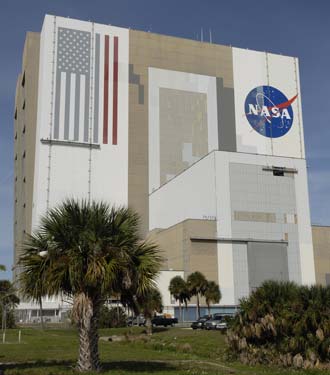 The star-spangled banner will shine a little brighter in the rocket's glare -- at least at NASA's Kennedy Space Center in Florida. On the massive 52-story Vehicle Assembly Building, the American flag and the NASA logo that adorn the south face of the building are receiving a badly needed paint job.

Image at left: A painters' platform can be seen suspended on the side of Kennedy Space Center's Vehicle Assembly Building, where the repainting of the American flag and the NASA logo is under way. The images were last painted in 1998 for NASA's 40th anniversary celebration. Image credit: NASA/Kim Shiflett + View Larger Image

The 209-foot-tall, 110-foot-wide flag was first painted on the building in 1976 in celebration of the American Revolution bicentennial. To make sure NASA planners got it right, the agency consulted the Department of the Army's Institute of Heraldry at the Pentagon in Washington, D.C. The result was the largest American flag ever depicted, with its stripes 9 feet wide and stars measuring 6 feet in diameter. In addition to the flag, a 110-foot symbol of the bicentennial was also added to the building at that time and remained there for the next 22 years.

In 1998, to commemorate NASA's 40th anniversary, the fading flag was repainted and the 12,300-square-foot NASA logo -- affectionately known as the "meatball" -- replaced the bicentennial emblem.

Image at right: The bicentennial emblem, painted in 1976 to honor the country's 200th birthday, faded from view under a coat of primer as it was replaced by the NASA "meatball" in 1998. Image credit: NASA

Since then, time and weather (especially the 2004 hurricane season) took their toll on the flag and the meatball. During back-to-back hurricanes, the building lost nearly 850 of its panels that each measure 14 by 6 feet, and not even the flag was spared. 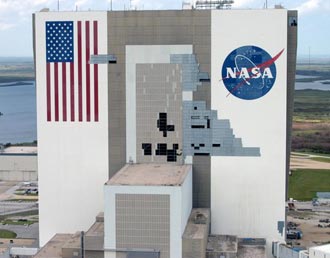 The strong storm winds took a "bite" out of Old Glory's stripes until repairs were completed.

Image at left: During the active storm season of 2004, the Kennedy Space Center was battered by two hurricanes in less than a month. The Vehicle Assembly Building lost 850 panels from the south exterior during Hurricane Frances, and 25 additional panels were pulled off the east side by the winds from Hurricane Jeanne just three weeks later. Image credit: NASA

But things are looking brighter for the building that has served human spaceflight for more than 40 years. Painters' elevated platforms once again dangle high on the side of the 525-foot-high structure while workers use rollers and brushes to spruce up the flag and meatball -- not a task for the faint of heart.

In the end, the results will be seen for miles, and one of the most visible symbols of the launch complex will shine once more. 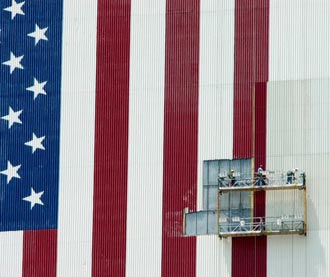 Image at right: As two hurricanes, Frances and Jeanne, assaulted the east coast of Florida in 2004, the flag was damaged when exterior panels were ripped away by the winds. Image credit: NASA