Tunnels of Activity
The rumbling of space shuttle engines and the view of a spectacular liftoff cause excitement as they capture the imagination of the world. Support systems in the tunnels beneath Launch Pads 39A and 39B are not so glamorous, but are extremely important to the success of those launches. 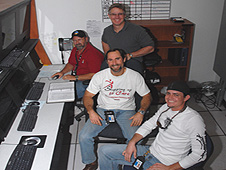 Image above: The ECS team is ready for the next launch. Photo credit: NASA/KSC

The past meets the present in a series of rooms and connecting tunnels called the Pad Terminal Connection Rooms that actually were built above ground in the 1960s, before construction of the launch pads on top. The largest of the rooms beneath the pads -- the Environmental Control System, or ECS -- contains electrical lines, uninterruptible power systems and air conditioning systems that travel up to the mobile launcher and space shuttle.

For Jerry Lovelace, a United Space Alliance ECS lead technician, it's the best place to work at NASA's Kennedy Space Center in Florida. Lovelace has worked at the pads since 1979 and says the work never is routine in the ECS room.

"We may be working on a 350-horsepower turbo blower one day and troubleshooting a high-tech piece of electronic equipment the next," Lovelace said, "or even running ducts to support a foam repair on an external tank."

From the time a space shuttle arrives at the pad until launch day, the ECS room is the main hub of activity. Up to a dozen NASA and contractor personnel use four computer consoles to monitor and control the systems.

About 12 hours before launch, workers prepare for hazardous gaseous nitrogen purges in the shuttle compartments. They crank hand valves and keep an eye on automatic valves that flood or purge the orbiter during liquid hydrogen/liquid oxygen loading to reduce the risk of fire during these hazardous operations.

Once completed, ECS control is transferred to the Firing Room and all workers are cleared to a location outside the blast danger area. 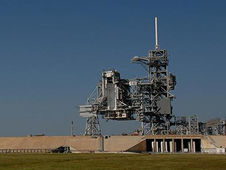 Lovelace said the ECS is the largest single system at Kennedy, reaching from two stories below the base of the fixed service structure to its highest levels. The primary function of the ECS is to provide a controlled atmosphere for the shuttle vehicle, payload change-out room and various other areas at the launch pads.

Another room contains the hydraulic pumps that provide power to the gaseous oxygen vent arm and orbiter access arm.

Leading in from the east-west tunnel, massive concrete walls stretch up to the pad from ground level. High above are the remains of pipes and support systems used during the Apollo Program. Scorch marks on brick walls in the flame trench room reveal the power and intensity of engines ignited for launch throughout the years.

At Pad 39B some of the rooms no longer are used, including the famous "rubber room," abandoned in place after the Apollo Program ended. At one end of the entryway to the room is a long, narrow tunnel leading west to the perimeter of the pad - an escape route for Apollo astronauts.

Lovelace said some unusual visitors beneath the launch pads included an opossum napping in a 480-volt electrical cabinet, several raccoons, snakes, birds and even a bobcat.