Making a List and Checking It Twice
We all know what it's like to pack for a vacation, but how about packing for a trip to the International Space Station? Now imagine packing the space shuttle with all the vital equipment and personal items the astronauts need for a successful mission. 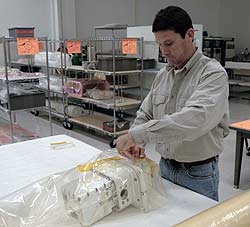 Troy Mann, lead technician for United Space Alliance's Flight Crew Systems, and his team have the daunting task of making sure the space shuttle crew members have everything from toothbrushes to spacesuits stowed in the orbiter by launch day.

Image right: Mann wraps one of thousands of items that will be stowed on the space shuttle before launch. In the background are a few of the many shelves that hold equipment and supplies awaiting their trip to the orbiter. Photo credit: NASA/Dimitri Gerondidakis
+ View High-res Image

Unlike a trip on Earth, there's no convenience store in space to pick up a few missing items.

"When people go on vacations, we all know we usually forget something," said Mann. "That has never happened stowing for the shuttle." And Mann should know, since he's been packing the shuttle for more than seven years.

After arriving and being unloaded at Kennedy, the cargo is checked for damage, weighed, tagged and put into shipping containers until it has to be stowed for flight. 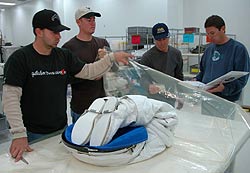 Every item has a specific locker or space, and Mann's team follows a precise map for stowing the supplies in the mid-deck crew compartment on the shuttle.

Image left: Mann studies the checklist as his team carefully wraps a spacesuit before packing in a specially designed container prior to stowing on the shuttle. From left to right are Ray Smith, Craig Meyer, Mark Shimei, Troy Mann. Photo credit: NASA/KSC
+ View High-res Image

"There is no room for error. Every square inch of space is used and planned for ahead of time," said Mann.

Each spacesuit weighs over 200 pounds and is received in four pieces. It takes three technicians using a ground handling device and pulley system with a safety harness to maneuver the suits into the shuttle. 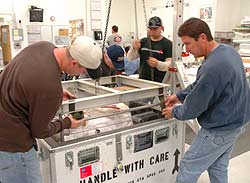 More than 6,500 pounds of equipment is loaded on the shuttle for every mission. That's equal to two tractor trailers, and fills more than 40 lockers and spaces with bags and containers in the mid-deck stowage areas.

When the astronauts are practicing their flight plans during the terminal countdown demonstration test at Kennedy a few weeks before launch, Mann has to make sure the seats, communication equipment and cables are onboard for the mock launch countdown. After conclusion of the test, this all has to be destowed, repacked and readied for the actual launch.

In the final weeks before liftoff, Mann and his crew check and wrap thousands of pieces of equipment. On any given day or night before a launch, rows upon rows of shelves in the Space Station Processing Facility Lab at Kennedy are filled with thousands of individually wrapped and tagged bundles.

In addition, the group is tasked with installing the three external tank cameras, as well as docking cameras, mini-cams and other cameras for on-orbit use.

The most critical time is 11 hours before launch, when the last few items such as fresh food, personal items and science experiments must be stowed on the shuttle. 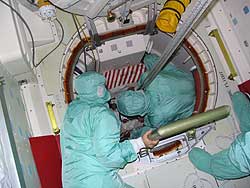 "The best part of my job," said Mann, "is after launch and during on-orbit operations, where we get to see the equipment that we've stowed on the vehicle being used by the crew."

Image left: It's a tight fit as the stowage team in their cleanroom suits deftly guide the spacesuit container into the orbiter. Photo credit: Courtesy of United Space Alliance + View High-res Image

On landing day, Mann's team is at Kennedy's Shuttle Landing Facility to unpack time-critical items like the science experiments that need to be retrieved quickly from the orbiter.

As NASA works to fulfill the nation's Vision of Space Exploration, Mann is looking to support stowage needs for the new crew exploration vehicle on future missions to the moon, Mars and beyond.