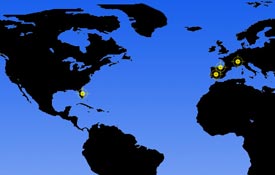 When a space shuttle roars from the launch pad and arcs over the Atlantic, a safety net of European landing sites is ready to save the day in the event of a problem. Known as Transoceanic Abort Landing sites, or "TAL" sites, the specially prepared bases are a shuttle's safe haven in times of trouble.

The big question is when would NASA need a TAL site? "Those sites are there as a place where the orbiter can land if it doesn't have enough energy to get into orbit," said Tom Friers, a NASA ground operations manager who runs one such site. Landing at a TAL site could be necessary, for instance, if a space shuttle's engines failed, leaving the vehicle short of power to make it into space. Landing at a TAL site has never been necessary, but it's smart to have the option.

NASA currently has three TAL sites, two in Spain at Moron and Zaragoza, and one in the South of France at Istres. The three air bases are within gliding range of a space shuttle trying to reach the International Space Station. 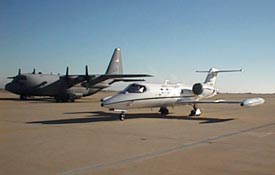 Friers is the NASA manager for the Zaragoza landing base and directs a team of about 100 people who set up and operate the TAL site during launches. Joining Friers is an astronaut-pilot known as a "TALCOMM" -- short for TAL communicator. It's the TALCOMM's job to check the flying conditions around the runway and talk to shuttle astronauts if they need to come in for a landing.

Image to left: The TALCOMM flies in a Learjet like the one pictured to check the landing conditions around the TAL site. Image Credit: NASA

For Friers, working with the Space Shuttle Program and abroad makes for the ultimate combination. "I absolutely love it. I've got the best job at NASA," confirmed Friers. "I love seeing different places, meeting different people and trying different things."

To be chosen as a TAL site, an air base has to meet a number of requirements. For starters, its runway needs to be a minimum of 7,500 feet long. Not surprisingly, the weather around the base should typically be nice, as well. The base also must have a military-grade navigation system called a TACAN, which stands for Tactical Air Navigation, and be adaptable to special guidance devices NASA uses with the shuttles.

In addition, the surrounding community must have the right infrastructure to help NASA prepare the Space Shuttle for a return flight back to the United States. 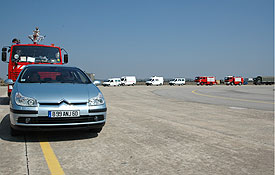 NASA is grateful for the support that it has received from the governments of France and Spain and from the people in the communities surrounding the TAL sites. "The Spanish have been fabulous hosts over the years. The French have been very accommodating and very, very friendly too," said Friers.

Image to right: A convoy of vehicles lines up for a landing rehearsal in Istres, France.
Image Credit: NASA

Despite a good relationship, challenges still remain when working with one culture while living in another. "We sometimes get hung up trying to live like the Spaniards but work like Americans," explained Friers. "You can't go to work at seven in the morning and not start dinner until nine or 10 at night for too long. After a week or so, it grinds you down."

Even with the nagging time differences, Friers loves the chance to share the adventure of space flight with the local people he encounters. "It makes you feel great! This last trip, the TALCOMM and I bumped into a gentleman from Italy -- a very wealthy man who runs an olive oil company. He was so impressed with the fact that we're NASA and this one guy's an astronaut. We had a great chat with the guy."

In the end, it's the sheer fact that NASA places so much value on something the agency never has needed is what means the most to Friers. "The thing that strikes me is the lengths NASA will go to -- both in cost and expenditure of resources -- to provide this safety valve, this emergency landing capability, is pretty impressive to me."