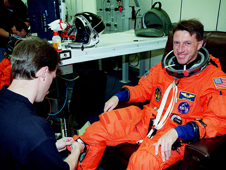 In the suit-up room at Kennedy Space Center, Mission Specialist Michael Foale smiles as a suit technician helps him don his launch and entry suit before liftoff on the STS-103 mission in December 1999. Image credit: NASA
› View Larger Image 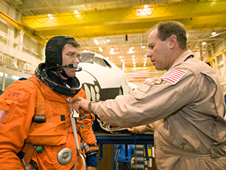 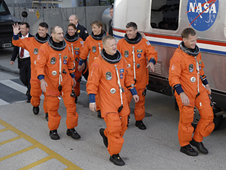 On launch day, a space shuttle astronaut's first challenge isn't handling the force of liftoff or adjusting to microgravity.

It's getting into the bulky, bright-orange Advanced Crew Escape Suit (ACES) that provides each crew member a safe cocoon of pressure, breathable air and survival essentials during launch and landing.

Early in the astronauts' launch day activities at NASA's Kennedy Space Center in Florida, they go to the suit-up room, which is the same room where astronauts have suited for flight since the Apollo missions. Each astronaut climbs into their one-piece suit with the help of several United Space Alliance technicians from the Crew Escape Equipment Group at NASA's Johnson Space Center in Houston.

"Work begins days and days in advance," explains Insertion Technician Drew Billingsley, who has worked with at least 20 shuttle crews in the past 12 years. He's part of the Crew Escape Equipment Group, which includes six insertion techs and 14 suit techs.

Billingsley reviews just a few of the preparation milestones: Emergency oxygen bottles are inspected and installed into their harnesses. The suit's liquid cooling system is checked to verify it's not leaking and is functioning properly. There are parachute inspections and suit pressurized leak checks, as well as an "end-to-end" check of the communications systems.

All this advance work sets the stage for a smooth suit-up on launch day.

First, in private, the astronaut puts on long-sleeve, long-pant thermal underwear lined with tubes, through which cooling water flows after the ACES suit is on. Then the astronaut enters the suit-up room and while sitting in a recliner, steps into the suit feet-first.

"At this point, you dive and then you scrunch," explains NASA astronaut Michael Foale, a veteran of four space shuttle missions and long-duration stays on both the Russian Mir space station and International Space Station. "You're bending your stomach muscles as much as you can to bend yourself over in two. You put one hand in, then the other hand, and wriggle your arms. This pushes you through the suit arms, and gets your head somewhere near the neck ring.

Next, the astronaut ducks his or her head into the suit's metal neck ring, but the last obstacle is actually a neoprene dam that forms a seal around the neck. "It's designed to be the width of your neck, not your head, so it's very tight as you push your head through it. Your hair gets pulled out as the rubber comes down over your face and squeezes your neck," Foale explains.

A suit tech assists each crew member through every step by holding the suit as the astronaut climbs in and ensuring a proper fit before zipping the suit closed. Next are boots, which are strong enough to support the feet and ankles in the event of a parachute fall but flexible enough to allow the astronaut to run.

Suit techs pack the astronaut's pockets with survival items such as flares and radios, along with a lanyard to help reach the suit zipper. Crew members may also carry a variety of personal items, such as a pen, pencil, flashlight, glasses, watch, wrist mirror and more.

The carefully choreographed launch countdown allows a 45-minute window for the completion of suit-up and testing. Since any problem that pops up during suit testing can take time to resolve, the process is time-critical.

The flight crew leaves together for the launch pad, riding the elevator from the crew quarters down to the ground level where the silver Astrovan awaits. Inside the van, the astronauts can plug into cooling units at each seat to avoid overheating in their heavy suits. One insertion tech accompanies the crew to the launch pad; another is already there. Both insertion techs are part of the closeout crew.

When an astronaut reaches the White Room, Billingsley explains, there are several additional tasks to complete. The parachute harness is put on, as is the "snoopy cap," the cap containing the crew member's communications headset. At the same time, the protective booties that covered the astronaut's boots during the trip to the launch pad are removed.

As the astronauts are seated and strapped in, the gloves and helmets are put on once more -- this time, for flight. A round of voice checks confirms each crew member is able to communicate with crewmates, launch controllers at Kennedy and mission controllers in Houston.

Two minutes before liftoff, crew members close and lock their helmet visors for the upcoming journey to orbit. Once in space, crew members remove their gloves and helmets and climb out of their suits, assisted by other astronauts if necessary. They'll also help each other suit up once more as another successful mission draws to a close and the crew and shuttle return home.
Anna C. Heiney
NASA's John F. Kennedy Space Center
› Back To Top