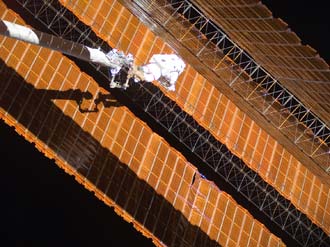 It was high drama on live TV. Mission Specialist Scott Parazynski worked while balanced at the end of an extended robotic arm, silhouetted against the brilliant orange glow of a partially extended solar wing. Marring the wing were two visible tears in the panels. This was no ordinary spacewalk, and it was destined to become the centerpiece for this exciting and highly successful mission that was far from routine.

Image at right: Mission Specialist Scott Parazynski rides at the end of the boom toward the rip in the solar wing. Image credit: NASA + View larger image

Bookended by an on-time launch and landing, the successful work on space shuttle mission STS-120 showcased outstanding talent and teamwork among the shuttle astronauts, International Space Station crew and mission team on the ground. 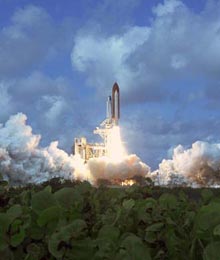 Lifting off into a blue Florida sky on Oct. 23, 2007, the perpetually upbeat crew already had a full agenda with five planned spacewalks. The primary payload carried aboard Discovery was the Italian-built U.S. Harmony module. This pressurized module is key to the following three shuttle flights set to carry the European Columbus lab and the two pressurized Japanese Kibo modules. Harmony provides the connecting point between these modules and the U.S. Destiny laboratory already in place, forming an international crossroads in space.

Getting down to business, the crew's inspection of Discovery went well and the shuttle showed no signs of damage from liftoff. The orbiter chased the International Space Station until the rendezvous on the third day of the mission.

With the shuttle safely docked to the station, the hatches were opened and a landmark moment took place. Shuttle Commander Pam Melroy and the station's Expedition 16 Commander Peggy Whitson made space history, marking the first time women commanded both spacecraft at the same time. 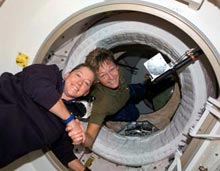 One of the first orders of business was a crew member swap, with Dan Tani joining the station crew in exchange for Clayton Anderson, who would return to Earth aboard Discovery after a five-month stint at the station.

Harmony in Space
Installing Harmony in its temporary location was the focus of the mission's first spacewalk conducted by Parazynski and Doug Wheelock. With the duo assisting from outside, European Space Agency astronaut Paulo Nespoli acted as spacewalk coordinator as Stephanie Wilson, Dan Tani and Anderson worked from inside using the station's robotic arm to remove Harmony from Discovery's payload bay and bring it into position beside the Unity module. During the six-hour spacewalk, Parazynski and Wheelock also worked atop the station, retrieving an antenna from the Z1 truss and readying the P6 for its move to the far end of the port truss. 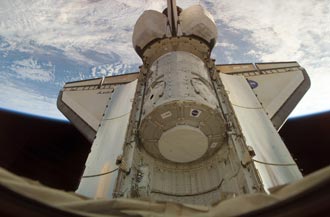 The following day was the "grand opening" of Harmony, which was named by schoolchildren. The module added 2,666 cubic feet of additional volume to the station, increasing the living space by nearly 20 percent. After Harmony's hatch was opened, Whitson and Nespoli were the first inside and they began set-up operations. After Discovery's departure, the station crew will relocate Harmony to its permanent location at the end of the U.S. Destiny lab.

Taking a Few Walks
Parazynski was paired with Tani for the mission's second spacewalk. On the agenda was the relocation of the P6 truss with its two folded solar wings. The P6 served as the original power source for the station from its temporary position atop the Z1 truss. Wilson and Wheelock worked the station's robotic arm to move the truss once the spacewalkers had unbolted it. As the robotic maneuver to relocate it was in progress, the two spacewalkers parted company, with Parazynski conducting external work on Harmony while Tani moved to the starboard truss to inspect a troublesome solar array rotary joint on the starboard side of the station. Tani collected samples of "shavings" he found in the mechanism. Later in the six-and-a-half-hour spacewalk, the two astronauts met up again to finish external work on Harmony. The P6 remained overnight on the robotic arm in a "park" position.

The next day, Wilson and Pilot George Zamka used the shuttle's robotic arm to take a handoff of the P6 from the station's arm, operated by Tani and Anderson. Once the station arm was relocated, Tani and Anderson used it to take back the P6 and hold it in position for the mission's third spacewalk. 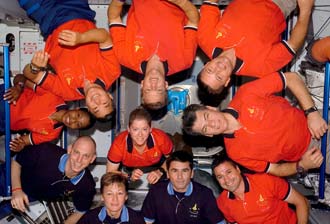 On that spacewalk, Parazynski and Wheelock were paired again to finalize the installation of the P6 in its permanent home at the end of the port side of the station. The installation was flawless, and Parazynski was asked to look at a rotary joint on the port side to use for comparison with the malfunctioning one previously examined by Tani on the starboard side. As the spacewalk drew to a close, the extension of the two P6 solar wings got under way from inside the station. The first went smoothly but as the second wing unfolded, a guide wire snagged, causing tears in two of the panels. With the wing 80 percent extended, the operation was halted and the spacewalkers came inside after seven hours. The partially deployed array was producing power, but a plan was needed to allow it to fully extend.

Planning Ahead, Going Beyond
In the ensuing three days, spacewalk repair plans were prepared round the clock on the ground while the astronauts prepared tools and repair materials in space. Using strips of aluminum, a hole punch, a bolt connector and 66 feet of wire, the crew constructed hinge stabilizers that would take the pressure off the damaged hinges on the solar array. They insulated tools with tape to protect against electrical currents produced by the array. 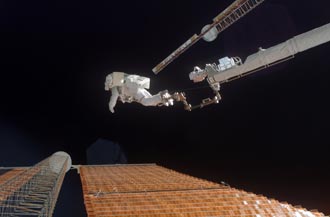 Image at left: Anchored to a foot restraint on the end of the boom, Scott Parazynski assesses his repair work as the solar array is fully deployed. Image credit: NASA + View larger image

The plan was to once again send Parazynski and Wheelock outside. Parazynski would work to make the repairs while positioned on the end of a boom normally used to inspect the shuttle. The boom would be attached to the end of the space station's robotic arm, operated by Wilson and Tani. Wheelock would be positioned near the station's truss to help visually guide the movement of the arm near the solar wing.

With plans and tools prepared, the day arrived and the two galactic repairmen once again ventured into space. Compared to normal spacewalks that have been practiced on Earth, this was uncharted water. Riding at the end of the boom, it took Parazynski about an hour and a half to reach the worksite, located about 165 feet down the station's truss and 90 feet out on the damaged the solar wing. With Wheelock positioned to help keep him at a safe distance from the array, Parazynski -- who is a doctor -- performed some delicate "surgery" on the damaged wing by cutting the snagged wire and installing the stabilizers made by the crew to strengthen the array's structure at the damaged area. 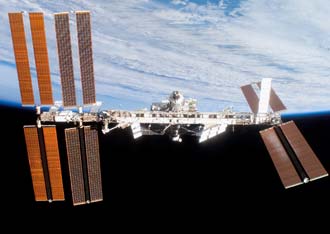 Once the repair was made, the robotics team backed the spacewalker off to a safe distance and the whole team, in space and on Earth, watched as the array was carefully deployed to its full length. They had success, after more than seven hours outside.

Image at right: The International Space Station has a new profile thanks to the construction completed on the mission. Image credit: NASA + View larger image

"This is truly a triumphant moment for NASA," Parazynski said later after landing. "I think we obtained the summit and then some."

Beautiful Day, Triumphant Return
With all the major work of the mission completed, a spacewalk by the station crew was postponed until after the shuttle's departure and diagnoses of the rotary joint problem was left for a later mission. The STS-120 mission was a resounding success and proof once again that learning to work in space is an important part of building the station.

The two crews said their goodbyes, and the shuttle crew prepared for its return to Earth after 15 days in space. Nov. 7 proved to be a beautiful fall day on the Florida coast, and space shuttle Discovery touched down on the first landing opportunity on runway 33 at NASA's Kennedy Space Center. After traveling 6.25 million miles on 238 orbits of the Earth, they were home. 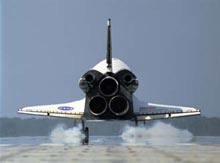 "When I look back at our mission, it seems like we kind of hit a triple home run," Commander Melroy said a few hours after landing Discovery. "It was an amazing thing to watch a large organization like NASA pivot so easily to tackle the problem."

Gaining experience during missions like STS-120 is key as NASA makes plans to return to the moon and travel on to Mars.