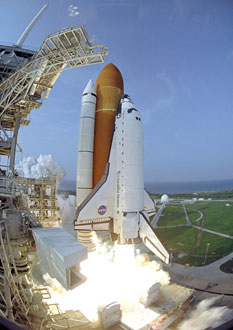 Every mission that adds to the International Space Station brings the first-of-its-kind orbiting research facility one step closer to completion. But the STS-118 mission went one step further by also reaching out directly from space to the next generation of explorers.

The 13-day mission was highlighted by a series of conversations between students on Earth and crew members including teacher-turned-astronaut Barbara Morgan, as well as installation of the S5 truss and external stowage platform 3. The crew also transferred equipment and supplies to the station on the flight, which was the last for the SPACEHAB module.

Space Shuttle Endeavour rose from its oceanside launch pad on time at 6:36 p.m. EDT on Aug. 8, 2007. The liftoff from Kennedy Space Center in Florida marked Endeavour's return to space after spending four-and-a-half years in an extensive overhaul period. The newly improved orbiter performed well during the climb to orbit.

The first full day in space focused on inspecting the orbiter's heat-resistant thermal protection system. The crew used the orbiter boom sensor system to methodically sweep over Endeavour's wings, nose cap and orbital maneuvering system in search of possible damage sustained during launch. The day concluded with a review of tools to be used during the upcoming rendezvous and docking with the International Space Station.

Flight Day 3 began with Commander Scott Kelly putting Endeavour through the rendezvous pitch maneuver, a slow-motion backflip below the station. This allowed Expedition 15 Commander Fyodor Yurchikhin and station Flight Engineers Oleg Kotov and Clay Anderson to take video and still images of the orbiter's underbelly. The images taken during the maneuver revealed areas of tile damage, and managers chose to do a focused inspection the next day to get a better look. 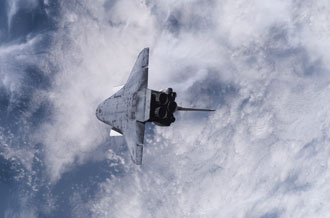 After docking, the shuttle and station crews opened the hatches between them and warmly greeted one another in a welcome ceremony. The day also featured the first activation of the new Station-Shuttle Power Transfer System, which enables the orbiter to draw power from the space station for an extended stay.

A more focused inspection of Endeavour's thermal protection system the following day revealed one particular area of concern: a 3.5-inch-by-2-inch gouge in the tile, apparently a result of foam that broke off the external tank during launch, bounced off one of the tank's struts and impacted the orbiter's underside. NASA's Mission Management Team, which meets daily during space shuttle missions, began several days of analysis on the tile issue to determine the best course of action. The team also announced the mission would be extended from 11 to 14 days due to the perfect operation of the new power transfer system, and added a fourth spacewalk to the itinerary.

On Flight Day 6, Williams and Mastracchio participated in the mission's second spacewalk, replacing a failed control moment gyroscope with a new, fully functioning unit. There are four such gyroscopes on the station: two to maintain the outpost's orientation and two backup units. 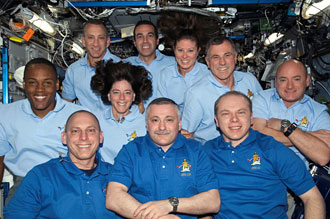 The day's activities continued with a question-and-answer session from space with students gathered at the Discovery Center of Boise, Idaho. During the event, Williams, Morgan, Anderson and Mission Specialist Alvin Drew answered a wide variety of questions submitted by inquisitive students, such as, "How does being a teacher relate to being an astronaut?"

"Astronauts and teachers actually do the same thing," Morgan answered. "We explore, we discover and we share -- and the great thing about being a teacher is we get to do that with kids."

Flight Day 8 was highlighted by the mission's third spacewalk, during which Mastracchio and Anderson spent more than five hours preparing the P6 truss and solar arrays for their move to the end of the P5 truss during the upcoming STS-120 mission. 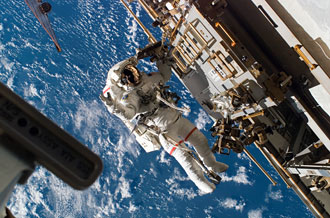 Mission Control ended the spacewalk early after Mastracchio discovered a small hole near the thumb of his left glove. The hole was in the second of five layers and did not cause any leak or danger to him. However, as a precaution, he returned to the Quest airlock while Anderson completed his final task.

Morgan and Drew spoke with students at the Challenger Center in Alexandria, Va., on Flight Day 9. June Scobee Rodgers, widow of Challenger Commander Dick Scobee, hosted the educational event in which students again had the chance to speak with the astronauts.

Later that day, the Mission Management Team announced its decision not to conduct a spacewalk to repair the tile. Days of testing and analysis on the ground had shown that the gouge was not a danger to the crew or the orbiter, and a spacewalk to repair it would have carried an additional set of risks.

Another concern soon appeared as computer models indicated the powerful Hurricane Dean could affect NASA's Johnson Space Center in Houston, home of Mission Control. Faced with the possibility that Johnson may need to close in the coming days, mission managers ultimately decided Endeavour would undock from the station one day earlier in order to land Aug. 21, one day ahead of schedule. 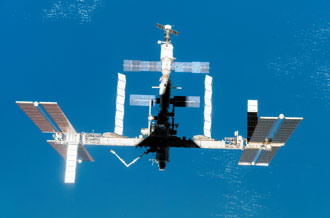 The mission's fourth and final spacewalk highlighted Flight Day 11, as Williams and Anderson spent about five hours working to install an antenna and a stand for the shuttle's robotic arm extension boom, as well as retrieve experiments from the station's exterior for analysis on Earth. Following the final spacewalk, the shuttle and station crews said farewell and the hatch closed.

Image to right: Backdropped by a blue Earth, the International Space Station, in its new configuration, moves away from Space Shuttle Endeavour. Image credit: NASA

Shortly after Endeavour undocked from the station the next morning, Mastracchio and Caldwell used the orbiter boom sensor system to conduct one final "late inspection" of the shuttle's protective tiles to ensure the thermal protection system was ready to withstand the trials of re-entry.

The astronauts spent their final full day in space stowing equipment and supplies and testing the orbiter's steering jets and flight control surfaces in final preparations for landing.

The STS-118 mission ended on Aug. 21 as smoothly as it started. After a perfect deorbit burn and a safe journey through Earth's atmosphere, Endeavour touched down on Kennedy Space Center's Runway 15 at 12:32 p.m. EDT, wrapping up a nearly 5.3-million-mile voyage designed to inspire future generations.