Experience Gets the Job Done
A dazzling June 8 launch of Space Shuttle Atlantis on mission STS-117 began as an 11-day mission to add more power capability to the International Space Station. 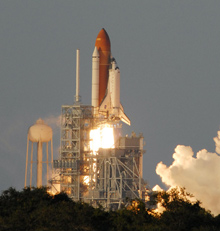 A late-February storm was no match for the hundreds of NASA and contractor employees who prepared the space shuttle for launch after the external tank was hit more than 2,000 times by hail during that storm.

Image left: Smoke billows away from the launch pad as Space Shuttle Atlantis lifts off on mission STS-117. This is the 118th space shuttle flight, the 21st flight to the station and the 28th flight for Atlantis. Photo credit: NASA/Ken Thornsley
+ View Larger Image

On the first day in orbit, the crew focused on inspecting Atlantis' thermal protection system. A robotic arm was extended out of the payload bay to look at the spacecraft's underside, nose cap and leading wing edges. The system looked fine, but the camera revealed that a corner of an insulation blanket on the left orbital maneuvering system pod had pulled away from the nearby thermal tiles.

On June 10, after closing in on the space outpost, Archambault piloted the orbiter into a backflip, called a "rendezvous pitch maneuver." This belly-up position gave the station's Expedition 15 crew members a chance to photograph the thermal protection tiles on the bottom of the vehicle.

After docking at 3:36 p.m. EDT, the hatches between the vehicles were opened and the station crew welcomed the Atlantis team with handshakes and hugs. Anderson replaced Sunita "Suni" Williams as station flight engineer. She would make her way back to Earth with the STS-117 crew.

Olivas and Reilly spent the night in the station's Quest Airlock in preparation for the first spacewalk.

After a slight delay to bring back online the control moment gyros that manage the attitude of the station, spacewalkers Reilly and Olivas completed a demanding work schedule on June 11. They installed and activated the S3/S4 truss segment with the help of Archambault, Forrester and Expedition 15 Flight Engineer Oleg Kotov, manipulating the Canadarm 2 from inside the space station. The six-hour, 15-minute spacewalk set the stage for the deployment of the solar arrays the next day.

Later in the week, NASA officials decided to add two days and a fourth spacewalk to the mission.

On June 12, with a vantage point high above the Earth, the International Space Station spread its wings with the activation of a new pair of solar arrays. The station controller began the unfurling in stages, pausing for the sun to warm up the arrays so they wouldn't stick together.

The extra power expands the capabilities of the space station to help support the European and Japanese laboratories that will be delivered on future shuttle flights.

Late that day, the station experienced a problem with a Russian navigation computers that challenged flight controllers in Houston and Moscow to manage the station's attitude in space. The computers provide backup attitude control and orbital altitude adjustments.

The crew or station was never in harm's way, and the orbiter took over attitude control throughout the troubleshooting efforts. 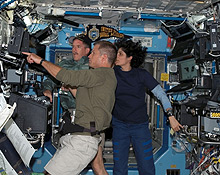 By June 16, the station crew was able to power-up most of the Russian central computer by using a jumper cable to bypass a faulty secondary power switch.

Forrester and Swanson had their work cut out for them during a seven-hour, 16-minute spacewalk on June 13. They removed the launch locks holding the 10-foot-wide solar alpha rotary joint in place, and helped retract an older solar array to make room for the new array's path.

The old arrays were a little balky, so Forrester and Swanson had to poke and prod about five-and-a-half bays' worth of panels to correctly fold them before moving on to the next item on their to-do list.

On June 14, the crew stayed inside the station to work on partially retracting a solar array. Reilly and Olivas also practiced procedures to repair the thermal blanket edge that was pulled loose during launch.

Reilly and Olivas were again called upon to venture out into space on separate tasks on STS-117's third spacewalk on June 15.

Working from the end of Atlantis' robot arm, Olivas tucked the blanket back into place and stapled it into position using a medical stapler and pins, safely securing the blanket for the ride home.

At the same time, Reilly installed a hydrogen vent on the station's Destiny Laboratory. The vent will be used for a new oxygen generation system.

The spacewalking duo then climbed to the top of the station's P6 truss and used specially designed tools to help fold up an older solar array so it can be moved from its temporary location to a permanent spot during a future shuttle mission.

Drawing from lessons learned on mission STS-116's challenge to maneuver the sticky array back into its protective box, and armed with on-the-ground practice, Reilly and Olivas had the skills needed to perform the identical task ahead of them. 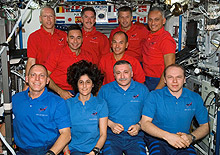 After working seven hours and 58 minutes in space, the astronauts called it a day.

June 16 was a special day, as Suni Williams broke the record for the longest single spaceflight by a female. "I was just in the right place at the right time," said Williams. "It's an honor to be here." She passed the previous record of 188 days and four hours, set by Shannon Lucid on a mission to the Russian Mir space station in 1996.

Although this was her first time in space, Williams also became the record holder for the most hours outside a spacecraft by a female, completing four spacewalks during Expedition 14. Williams wrapped up a six-month tour of duty following her flight to the space station on mission STS-116 in December 2006.

The STS-117 astronauts received the good news when Mission Control said the heat shield had passed muster and was confirmed safe for the trip home.

On June 17, Forrester and Swanson took center stage as they teamed up for the fourth and final spacewalk.

The twosome removed the last six solar alpha rotary joint launch restraints and prepared the joint for rotation. With the joint's activation, the station now has four U.S. solar array wings tracking the sun through each orbit of the Earth.

The astronauts not only completed all the mission tasks, but also finished some jobs that will mean a little less work for future spacewalkers. Their last jaunt in space took six hours and 29 minutes.

On June 18 Mission Control told the STS-117 crew members they were "go" to undock. The astronauts managed a few hours of rest, then said goodbye and Godspeed to their colleagues remaining on the station before the hatch closed that evening.

On June 19, Archambault backed the orbiter away from the station and performed a fly-around so crew members could collect images and video of the newly expanded station. Later, the astronauts used the boom camera to do a final scan of the thermal tiles, nose cap and wing leading edges to ensure a safe trip through Earth's atmosphere on landing day.

The crew spent June 20 preparing for the next day's landing at Kennedy Space Center's Shuttle Landing Facility in Florida. Unfortunately, stormy weather prevailed and both landing opportunities were waved off for the day.

The inclement weather held firm over Kennedy on June 22 for the first landing opportunity. Mission Control gave the returning astronauts the go-ahead for landing at Edwards Air Force Base in California.

Atlantis made a safe and smooth landing on Runway 22 at 3:49 p.m. EDT to the cheers and applause of the waiting crowd, wrapping up a 5.8-million-mile mission.

After "safing" the orbiter, the astronauts made the customary end-of-mission walk around Atlantis and lined up for photos. Sturckow and his crew spoke briefly to the media.

"There were a lot of challenges on this mission… They were all surmounted and all the solutions worked well," said Sturckow. "We had a very successful flight... Thanks to all of you..."

The STS-117 astronauts returned to Johnson Space Center on June 23 for a well-deserved rest and family reunion.

Their homecoming was celebrated by a traditional welcome-home ceremony at Ellington Field in Houston.