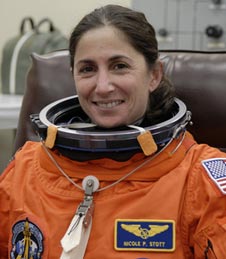 Image above: Stott suits up before her launch aboard space shuttle Discovery on Aug. 28, 2009. Image credit: NASA

Image above: Stott performs a spacewalk outside the International Space Station, her home for three months. Image credit: NASA 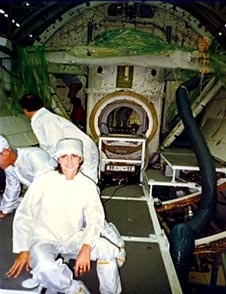 Image above: Stott began her career with NASA in shuttle processing at Kennedy. Image credit: NASA 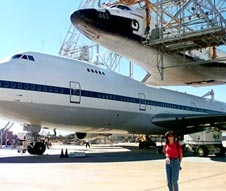 Image above: With space shuttle Endeavour aboard the shuttle carrier aircraft in the background, Stott, Endeavour's flow manager, stands on the shuttle runway. Image credit: NASA 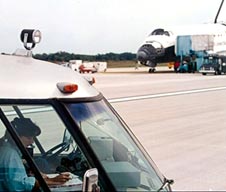 Image above: During part of her career at Kennedy, Stott (left) served as convoy commander for shuttle landings. Image credit: NASA


When the wheels of space shuttle Atlantis touch down to end the STS-129 mission, astronaut Nicole Stott will complete both a first and a last.

NASA's Kennedy Space Center in Florida will welcome her home as its first former employee to live and work aboard the International Space Station. Stott's return also will mark another significant event -- the last time a station crew member will travel to or from the orbiting laboratory aboard a space shuttle. Upcoming crews will launch from and return to Earth aboard Russian Soyuz spacecraft.

Stott joined the space station's six-person crew when she launched aboard shuttle Discovery in August during the STS-128 mission. Trading places with astronaut Timothy Kopra, she became the Expedition 20 flight engineer as she began her three-month stint aboard the station.

Her launch came more than two decades after she began her NASA career at Kennedy -- a career that brought her high-level experience with both the shuttle and the station.

Before heading to space this summer, the Clearwater, Fla., native talked about her time at Kennedy.

"After growing up in Florida and seeing shuttles launch while I was at university, I got a job at Kennedy Space Center in shuttle operations," Stott said. "I mean, what cooler place could you be working? And every step of the way there, I was just thrilled with the jobs I had."

She began her 10-year career at Kennedy in 1988, working in the shuttle program as an operations engineer in an orbiter processing facility -- the hangars in which shuttles are prepared for flight. She subsequently worked as convoy commander, leading the group of specialized vehicles that meet and "safe" each shuttle upon landing. She also served as shuttle Endeavour's flow director, NASA's manager in charge of seeing that the shuttle was processed and ready for launch.

Stott described her career at Kennedy with enthusiasm.

"I’m working on a space shuttle. I’m on the runway for landing... I’m in the control center where we’re launching the shuttle. I mean, it didn’t seem like it could get any cooler than that," Stott said. "And fortunately, I had people that I considered to be mentors that I worked with there."

It was during her last two years at Kennedy that she joined the Space Station Hardware Integration Office. That position took her to Huntington Beach, Calif., where she worked as the NASA project lead for space station truss elements under construction at a Boeing facility.

Launch: "2 words: Woo Hoo!! These words were exclaimed by me (maybe multiple times) through the ginormous smile on my face as we left the pad. And oh by the way, you don’t just leave the pad. You get kicked off the pad! The engines light and you feel the rumble, 6 seconds later the solid rocket boosters light and you are literally kicked off the pad and you have no doubt that you are going someplace fast! "

Spacewalking: "I still can’t believe I had the opportunity to step outside and spend 6 hours working outside of the comfortable protection of our space station."

Earth: "I have never been able to look at a picture of the Earth from space and not feel a sense of awe. Well let me just say that this is another case of the picture not doing the reality justice. The Earth, our planet, is indescribably beautiful... Every time I look out one of our windows I am surprised by some new and beautiful discovery."


Having experience with both shuttle and station hardware preparation, NASA selected Stott as an astronaut in July 2000. Nine years later, she reflected on her own launch aboard a shuttle and residency on the space station.

"Up until the point of starting work at Kennedy Space Center with NASA, it never crossed my mind that being an astronaut was a possibility. And once I started working there and meeting the people that worked there, and seeing astronauts come through and seeing what they did when they were there -- working with the hardware or getting their colleagues ready to fly -- it became more real to me," Stott said. "And then having people encourage me was, I think, the big step to actually getting here."

While other employees from Kennedy have gone on to become astronauts too, Stott's time living and working aboard the station, coupled with her shuttle and station processing work, makes her experience unique.

As the STS-129 mission ends and the landing convoy she once commanded surrounds Atlantis on the runway, Stott's journey will have come full circle, from Kennedy to space, and back home again.