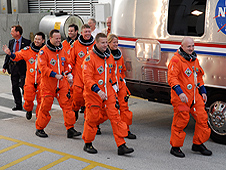 The crew of STS-124 donned pressure suits for a practice countdown before their mission began. It usually takes at least 20 minutes to put on the whole pressure suit. It is made of multiple layers and is liquid-cooled. Credit: NASA/Kim Shiflett
View Hi_Res Image 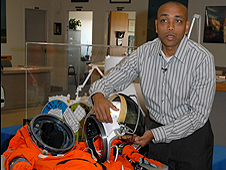 Crew escape technician K.C. Chhipwadia helps maintain the pressure suits astronauts wear during launch and entry. The helmet is a vital part of the ensemble and is equipped with high-tech items including a valve that senses when oxygen inside the tank is exhausted. The valve then lets outside air in so the astronaut can breathe. Credit: NASA/Amanda Diller
View Hi-Res Image 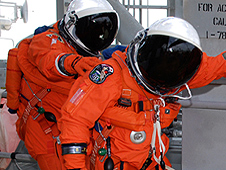 Astronauts practice leaving the shuttle quickly before each mission. Wearing their helmets and glove, the astronauts are completely enclosed in the safe atmosphere the pressure suit provides. The suit is equipped with oxygen bottles and survival gear. Credit: NASA/Kim Shiflett View Hi_Res Image


The technical marvel that is the space shuttle system does not stop with the spacecraft.

The spacesuits the astronauts wear during launch and landing are examples of high-tech clothing designed to hold communications equipment, oxygen tanks, parachutes and enough water for a day. All while keeping the wearer cool.

You won't see a bulky pressure suit weighing 91 pounds and painted orange on the fashion runways of Paris, but they are an essential element of any astronaut's wardrobe.

No one goes into space aboard a shuttle without one because it could be the key to keeping an astronaut safe in case something goes wrong.

"It's not really designed to walk around and move like a (spacewalking suit) is, it's really to stay seated and stay alive," Chhipwadia said.

That means it can take as long as 30 minutes to get inside one.

That's because the ensemble is several layers of thin clothing, not one big suit an astronaut climbs into and zips up. The orange part that everyone sees as the astronauts walk out to the Astrovan on their way to the launch pad is simply the top layer.

The astronaut starts with lightweight shirts and shorts and then puts on a shirt and pants that look like thermal underwear with an extensive network of tubes woven into them.

Water pumps through the tubes during the countdown to keep the astronaut cool. A set of plugs folded into a pocket on the outside of the suit connect to fittings inside the shuttle to move the water through the suit.

Then comes the orange outer layer, which actually is two layers on its own. The inner layer is a rubber-like material similar to a wetsuit. Chhipwadia describes it as the balloon part of the suit because it is what holds the air if the suit has to inflate. The outer part of the suit is a flame-resistant Nomex material that is much stronger than the inner layer and gives the suit its shape.

With the helmet, visor and gloves locked in place, the suit fully encloses the astronaut in an air bubble inflated to 3.5 pounds, about the same air pressure as a person would find 30,000 feet above Earth. That is slightly lower than the cruising altitude of many airliners.

That air pressure was chosen because the bailout scenarios for an astronaut in the unlikely event of an emergency call for the crew to evacuate the spacecraft at 30,000 feet, Chhipwadia said.

Once an astronaut gets out of a crippled shuttle, the suit is designed to act largely automatically.

For example, a pressure switch on the suit tells the main parachute to open at 14,000 feet. The harness has water-sensitive devices to detach the parachute when the astronaut reaches the water. Otherwise, the unconscious crew member could be dragged around the waves behind a billowing canopy.

Other water-sensing items deploy a life preserver around the astronaut in the water. The helmet is equipped with a valve that lets air in after the oxygen runs out in a pair of canisters in the harness. There also is a larger life raft in the suit, along with a bailing cup to scoop water out of the inside.

Once safely in the water, the crew member has a number of tools packed in the suit to help him summon rescue crews. A set of flares that burn bright enough to see even in bright daylight are tucked inside one leg pocket. A survival radio is in another.

Since the suit is designed to keep an astronaut alive for 24 hours, it carries a supply of drinking water.

NASA's spacesuit collection also is versatile. The agency has 12 different size suits for its astronauts, but they are not custom-fitted, which means they can be used by several astronauts over the course of many different missions.