Room to Move
Imagine if you could attach an enormous walk-in closet to your house for more storage room.

Seven astronauts set to fly aboard Space Shuttle Discovery will benefit from a similar arrangement. The commercially owned SPACEHAB logistics single module will serve as an extra "float-in closet" during STS-116, a 12-day mission to deliver hardware, supplies and a new crew member to the International Space Station. 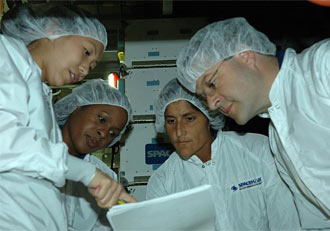 The SPACEHAB single module more than doubles the storage capacity of the orbiter's middeck. And because the 1,100-cubic-foot module is pressurized, powered and climate-controlled, it's a convenient "shirtsleeve" environment for the astronauts. They can enter through a tunnel connected to the middeck without ever having to suit up and step out into space.

On the STS-116 mission, the module is filled almost to its three-ton capacity. Mission Specialist Joan Higginbotham will serve as the "load master," overseeing the transfer of the module's 5,800 pounds of cargo to the International Space Station. Items to be delivered include crew essentials like food, clothing and water containers, as well as spacewalk tools, a television camera and critical spare parts.

The crew will free up room on the station by loading the SPACEHAB module with Russian Elektron oxygen generator and waste containers for the return trip to Earth.

Behind SPACEHAB in the payload bay are the P5 integrated truss segment and another SPACEHAB product: the integrated cargo carrier. Measuring almost 14 feet wide and 7.5 feet long, this versatile carrier acts as a shelf inside the bay. Cargo attached to either side of the carrier can be accessed by the shuttle's robotic arm or by spacewalking astronauts. 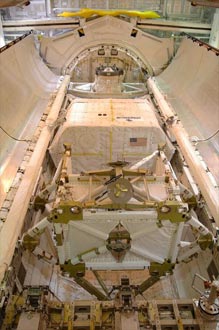 Among the equipment mounted on the carrier for STS-116 are debris panels to shield the station's Zvezda service module from micrometeorites, and three tiny microsatellites to be deployed late in the mission.

SPACEHAB modules and integrated cargo carriers are prepared for launch at the company's own SPACEHAB Payload Processing Facility in Cape Canaveral, Fla., near Kennedy Space Center. When the hardware is tested and certified to fly, it is transported to Kennedy and installed in the shuttle orbiter. The SPACEHAB logistics single module flying on STS-116 was installed along with the other payloads into Discovery's payload bay on Nov. 11.

Image to left: With the payload successfully installed inside, the payload bay doors on Space Shuttle Discovery are closing. Seen here are (from top) the SPACEHAB module, the P5 truss and the integrated cargo carrier below. Image credit: NASA/Dimitri Gerondidakis

The modules can be configured for cargo or science research experiments, and come in single or double sizes, depending on the mission's unique needs. The first SPACEHAB module, configured for research, lifted off on Space Shuttle Endeavour on mission STS-57 in 1993.

Another SPACEHAB logistics module and integrated cargo carrier are slated to fly aboard Space Shuttle Endeavour on the STS-118 mission, scheduled for launch in 2007.