Modified Jet Stands in for Landing Orbiter
Diving head first at a concrete strip from six miles up is not necessarily fun, but is certainly important for NASA's shuttle commanders and pilots.

After all, commanders get one shot to land the 110-ton orbiter as it glides back to Earth. There's no chance to fire up the engines and make another approach. 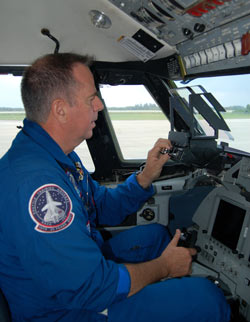 Image right: Jack "Trip" Nickel is a NASA Research Pilot who helps train space shuttle commanders and pilots to land the orbiter as it is returning from space. Photo credit: NASA/Steven Siceloff

But the opportunity to make the flight at the controls of an orbiter is exceedingly rare, even for the best astronauts. And a normal flight path for the orbiter is well beyond normal for a conventional aircraft.

"The shuttle has the flying characteristics of a brick, basically, with wings," said Jack "Trip" Nickel, a NASA research pilot.

So the space agency outfitted four of its corporate jets with computers and a shuttle cockpit and controls. Then it modified the wings' control surfaces and thrust reversers and strengthened the main landing gear.

The result is a Gulfstream GII dubbed a Shuttle Training Aircraft that reverses its engines in flight routinely, flies with its two sets of main landing wheels down at speeds above 300 mph and pulls out of a steeper dive than any airliner is likely to see -- all without breaking into pieces.

"It's still scary," Nickel chuckled. "In a plane like this, a corporate jet, there is no sky visible out the front cockpit. All you see out the window is dirt, there is absolutely no sky. So it's a very ominous feeling. With the engines in reverse thrust, you're hanging in your harness." 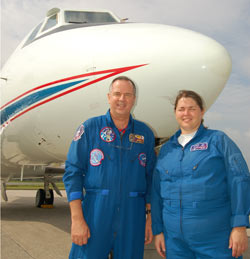 Image left: Jack "Trip" Nickel and Alyson Hickey crew the Shuttle Training Aircraft during simulated shuttle landings. Nickel makes sure the aircraft is flying safely and Hickey monitors the computer onboard the aircraft and plays the role of a shuttle pilot calling out cues to the training astronaut. Photo credit: NASA/Steven Siceloff

NASA built a pair of computer-driven simulators that never leave the ground to let pilots practice, but there was still a gap between those and the physical challenge of flying the actual orbiter. That's where the Shuttle Training Aircraft, or STA, come in.

"You get the real dynamics of real air going over the aircraft (and) you just can't model that with a computer," Nickel said. "There's just no comparison to being out in the real air, seeing the real landing aids. This is just the real thing."

The purpose is to give the astronaut the best impression of what the real orbiter will feel like and exactly what the correct approach to the runway is supposed to look like.

It "moves a shuttle pilot's eye through the sky along the flight path he would follow if he were flying the space shuttle," Nickel said. "It flies just like the shuttle. It emulates the shuttle exactly." 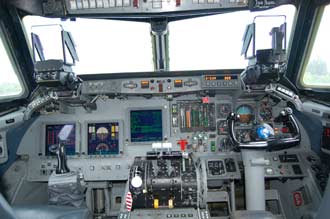 Image right: The Gulfstream G-II was modified several ways for its shuttle simulator role. Unlike the regular business jet with two sets of identical controls, the Shuttle Training Aircraft is outfitted with an orbiter cockpit on the left side of the cockpit and a set of conventional controls and displays on the right. During a landing simulation, the astronaut typically sits in the left-hand seat and the instructor pilot watches closely from the right-hand seat. Photo credit: NASA/Steven Siceloff

The wing and engine modifications are the tools that a set of computers inside the aircraft use to make the shuttle pilots feel like they are flying an unpowered spacecraft. That means the pilots are in charge, but the computers are in control.

When the astronaut pulls the control stick back, for example, the computer decides how a real orbiter would react. Then the computer moves the wing and tail to make the STA act the same way. The movement takes a scant 50 milliseconds to occur, though, so the pilot senses no delay.

"The computer controls the airspeed and the auto-throttle controls the engines," explained Alyson Hickey, a flight simulations engineer aboard the STA. 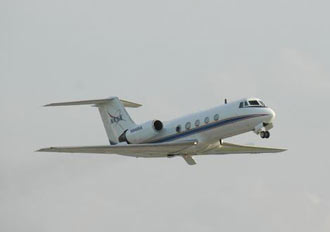 During a simulation flight, she sits just behind and between the astronaut on the left and the instructor pilot on the right. Since the instructor pilot such as Nickel is making sure the aircraft is safe during the unusually demanding landing, Hickey plays the part of the shuttle astronaut that would be sitting in the right-hand seat in an orbiter.

That means she calls out milestones to the commander and makes sure the simulation is true to the real thing.

Sometimes, Nickel and Hickey team up to throw a problem at the practicing shuttle commander. This could be anything from the computer display guiding the pilot astray to a system failing at a bad time.

The landing pattern of the orbiter demands that the Gulfstream fly at about 300 mph at times in a dive that is several times steeper than that of an airliner. At the same time, the thrust reversers and deployed main landing gear add more stress to the STA.

"This aircraft is at the structural airspeed limits in simulation (mode)," Nickel said.

The reward is a realistic training session for pilots that get only one shot to glide the orbiter to a landing during a real flight.