Landing support workers rehearsed the careful processes that will be needed to lift the space shuttles off Shuttle Carrier Aircraft when they are taken to new homes at museums across America. The process was practiced at the Shuttle Landing Facility on the ramp near the permanent Mate-Demate Device. Photo credit: NASA › View larger image 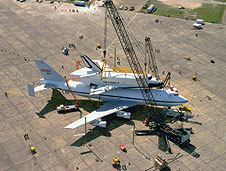 Space shuttle Enterprise was the last to be lifted off a 747 carrier aircraft when it was taken to Dulles International Airport near Washington, D.C. ahead of its display at the Smithsonian Institution. It's been more than 20 years since some of the machinery was used to lift a shuttle. Photo credit: NASA › View larger image 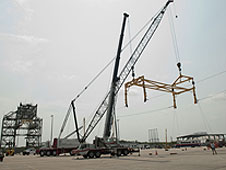 It will take about 45 people to lift the shuttle off the back of a 747, process workers are evaluating carefully before doing it for real. Photo credit: NASA/Jim Grossmann
› View larger image

It will take two large cranes, a specially built sling, four masts and about 45 people to perform the complex maneuvers to safely lift a space shuttle off the back of a modified 747. Because it hasn't been done in more than 20 years, teams rehearsed the lift on the Shuttle Landing Facility's ramp at NASA's Kennedy Space Center in Florida. It is a scene coming soon to Washington, D.C., Los Angeles and New York as NASA's shuttles are handed over to museums for public display. Each of those cities will receive one of the shuttles, including Enterprise, the prototype shuttle used to prove the design could glide safely to a landing after returning from orbit. One of the shuttles, Atlantis, will be displayed at Kennedy. "People have different emotions about it, but I'm kind of honored to put them in their final display location," said Casey Wood of United Space Alliance's Integrated Landing Operations. He is part of the team that will oversee the work. During the more than 30 years the space shuttles were in development and launching, they have been lifted onto and off of 747s numerous times, most often when the shuttle landed at Edwards Air Force Base in California. Those moves were performed by specially designed structures at Kennedy and in California called "mate-demate devices." The MDDs, as they are called, are shaped to let the 747, called the Shuttle Carrier Aircraft, or SCA, wheel in beneath a sling that lifts and holds the shuttle. Only once did a shuttle not land in either location, and that was back in 1983 at White Sands Space Harbor in New Mexico. Had the shuttle made an emergency landing overseas or at a different runway, the mobile system would have been taken there to load the shuttle to the SCA. The mobile lift system was used in 1985 when Enterprise moved to Washington, D.C. "This system has been stored in cargo containers for more than 20 years, and that's why we wanted to do the test," Wood said. "We were just missing the plane and the orbiter." The shuttle will weigh about 175,000 pounds -- more than 87 tons -- when it is readied for public viewing. That's a heavy enough load to cause a crane's boom to flex slightly. "The actual lift is probably the biggest challenge," Wood said. "With our lift, we can only go directly up or directly down. It's strictly vertical, there's no lateral movement." To get it right, the team trucked all the gear out of storage over to the Shuttle Landing Facility and set it up. The sling is almost identical to the ones used at the MDDs, used to hoist the shuttle and mate or demate to the SCA. This sling was used in Palmdale, Calif., where the shuttles were built, and used to lift the shuttle there. The setup includes four masts that connect to the sling. "That gives us our steadiness and wind restraint," Wood said. They had to drill about 200 holes in the ramp to anchor the different elements firmly. With everything in place, they can perform the work in winds up to about 20 mph. With this test accomplished, Wood said the team is reworking a few procedures to adapt them to the different locations. Discovery is scheduled to be the first shuttle to go through the operation for real, when it is ferried up to Washington, D.C., for display at the Smithsonian's Air and Space Museum in the spring of 2012. Steven Siceloff
NASA's John F. Kennedy Space Center
› Back To Top