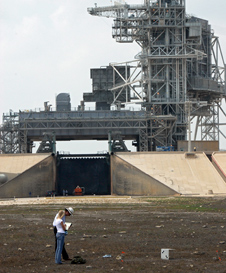 Workers catalog debris scattered across the area outside the perimeter of Launch Pad 39A at NASA's Kennedy Space Center. The debris is residue from the damage that occurred during the May 31 launch of space shuttle Discovery. Photo credit: NASA/Kim Shiflett
View Hi-Res Image 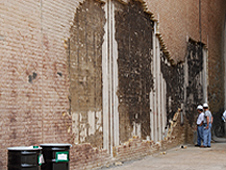 Workers look at the damaged wall of the flame trench at Launch Pad 39A. About 3,500 fire-resistant bricks dislodged from the wall during the STS-124 launch. Photo credit: NASA/Kim Shiflett
View Hi-Res Image


With its protective bricks torn away by the recent space shuttle launch, the flame trench at Launch Pad 39A will be given a new layer of protection in time for the next space shuttle liftoff.

The flame trench channels the flames and smoke exhaust of the shuttle's solid rocket boosters away from the launching spacecraft.

A swath of about 3,500 protective bricks tore away from the walls of the structure when space shuttle Discovery lifted off May 31 to begin its STS-124 mission. None of the bricks bounced back in the area of the shuttle. Preliminary computer models of the exhaust pattern suggest no likelihood of loose bricks coming back to the mobile launcher platform or the shuttle.

Just as a swimming pool is coated with a protective layer before it is soaked, the flame trench will be sprayed with Fondue Fyre, a fire-resistant concrete, to shield it from fire and smoke. Sections of the flame trench already are protected by Fondue Fyre. A shuttle program meeting was held Thursday to solidify many of the details of the repairs.

Atlantis is targeted to lift off from pad 39A Oct. 8 on the STS-125 mission to service NASA’s Hubble Space Telescope.

"We are very confident we will get it fixed before the Hubble mission," said Ed Mango, deputy director of the shuttle's launch processing team and the launch director for STS-125.

The bricks protect the reinforced concrete structure of the flame trench from 7 million pounds of thrust generated from the SRBs and temperatures of 2,600 degrees.

NASA’s Perry Becker, who is leading the engineer investigation and repair effort, said it is too early to tell why the wall came apart during liftoff. The wall was built in 1965 and has endured 82 launches, including 12 liftoffs of the Saturn V rocket.

Each of the bricks weighs about 19 pounds each and the tongue & groove design allows them to interlock with each other for additional support. The force of the shuttle's solid rocket boosters carried some of the bricks approximately 1,800 feet from the launch pad.

Engineers will remove brick from the wall with the damage and also may remove some sections of the opposite wall.

Becker said the walls are inspected after each launch. The only similar damage came during a launch in the mid-1980s when about 800 bricks were stripped off the floor of the flame trench on Launch Pad 39B. "Historically, we've not had this kind of damage to repair," Becker said.

The flame trench at pad B also is being tested for signs of weakness. That pad, which is a twin of the other launch pad, will be used in case a shuttle has to be launched to aid the STS-125 crew.

Mango said he has no doubt both pads will be ready for the October mission.

"I'm not too worried about it getting fixed," Mango said.