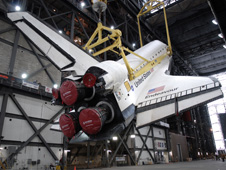 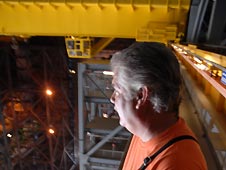 Lead Mechanical Technician Del Dewees stands on the catwalk 467 feet above the floor, with the 325-ton crane's cab visible in the background. Image credit: NASA/Cheryl Mansfield 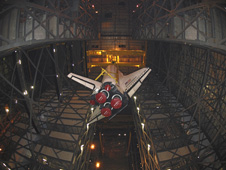 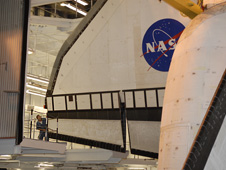 Before each mission, the space shuttle designated for that flight is rolled from its processing hangar to the center transfer aisle of the massive Vehicle Assembly Building at NASA’s Kennedy Space Center in Florida. Once there, the process begins to first raise the shuttle to a vertical position, take it up and over a 170-foot high transom, and then carefully lower it into one of two high bays where the external fuel tank and twin solid rocket booster are waiting on one of the mobile launcher platforms.

“It’s a ballet, it really is,” says Del Dewees, a lead mechanical technician and veteran crane operator or ground controller for more than 95 shuttle lifts, “but it’s fun once you’ve done it a couple dozen times.”

The process, which calls for a team of about 16 technicians and normally takes between 20 and 24 hours, requires skill and precision. At the center of the operation are two pairs of crane operators and a ground controller. Once the shuttle is maneuvered into the vertical position using a 175-ton crane, it's disconnected and attached to a 325-ton crane. The operator, located in a tiny cab 467 feet above the floor, begins the lift as the ground controller guides him from below.

While all the focus would seem to be on the crane operators, Dewees says the harder and equally important job is that of the ground controller, who acts as the eyes of the operators.

“Ground control is a lot harder than operating the crane. That’s the hard part, but the fun part too. You’re their eyes.” he says. “Crane operating is one thing, but they’re doing what they’re told to do. But ground control, that’s the guy who really has to coordinate both cranes and they have to do exactly what he tells them, and then he has to fine tune it. You have to pick it up horizontally and you have to rotate it with both cranes. When it comes out great, it looks like there’s nothing to it.”

Dewees assists in certifying the roughly 40 operators trained in the serious work of maneuvering the space hardware high overhead. In addition to the crane operations, the team is responsible for the maintenance and operation of more than 800 pieces of equipment in the cavernous building, including the giant doors, which they must ride to the top for service. Given the scale of the building and the jobs involved, it’s obviously not a place for the faint-hearted.

Certainly a calm and steady hand is required as the crane operator guides the dangling shuttle toward the high bay.

“We take it out in the middle of the bay so we can pirouette it, then bring it back on the mark," says Dewees. “We have to get it perfectly lined up before we lower it down.”

Once inside the high bay, there is little margin for error. “Between the platforms, which are retracted, and the tank, you have interference from the wings, and you have just inches of clearance,” he explains.

With a description like that, many people might think his job sounds stressful, but not Dewees. He grew up near the space center and remembers driving in the truck with his father as they heard the sound of pilings being driven during construction of the Vehicle Assembly Building. He watched as the Mercury astronauts lifted off from Cape Canaveral to pioneer American spaceflight. Even after working around space hardware for almost 30 years, he says simply, “it’s one of those jobs that never gets old.” Cheryl L. Mansfield
NASA's John F. Kennedy Space Center
› Back To Top