Grow Text SizeShrink Text Size
Where to Land the Shuttle
It's a spectacular event you won't see from anywhere else, but from NASA's Kennedy Space Center. 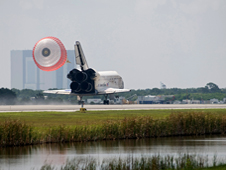 A bright orange moon served as a backdrop for space shuttle Endeavour as it soared through the night sky and penetrated the sound barrier Nov. 14. But when it's time to return to Earth, Kennedy isn't the only option.

So where will Endeavour and its STS-126 crew land Nov. 30? The preferred site is the shuttle's home base at Kennedy -- but there's also Edwards Air Force Base in California and White Sands Space Harbor in New Mexico.

About a week before every launch, more than 40 NASA and contractor employees fly out to the alternate landing sites.

"These folks stay the entire mission," said Michael Kuta, integrated landing operations manager for United Space Alliance. "After launch and prior to landing is when we activate EOM, or end of mission, where we send another eight folks to White Sands and another 75 to Edwards."

Weather plays a key role on where the space shuttle touches down. Because rain can damage the shuttle's sensitive heat shield or more importantly cause the giant glider to lose speed and potentially not reach its intended landing spot, there can't be any rain showers within 30 miles of the landing site. Also, visibility has to be top-notch for the pilot to glide the shuttle safely to Earth -- and with Florida's finicky weather, clear skies aren't always a guarantee. 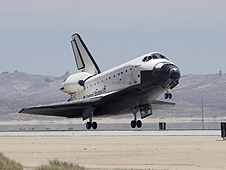 "Edwards is much like it is here, with the same capabilities as far as runway and convoy operations," Kuta said. "The only difference is we tow the orbiter to the Mate-Demate Device at Dryden, instead of the orbiter processing facility at Kennedy."

Astronauts and their vehicles are no strangers to the California landing site. In fact, there have been 51 landings at Edwards since NASA began flying space shuttles in 1981 and crews practice landing there before every mission -- although this time around, it's a little different.

"If we land there, it will be on a temporary runway that was constructed last year," Kuta said. "The main runway is being refurbished and will be complete before the STS-119 launch (targeted for Feb. 12, 2009)."

Space shuttle Columbia on mission STS-3 was the first and only to make use of the White Sands landing facility in March 1982. The winds were so high, dust and sand added weeks of cleaning time to processing. 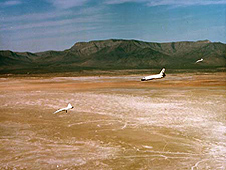 
"The turnaround area relocated, so wind isn't so much of a factor now," Kuta said. "It can still take about 28 to 30 days to prepare a shuttle for its return to Kennedy because of limited capabilities."

So what happens if Endeavour and its crew land at either alternate location? Kuta says about 40 members of the deorbit burn team will fly out of Orlando International Airport the day of landing and a team of about 180 Kennedy employees will charter an aircraft the next day to support turnaround operations.

Once the shuttle is ready, a Boeing 747, known as the Shuttle Carrier Aircraft, will ferry it back to Kennedy.