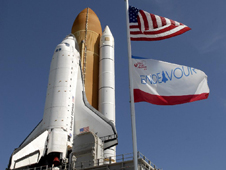 For 50 years, NASA's been famous for counting backward from 10 to zero. But a final countdown is now under way that will stand out among them all.

After 130 space shuttle missions, only four remain before the fleet is scheduled to retire. That's four flights remaining to use the unique capabilities of the shuttle to finish construction on the International Space Station and prepare it for life after shuttle. Each flight is unique and extremely complicated. Attention to detail and planning will be needed to be successful. There are no easy flights remaining and there may be pauses in this countdown that will ensure the highest chance of mission success. The shuttle will fly each flight when it's ready.

Take the time to look and really study the remaining shuttle flights. Here's a close up look at the countdown of flights: 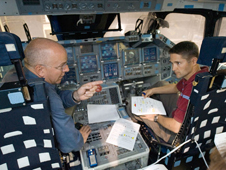 Much of the science done on the International Space Station involves difficult-to-understand concepts with long, hard-to-pronounce names. But the STS-131 mission will prove that's not always the case. The experiment racks space shuttle Discovery will deliver to the space station inside its multi-purpose logistics module focus on things regular people here on Earth do every day: exercise and look out the window.

The experiment racks that STS-131 will deliver to the station – the window observational research facility and the muscle atrophy research and exercise system rack – are pretty much exactly what they sound like. The window observational research facility is designed to beef up the work that astronauts are able to do looking out the window of the Destiny laboratory by adding cameras, multispectral and hyperspectral scanners, camcorders and sensors. With those instruments, the crew will be able to study global climates, land and sea formations and crop weather damage like never before.

Meanwhile, the muscle atrophy research and exercise system rack – or MARES – will give the crew members a way to assess the strength of their muscles while in space. The deterioration of muscles not used while astronauts are floating in microgravity has long been a concern for space programs. This rack will mean that the crew members don't have to wait until they're back on solid ground to find out how their time in space affected their health. Instead, the MARES will help them exercise seven different human joints, gauge the strength of the muscles around those joints and decide how the countermeasures designed to prevent muscle atrophy are working. 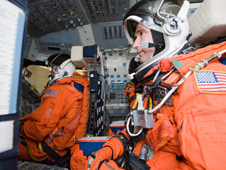 The last International Space Station modules to be delivered by a space shuttle will come up on the STS-132 mission.

The last space station module to be delivered by a shuttle also happens to be the first Russian module delivered to the ISS by a shuttle. It will be filled, for the launch, with pressurized U.S. cargo, installed by a Canadian robotic arm and include a European robotic arm – all of which underscores once more the very international nature of the International Space Station.

STS-134 is scheduled to bring up the Alpha Magnetic Spectrometer. Designed to detect cosmic rays, it should continue the tradition of discovery that the space shuttles have fueled for almost three decades. 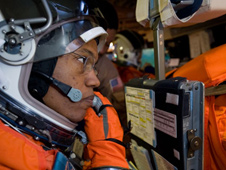 STS-133 is packed to the brim with one last load of spares.

There are debris shields for the Zvezda service module, and antennas for the S-Band communication system. There's a spare ammonia tank assembly, a spare flex hose rotary coupler, several remote power control modules and even a spare arm for the Special Purpose Dexterous Manipulator.

Besides, even though none of the equipment will actually be installed, it will still take at least three spacewalks to get it all in position to be ready when needed. And this flight will also be used to try out a new relative navigation sensor that could be used on future vehicles that will take astronauts to the International Space Station. So there should still be excitement to spare, as well as equipment.

Shannon said it's hard to imagine the end of the program at this point, but he expects it to be bittersweet.

"So the space shuttle will have done a good job.”
› Back To Top