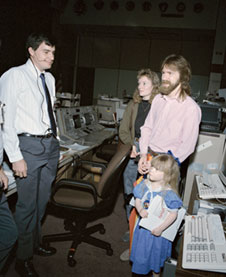 From left, NASA's Steve Stich explains Mission Control operations to Dallas-area family Terry, Mark and MacKenzie Shelton during a visit to the center in 1990. The family quietly sent flowers and well wishes to Mission Control in 1988 during mission STS-26 to show support for the shuttle's return to flight after the Challenger accident. The gesture began a 21-year tradition that has become a staple for Mission Control. During shuttle mission STS-119, the family will again visit Johnson Space Center to deliver the 100th set of flowers in person. Photo credit: NASA

For 21 years and 100 shuttle missions, Mission Control has been graced with a bouquet of roses, displayed proudly amid trademark data screens and tracking maps. Delivered during each mission, the flowers come with a simple card wishing all well.

They have become a staple for the team in Houston, and they have become a tradition for a family near Dallas. The bouquets include a rose of a similar color for each astronaut in space during the mission, plus a single white rose in memory of those astronauts whose lives have been lost in NASA's exploration of space.

They first arrived during mission STS-26 in 1988, the flight that returned the shuttle to space following the 1986 Challenger tragedy. Welcomed by the busy team of flight controllers, their origin was a mystery.

"When I first walked into the control room I noticed them right away, because it was so different, and I walked over and read the card," said JSC Associate Director Milt Heflin, who was a shuttle flight director at the time. "It was very simple, saying congratulations and wishing everyone the best on the mission. It was signed but it didn't have any contact information for the senders."

The card was signed by Mark, Terry and their daughter MacKenzie Shelton. Heflin took the initiative to find out how to reach the family.

Mark Shelton has been a fan of America's space program since a childhood trip to visit Johnson in the 1960s. Following the Challenger accident, he wanted to find a quiet, personal way to let NASA know that he and his family support the agency's work. He pondered the thought of sending flowers to Mission Control as NASA prepared to return the shuttle to flight following that accident.

"I didn't actually decide to do it until the day the STS-26 mission was to land, and I didn't know that I even could get it done in time," Shelton said. "I called information to find a florist near the space center, and then I asked the florist if they could deliver roses to Mission Control. At first they said they couldn't do it ... but then they said they would try. But I had no idea if they actually made it or not."

Heflin made a personal call to thank the family promptly after Discovery landed, confirming to Mark Shelton that his effort had succeeded. The rest became a part of space shuttle program history.

"It really impressed us that NASA took the time and reciprocated on such a personal level," Shelton said. "We just wanted to show in our way the appreciation that we think many, many people feel for the space program." 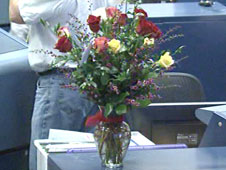 Mark, Terry and MacKenzie Shelton receive thanks from the crew of STS-119 for sending flowers to Mission Control for the past 100 shuttle missions.
› View This Video

The flowers have become a tradition for the Sheltons, and they have found a place at the heart of mission control. NASA's activities sometimes get worldwide attention, but these flowers seem to have a longer and deeper effect on the team of flight controllers. Why?

"I think it means so much because we never asked for it," Heflin said. "We never expected it. We believe it truly represents the sentiment of a large part of the public, as well as a very personal gesture."

And that is just the reaction hoped for long ago by Mark Shelton.

"It makes me feel that it has been the right thing to do," he said. "I never dreamed it would become the sort of personal connection it has, though. Sometimes we get Christmas cards from people in mission control, or letters, and we were invited to a launch and to visit JSC. We just wanted the flowers to mean something to them and to let them know we are still out here and we still care."

"The Sheltons have sort of become a part of our team in Mission Control," Heflin said. "I almost look at them as a kind of distant back room, just like the technical support rooms located around the control center. It gives me a very warm feeling."

NASA will honor the Sheltons during the landing of STS-119, as they visit Johnson and are recognized in ceremonies on Friday, March 26. Media may cover those activities and interview the Sheltons by contacting the JSC newsroom.
› Back To Top