Space Artist Draws from Experience
Ron Woods is one of the few people to effectively capture spacesuits in their native habitats. 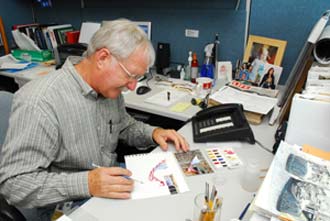 Designed to keep humans alive in the void of orbit and on the moon, the rugged garments nevertheless spend almost their entire lives in pristine rooms on Earth.

It is there that Woods finds them and brings their stories to life.

Image right: Ron Woods paints at his desk during his lunch breaks. He often has several projects going at once. Photo credit: NASA/George Shelton

"To me, there's nothing more artistic than a spacesuit," Woods said. "They're just real interesting pieces of hardware to me and I just started painting them."

The details can be as complex as a wrist joint on an Apollo glove, or as simple as a layer of gold-tinted capton tape over an air gauge on a breathing apparatus.

"Getting the lighting (effects)," Woods said. Pointing to a painting of Jack Lousma making a spacewalk on the Skylab space station, Woods said it was important to give the spacesuit a glow because of the sunlight reflecting off the station. 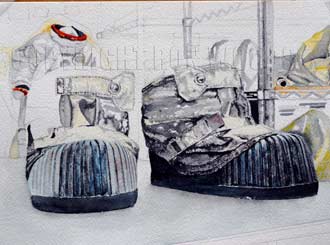 As the overseer of the flight crew equipment preparation at Kennedy Space Center in Florida, Woods is never far from his subjects. He and his team pack up all the gear each shuttle carries in the crew cabin for a mission.

Image left: A watercolor develops of a pair of boots that have been on the moon. Image credit: Ron Woods
+ View large image


That can be anything from prepackaged lockers to custom tools. It also includes readying what are known as EMUs, the bulky white outfits astronauts wear when they make spacewalks. EMU stands for extravehicular mobility unit.

Woods was already a veteran spacesuit preparer by the time the space shuttle astronauts started using the EMUs. He had dressed Buzz Aldrin for the Apollo 11 mission and Jim Lovell before Apollo 8, and aided the crew of the Apollo-Soyuz flight and the first two space shuttle missions. 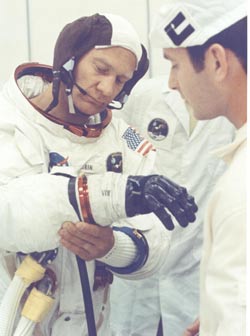 His NASA career began in Houston, though, at Johnson Space Center. Woods was a living mannequin of sorts when engineers didn't know what spacesuits would work best on the moon. The drive to produce an outfit that would keep astronauts safe but still allow them to move around comfortably produced a number of different designs.

Image right: Ron Woods helped Buzz Aldrin suit up before the Apollo 11 launch in July 1969. "We were more nervous than they were," he said. Photo credit: NASA/KSC
+ View large image

That's where Woods came in. Sometimes testing meant simple fittings. On other occasions, he would have to wear the suit while running on a treadmill or climbing a staircase in a laboratory.

The job was an ideal fit for a man who sees elegance in technical machines and was already developing his artistic skills.

His portfolio includes some 200 originals in watercolors and oils, including works of spacesuits of all sorts, but the attire that made its way to the lunar surface remains his favorite. He has also painted beach scenes including a wood-paneled station wagon on Cocoa Beach. Space equipment is his passion, though.

Several of his paintings are displayed at locations around Kennedy, and the center’s Visitor Complex sells some of his prints.

It's "the fascination of looking at it from the standpoint of here's something that was manufactured on Earth and has supported life on the moon and still held up as well as it did," Woods said.

His latest project is a watercolor of Pete Conrad's spacesuit from Apollo 12. 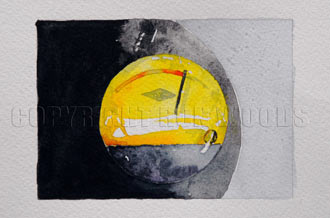 It was noteworthy, Woods explained, because as much as technicians kept the white garment clean on Earth, the moon's dusty gray soil relentlessly collected from the boots to the arms to the upper torso.

Conrad and Al Bean even joked about the dust during the flight.

"Some people paint seascapes and boats, and being exposed the last 40 years to hardware and the way it's packaged for flight . . . pieces that have actually gone to the moon and back, I guess that's what keeps my interest up and makes me want to work and paint these so people can see it from a hardware standpoint."

The paintings are also a way to bridge the gap between the workers and space itself.

"As close as we were (to spaceflight), that's as close as we ever got. You never got to fly and I'm sure that any of us that have ever worked on a spacecraft have always had that dream of flying, so maybe this is the next best thing, to put it in a history form of something that a lot of people don't get to see," he said. 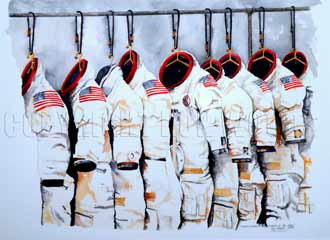