It's a Jungle Out There!
A close encounter of the "bird" kind during last year's return-to-flight launch of Space Shuttle Discovery prompted NASA's Kennedy Space Center in Florida to look at ways to reduce the possibility of future occurrences.

During the launch, a large vulture struck the top of the external tank during ascent. Now Kennedy is taking precautions to avoid another encounter with a large bird. 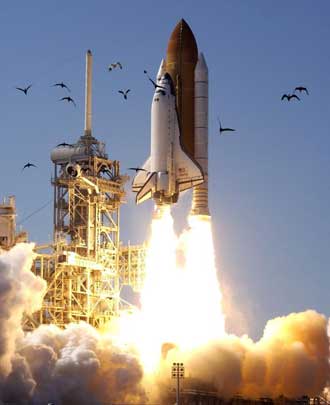 Image at Left: While it might make a good picture, birds like those seen during this liftoff of Space Shuttle Atlantis on mission STS-110 can pose a serious hazard to the orbiter and crew. New programs being tested aim to limit the possibility of birds striking the space shuttle during launch. Image credit: NASA

Even a veterinary pathologist from Disney's Animal Kingdom in Florida, which has a bird control program, was invited to the center to share wildlife management expertise.

Part of the plan involves determining ways to reduce the vulture population at the space center. "First we wanted to look at the root of the problem, which is the food source, and create an awareness program to help remove that source," said Steve Payne, a NASA test director in the Shuttle Processing directorate.

With that goal in mind, a "Roadkill Roundup" program, led by Space Gateway Support, began in April. Workers are encouraged to report the location of dead animals on or near the side of space center roads so that workers can remove the roadkill.

Yang Enterprises entomologist Glenn Willis said more than 100 animals have been removed so far, including raccoons, possums, armadillos, hogs, turtles, otters and even a few alligators. 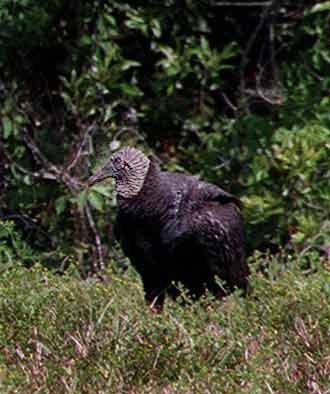 Image at Right: A vulture sits by the roadside at NASA's Kennedy Space Center in Florida, which shares a boundary with the Merritt Island National Wildlife Refuge. The refuge encompasses 92,000 acres that are a habitat for more than 331 species of birds, 31 mammals, 117 fishes, and 65 amphibians and reptiles. The marshes and open water of the refuge provide wintering areas for 23 species of migratory waterfowl, as well as a year-round home for great blue herons, great egrets, wood storks, cormorants, brown pelicans and other species of marsh and shore birds, as well as a variety of insects. Image credit: NASA

"The center, located on 160,000 acres of wildlife refuge, is a steward of this environment and there exists a unique balance between launches and preservation of the wildlife," Willis said.

Many organizations and contractors are playing a vital role in the efforts to reduce the vultures and avoid collisions with them during liftoff. Measures being taken include collecting data such as roadkill locations to determine where "wildlife crossing" signs should be installed, testing a catch-and-release enclosure, trying various sounds to startle or scare large birds away from the launch pads, and developing software for bird tracking based on camera images.

Remote cameras are placed around the launch pads to track the vultures, and a radar system is being tested to detect bird activity around the pads before liftoff.

"Camera images and radar would allow us to look before we launch. We don't want the vehicle to get damaged in any way," Payne said. "And while this program does have some 'chuckle factor' to it, we do take it seriously."