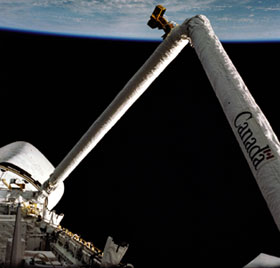 Originally, it was intended to be all brawn.

It was obvious when the space shuttle was first thought up that there would have to be some way to get the enormous equipment it was meant to carry out of its cargo bay and into space. A few different options were considered – an ejection device, for instance – but it didn’t take long to settle on the idea of a glorified crane, something that could pick the equipment up, move it over and let it go.

Image to right: On Space Shuttle mission STS-2, Nov. 1981, the Canadarm is flown in space for the first time. Image credit: NASA

In the past 25 years, however, that glorified crane has proven itself to be more like the space shuttle’s right hand – or maybe its whole right arm, capable of both heavy lifting and an incredibly delicate touch.

“It’s done a lot more than it was ever intended to do,” said Peter Chadwick, a former systems engineer with SPAR Aerospace, the company that developed it.

The remote manipulator system – named Canadarm in honor of the country that built it – flew for the first time on Nov. 13, 1981. It was only the second shuttle flight, and one of the mission’s main tasks was to test the arm out – wiggle it around a bit and see how it worked before the heavy lifting started.

The plan was to spend a few hours a day over the five-day mission doing just that, but a malfunction in one of the fuel cells threw that plan off. The mission was shortened to two days, and the Canadarm tests were canceled. They would have been rescheduled for one of the following shuttle flights if it hadn’t been for the crew’s unwillingness to let it go.

“Fortunately at that time we did not have the almost continuous communication with the ground that we have now,” Joe Engle, the mission’s commander, said. “The pilot, Dick Truly, and I told everybody at home goodnight and looked at each other and decided that, well, it’s only one night. We were young, and we thought we’d just go ahead and get as much data as we could – stay up during the night to do it.”

Engle said he doubts Mission Control was fooled for long, but no one called them on it.

“We were tired and dehydrated the next day when we were getting ready to come back in, but we did get to accomplish 90 to 95 percent of the objectives of the mission,” Engle said. “In retrospect it was so much worth it.”

Engle described the process of testing Canadarm as similar to evaluating how well your hand is able to scratch your knee. The arm has six joints – two in the shoulder, one at the elbow and three in the wrist. It’s hollow – on Earth it wouldn’t be able to support even its own weight. But in space it can lift more than 586,000 pounds. Thanks to some upgrades, the 50-foot-long arm is accurate enough to put a peg in a hole given 60/1000 of an inch in clearance.

“It was like an extension of your own arm,” Engle said. “I was just enamored with how neat it was, how much like the human arm it was. How intuitive it was to use the arm. It was my first exposure to real robotics.”

In fact, it was everybody’s first exposure to real robotics in space. 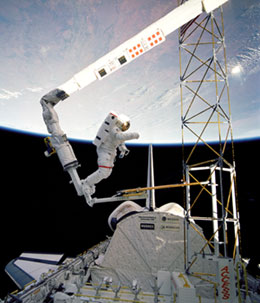 “This was the first space robotics of any size,” said Henry Kaupp, a deputy branch chief in NASA’s Automation, Robotics and Simulation Division. “It was a brand new design. No one had ever done this before.”

Image to left: The Canadarm is used for a demonstration of space station construction by spacewalker Jerry Ross on shuttle mission STS-61B. Image credit: NASA

And Chadwick said it wasn’t especially easy to do it the first time. It had to be light, and resistant to extreme heat and cold, and compact. And it had to be controlled by a joystick.

Perhaps its newness is why no one realized just how valuable Canadarm would be at first. It first became obvious that the arm could handle more than just grunt work in 1984, on the shuttle’s 12th flight. During the STS-41D mission, ice built up on a vent on the bottom of the shuttle. Because it could fall off during reentry and break something, the crew needed a way to get it off. The solution turned out to be a little tap from Canadarm.

“All of a sudden, here was a problem and we had to go see if we could work it,” Kaupp said. “And it worked. We tapped the ice and it broke off.”

Then, in 1985, the arm was again called into service to troubleshoot an unexpected problem: A satellite carried up by the shuttle got stuck in the wrong orbit when its rockets didn’t fire after it was unloaded.

“There was a lot of thought about, well, maybe the switch hadn’t been tripped,” said John Peck, a former manager of the Canadarm program. “So we came up with some tools from the crew compartment to make what we called the fly swatter. We taped it onto the end of the arm and reached out there and flipped the switch on the satellite.”

It turned out flipping the switch didn’t solve the problem, but Canadarm was used again later that year to retrieve the satellite so that it could be fixed. Canadarm went on to rescue other satellites and proved invaluable in helping astronauts repair the Hubble Space Telescope.

And more recently, it’s been called into service as a camera boom. In 2001, the Canadarm’s bigger and better sequel, Canadarm2, was added to the International Space Station. It can reach farther, carry more weight and maneuver into more positions.

In the aftermath of the Columbia accident, NASA realized it needed a way to check the shuttle for damage while in space. So they added a 50-foot extension to the arm and put a camera and an extremely sensitive laser measurement device on the end -- a system that can detect damage as small as a few hairs in width.

“A whole new world has opened up for Canadarm,” Kaupp said. “It’s become a workhorse for shuttle inspections.” 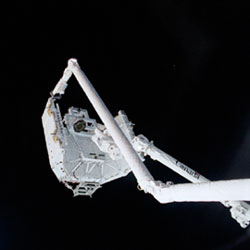 In the 25 years since Engle first gave Canadarm a try, space robotics have taken off. The shuttle's Canadarm and the station's Canadarm2 work in tandem on almost every shuttle flight now to build the station, handing school bus-sized components between them. And the future of robotics is bright.

“I’ve been over to the robotics laboratory a number of times, and I’ve seen some of the very intricate robotics that they’re able to develop,” Engle said. “They’re fascinating to me. You put on a glove and remotely move a hand that can reach out and do exactly what your hand is doing.”

Robert Ambrose, a branch chief in the Automation, Robotics and Simulation Division at NASA's Johnson Space Center, said Canadarm jumpstarted some of that development. Now, in addition to arms, NASA has developed robots on the ground with hands, fingers, legs and heads – and there’s plenty of room left to grow.