Freedom and Liberty Go to Sea 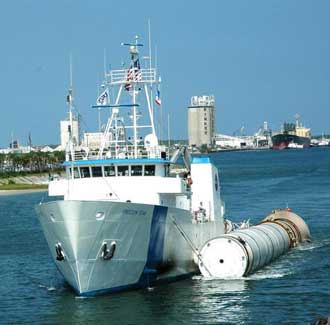 When most people think of the ships in NASA's fleet, they think of the space shuttles that pierce the sky as they carry astronauts toward space. But NASA has two seagoing ships -- the Liberty Star and Freedom Star -- that also stand ready on shuttle launch day. Their mission: heading to sea to retrieve the solid rocket boosters that power the shuttle's ascent. When the boosters are spent, they are jettisoned and fall to the sea as the shuttle's main engines finish lifting the spacecraft out of the Earth's atmosphere and into orbit.

Image at Right: The Freedom Star travels through Port Canaveral towing a spent solid rocket booster from the STS-114 launch of Discovery. The boosters are jettisoned at two minutes, seven seconds after liftoff. At six minutes and 44 seconds into the flight, the 165,000-pound boosters have slowed their descent speed to about 62 miles per hour and they splash down in a predetermined area. Image credit: NASA

While most eyes are still glued to the shuttle, the crews and divers aboard these two vessels power toward the boosters' impact zone in the Atlantic Ocean to begin their work. Capt. David S. Fraine, Master of the Freedom Star, explains that locating the boosters isn't left to guesswork. 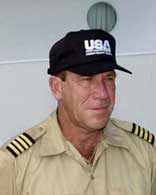 "They calculate where the boosters are going to come down based on where they're launched within the launch window," says Fraine. "We're usually about 8 to 10 miles from the splashdown point. We'll pick them up visually -- we'll pick them up on radar -- and once they've splashed into the water and we're sure everything is safe, we'll go ahead and close on them."

Image at Left: Capt. David S. Fraine has served aboard NASA's two recovery ships for the last 24 years, including as captain of the Freedom Star since 1992. Image credit: NASA

It all begins about 24 hours before a shuttle launch, when the two ships set out to sea, manned by highly trained crews of professional merchant mariners and divers. During the operation, each ship retrieves one booster. Each ship has a permanently assigned crew of 10: a captain, two mates, four seamen, two marine engineers and a cook. In addition, eight divers accompany each crew to perform the delicate retrieval operation.

First the pilot chutes and main parachutes are brought aboard. They're followed by the drogue parachute and the 5,000-pound frustum that houses the chutes at the top of the booster. With those elements secured onboard, attention turns to the booster itself, as a team of eight divers boards two small boats. 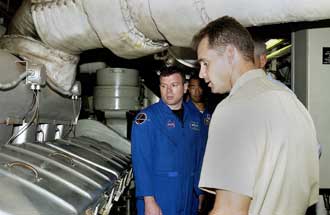 After installing a 1,500-pound apparatus called an "enhanced diver-operated plug" and air hose, the water is removed from the booster. The booster then rises in the water until it falls horizontally and floats on the surface, enabling the ship to tow it back to port behind the vessel.

Retrieving the boosters is a potentially dangerous operation and requires that the ship's crew and divers closely follow safety procedures as they work with the booster components, staying constantly aware of the ever-changing conditions around them.

Both crews and dive teams are cross-trained, with divers serving in a variety of professions between launches. "When they come back, they're not full-time divers, for the most part. We have engineers, draftsman, welders, mechanical techs and electronic techs," says Fraine. "It's a broad mix of people."

While these ships were specifically designed for booster retrieval when they were built in 1981, they've taken on added duties over the years. Beginning in 1998, they were pressed into service as "tow boats" providing the transportation for the barges that carry the shuttle's external tanks. The ships transport the tanks from the Michoud Assembly Facility in Louisiana to NASA's Kennedy Space Center on Florida's 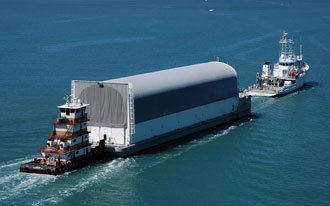 east coast, entering through Port Canaveral. This 12-day roundtrip required that the ships be retrofitted for towing the heavier barges with the tanks onboard.

Image at Left: The Pegasus barge, towed by the Freedom Star, approaches Port Canaveral carrying the external fuel tank that will launch the Space Shuttle Discovery on mission STS-121. The barge has its own crew of three -- two seamen and a mechanical technician -- who are responsible for operations and maintenance. Image credit: NASA

Their newest job is providing tracking on launch day. Both Liberty Star and Freedom Star have been equipped with new radar to track the shuttle during its ascent and gather data. For each launch, one of the two ships is positioned for tracking before proceeding to the splash-down retrieval point. In addition, these ships and their crews participate in full-scale drills to prepare them to assist in rescuing astronauts in the event of a mishap over the ocean. 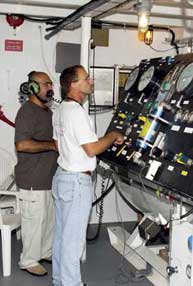 Prior to each shuttle launch, the ships crews get ready to do their part. "A couple weeks prior to the launch, we'll go out and we'll do a full mission simulation," explains Fraine. "It gives us a chance to warm up our people, check them out, get them up to speed, as well as to check out the equipment and make sure we have no surprises."

Image at Left: Crew members aboard the Freedom Star check the controls on the recompression chamber. In 2002, the ship and its dive team were instrumental in rescuing a lobster diver in distress off Cape Canaveral while on a certification exercise nearby. Hearing the call for help, the captain responded and the diver was able to use the recompression chamber aboard the Freedom Star until the ship reached Port Canaveral. Image credit: NASA

When not called upon for NASA duty, the ships have participated in other sea expeditions for the Navy and the National Oceanic and Atmospheric Administration, sometimes lasting up to two weeks.

And what is the oddest assignment the captain can recall? "One of the strangest things that our sister ship ever did," recalls Fraine, "is get chartered out in a treasure hunt for the SS Central America, the "49ers" ship that went down off the Carolinas carrying California gold miners and their treasure. It went down in a storm in the 1850s." For the record, they didn't find it. 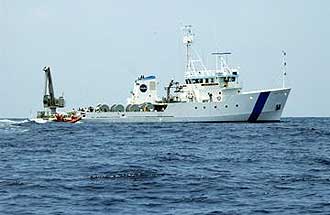 Image at Right: The Liberty Star makes its way along the Oculina Banks, a marine-protected area located 20 miles offshore of the east coast of Florida. The ship took part in a 2003 undersea expedition to characterize the condition of the deep-sea coral reefs and reef fish populations. Sponsored by the National Oceanic and Atmospheric Administration, equipment used in the study included the passive acoustic monitoring system originally developed by NASA to monitor the impact of rocket launches on wildlife refuge lagoons at the Kennedy Space Center in Florida. Image credit: NASA

But the main mission of these two ships remains their original purpose: to safely return the solid rocket boosters so they can be used to lift other space shuttles from Earth to space.