Leland Melvin is Taking His Vision Into Space 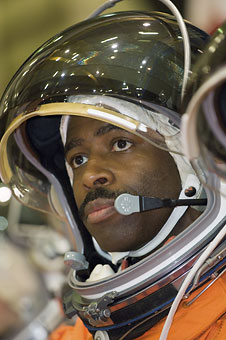 Wearing a training version of his shuttle launch and entry suit, astronaut Leland D. Melvin, STS-122 mission specialist, awaits the start of an emergency egress training session in the Space Vehicle Mockup Facility at Johnson Space Center. Credit: NASA Football coaches call it a sight adjustment. A wide receiver takes off with the snap of the ball, then alters his assigned route when he sees that the defense has changed from what was anticipated when the play was called.

The quarterback sees the same defensive switch, understands immediately what the new route is going to be and delivers the ball to an area never conceived in the huddle that started the whole operation.

The minds mesh and the ball is caught, sometimes for a touchdown.

"It's like telepathy," says Leland Melvin, once a wide receiver at the University of Richmond, then in training camps with the Detroit Lions and Dallas Cowboys.

It's also a mental skill that translates to Melvin's job as Mission Specialist I on STS-122, due to launch on December 6 at Kennedy Space Center.

He paints a scenario in which mission commander Steve Frick and Rex Walheim are working on a computer malfunction on one side of the orbiter, while Melvin and pilot Alan Poindexter are tackling a stubborn auxiliary power unit problem on the other.

"There may be times when we have to communicate just like a wide receiver and (a quarterback)," Melvin says. "It's a nonverbal thing. He can start making a motion toward a switch, and I know that's the right switch. I can just tap him or I can nod and he can look in the mirror. We have a lot of communication like that."

Even in space, he's never far from football. It's part of what got him to Richmond, where the game and chemistry lab shared an uneasy existence after he learned the joy of research from Dr. William Myers. That joy eventually earned him a job at NASA Langley Research Center when football played out.

"In football practice, I know some of his teammates wondered," says Myers of Melvin, who took off part of the Tuesday and Wednesday practices for labs. "He would come early (to the lab) and stay late. ... Coaches had to make adjustments."

Football gave Melvin a false career start in the NFL, and it's given him a certain notoriety in NASA’s astronaut corps, where there are frequent references to his having played.

In turn, Melvin credits football for helping him train for the trip he's about to take.

"I can remember with sports, there were times when my coach (at Richmond), Dal Shealy, would come into our room the night before the game and tell me to close my eyes," Melvin remembers. " 'Leland, you are in the end zone, pulling the ball in, pulling it to your body for a catch to win the game.' ... You're going through the mechanics of what you're doing, and when you visualize it and sleep on it, when you wake up the next day, you've already done it. So doing it is really second nature to you. It's in your subconscious."

The repetition, the visualization are all part of the training for Melvin's primary job, which is operating the 58-foot robotic arm on Atlantis that will deliver the 22-foot-long, 13-ton Columbus Laboratory to the International Space Station on Day 4 of the 11-day mission. The procedure will take about 2 1⁄2 hours and will include carrying German astronaut Hans Schlegel on the mission's first spacewalk. The time and distance are exact, and are calibrated in minutes and centimeters.

And so he visualizes good situations, 21 years after he visualized scoring a touchdown against William and Mary.

And he visualizes flight through space, something Shealy and everyone else who taught him football, back to his elementary school days in Lynchburg, Va., couldn't have imagined.

There will be about 300 people at Kennedy Space Center watching him go up on December 6, according to Kathy Clarke, Melvin's sister. Among them will be Shealy, Myers and a host from NASA Langley, including Bill Prosser, with whom Melvin shared an office at the center. Between work sessions, the two shared a rivalry, Prosser having been an athlete at William and Mary, Melvin at Richmond.

"I wouldn't miss it," Prosser says of the launch.

Melvin will be a bit busy, creating another visual, primarily in response to advice from those astronauts who have gone before him.

"There has to be a point during the mission that … you say I'm going to take 15 minutes and do nothing but look out the window," Melvin says. "That's something, I'm definitely going to try, a view or two."

Until then, he tries to remain calm. His time for excitement will come as the final seconds until the launch tick off. Again, football never quite leaves him:

"When we're strapped in and the countdown clock is going in the right direction and you hear this ignition and you feel this motion behind you, that's when I'll say, 'OK, game time.' "

And then he'll prepare for the first sight adjustment. Jim Hodges
The Researcher News
NASA Langley Research Center
› Back To Top