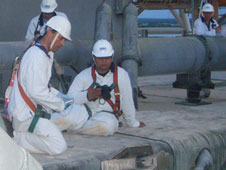 Members of the post-launch inspection team examine the hold-down posts after space shuttle Endeavour launched on the STS-127 mission. The team is made up of engineers who specialize in certain areas of the launch pad. The hold-down posts connect to the bottom of the twin solid rocket boosters. Four bolts on each booster hold the shuttle stack to the launch pad and then release it at launch. Photo credit: United Space Alliance/John Seaman 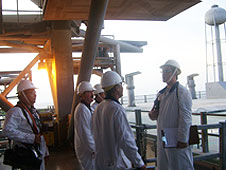 Eric Linderman, right, talks to the post-launch inspection team before they head out onto the launch platform. The team splits into two groups to complete the pad inspections after a liftoff. Photo credit: United Space Alliance/John Seaman
If you’ve ever wondered what a launch pad looks like right after the space shuttle thunders off into space, there’s a team of engineers to ask.

Called the post-launch inspection team, they head out to the launch pad to instantly appraise damage at the pad and look for debris. They look over every part of the launch complex, despite the fresh layer of exhaust residue left by the solid rocket boosters.

“You see a lot of scorched metal, some bent,” said Jeff Painter, who has seen launch pads after liftoffs for more than 20 years.

Because the elevators are not working after launch, the engineers have to take the stairs all the way up the fixed service structure.

Wildlife trekking back in only adds to the surreal atmosphere, such as the time a group of piglets was heading to the launch pad’s surface at the same time as the inspection team.

Looking over the launch pad after a shuttle liftoff used to be akin to developing a catalog of destruction. Melted speakers would wrap around poles or columns in the launch tower, drink containers tucked away and forgotten would be jarred loose and strewn about, and a few tools, such as wire brushes, would be found on the launch pad or in the blast zone.

Things have changed, though, and now far fewer things are left behind to get tossed around in the exhaust of a launching shuttle’s 7 million pounds of flame and turbulence. There’s still the occasional melted speaker, however.

Eric Linderman, who leads the post-launch team, said the group found no left-behind items at the launch pad after Endeavour climbed into orbit for the STS-127 mission. That was a first for the Space Shuttle Program. There were a few items that were blasted loose by the exhaust.

Any item found during the inspection gets evaluated to find out where it came from and why it came loose. The idea is to prevent the same thing from coming loose during a future launch. Loose items can ricochet around the pad area and potentially impact the shuttle as it climbs off the pad.

If the shuttle’s gigantic external tank is fueled but there is no launch, the team goes into “post-drainback inspection” mode. That means they head out to the pad after the liquid oxygen and liquid hydrogen have been emptied from the tank. Just like the Final Inspection Team, which studies the outside of the shuttle in the closing hours of a countdown, the post-drainback group looks for signs of ice buildup, cracks in the tank foam, or for potential debris that might have been missed earlier.

“It’s kind of awe-inspiring because it’s just the vehicle and just you,” Linderman said.

Eight engineers, all volunteers, make the trip to the pad. They generally wear shorts and T-shirts beneath the mandatory white flame-retardant coveralls. Helmets and tethers complete the outfits depending on where they are working at the pad complex.

“You might think that nighttime is a relief,” said team member Kurt Stresau. “But eight months out of the year, the mosquitoes make sure you are quickly disillusioned.”

But don’t think they don’t enjoy it.

“Not a lot of people get to do this,” Carlon said.

Richard Villanueva took part in his first inspection during the STS-127 launch, which included four tankings before it launched. That meant five chances for the team to go out and look over Endeavour.

“For me, it was just a great chance to learn,” Villanueva said. “Just the whole experience of getting to go out there, not knowing what to expect and learning from the experience of everybody else.”

Split into two teams, it takes two to three hours to complete the survey, which includes looking for signs of dented piping or loose bricks inside the flame trench.

Each of the engineers knows a specific area of the launch pad and evaluates that area closely during the inspection. When it’s finished, they can offer a conclusive report of what items broke loose, what should be replaced or moved to a different part of the pad, and what damage parts of the pad incurred, such as the hold-down posts that connect the boosters to the launch platform.

The inspections are so detailed in part because the information will go back to more than 35 organizations, directorates and companies that can’t go out and look at the launch pad firsthand with the team. The team itself is made up of engineers from NASA, United Space Alliance, Boeing and Lockheed Martin.

There are a few surprises for the group, but the most consistent shock is that launch pads survive incredibly well despite forces far stronger than most buildings face.

“You have a steel structure a half-mile from the ocean and it’s been there for 40 years and you’re setting a controlled explosion off on it,” Painter said.

For Linder, the best part of the whole inspection is getting back to the office to write the report. The group gathers around a desk and before long some of the snacks and candy that had been tucked inside desks fuels a couple hours of camaraderie.

That feeling is shared by others on the team.