Grow Text SizeShrink Text Size
What Goes Up, Must Come Down 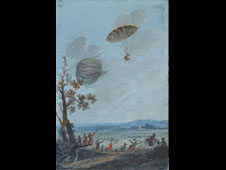 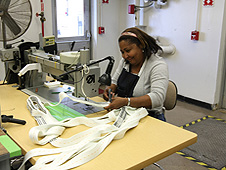 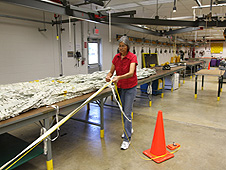 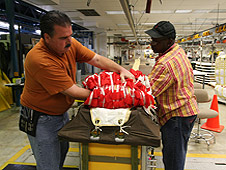 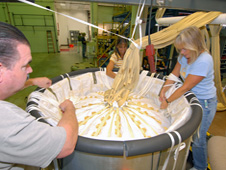 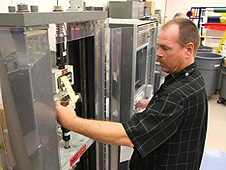 The notion of a piece of cloth helping a human float to Earth like a feather in the breeze dates back to the first known drawing of such an invention by Leonardo da Vinci in the fifteenth century. Many inventors were kept busy during the next 200 years trying to perfect a method of sailing back to earth safely.

In 1797 Andrew Garnerin performed the first recorded parachute jump. His parachute, when opened, had a canopy that resembled a huge umbrella. Garnerin also was the first parachute designer to place air vents in the canopy to reduce oscillations and uncontrollable swinging. The rest -- as they say -- is history.

Today, parachutes play a major role in NASA's space program. Without them, the safety of returning astronauts and the reusability of important equipment would be impossible.

The Ares 1 parachute recovery system consists of three types of parachutes: a small pilot chute that pulls out the drogue chute, a drogue chute that slows descent and maneuvers the booster into a vertical position, and three main parachutes that slow the booster more, carrying it to a gentle splashdown.

Hillebrandt watched as the first Ares 1 drogue chute test was performed at the Yuma Proving Grounds in Arizona. The recovery system successfully brought a 46,000-pound-plus load of equipment and sensors slowly and safely back to Earth -- a significant milestone for the Constellation Program.

"It was really a complex test," recalled Hillebrandt.

When asked how the Orion Crew Exploration Vehicle parachutes compare to the booster chutes, Hillebrandt says it's all in the weight. Boosters have three main chutes, weighing 2,000 pounds each, whereas capsule chutes only weigh 350 pounds each.

Although similar to the space shuttle's parachute system, the Ares recovery system is designed to be much larger and stronger because of the heavier weight of the first-stage rocket and because of a higher separation altitude of 189,000 feet above sea level.

To understand the colossal size of the Ares chutes, imagine a cluster of three brightly-colored canopies that cover more than two acres and is from end-to-end, 325 feet long. Kevlar makes these new parachutes stronger and lighter than their nylon predecessors. Although the chute is bigger, it still fits into the same-sized container and weighs less.

The canopy's open-spacing design, originally invented by Garnerin, is still being used. Today's canopy consists of strong strips of material sewn together in a lattice-work design, which looks similar to pie-crust top. This design allows the wind to flow through the blossoming canopy, stabilizing the entire stack.

Both the Ares parachutes and the ones for the space shuttles are processed in Kennedy's parachute facility. Hillebrandt and his team work on every aspect of the Ares parachutes in a building which covers 18,000 square feet and is bigger than two side-by-side basketball courts.

After NASA's retrieval ships, Liberty Star and Freedom Star, recover the space shuttle solid rocket booster parachutes from the water, they're transported back to the refurbishment facility at Kennedy. The chutes are stretched out on an 11,000 square-foot outdoor deck where the suspension lines are untangled.

Next, the chutes are hung by hand onto L-shaped hooks attached to a monorail system that carries them into a monster-sized washer. After hours of sloshing in a 25,000-gallon tank to cleanse the fabric of debris and minerals, the monorail moves the chute into a mammoth dryer. When the drying cycle is complete, the monorail snakes its way through the building for the next processing step -- repair and re-pack.

The strength needed for the suspension lines to support a more than 200,000 pound object from an elevation of 189,000 feet is tested by the refurbishment team on several tensile-strength machines.

Technicians also work on gigantic sewing machines to repair the fabric and 165-foot long suspension lines, while 3,500 square feet of table top accommodate the careful folding and packing of the parachutes for the next flight -- or in the case of Ares, the next test flight.

"This is a monumental feat," said McGugin about the size and scope of the work being done at the facility.

The parachute recovery system is scheduled to fly in 2009 on the first Ares 1 test flight. The two-stage rocket will be topped by a simulated Orion crew vehicle.

In the future, the Ares 1 rocket will carry the Orion capsule with four to six astronauts into orbit and deliver supplies to the International Space Station.