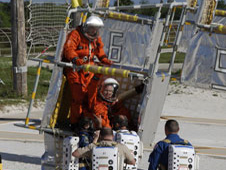 On Launch Pad 39B participants did their parts to perform a simulated emergency egress of the flight and ground crew, using the slidewire basket system. Photo credit: NASA/Kim Shiflett
› View Hi-Res Image

For three days, a group comprised of NASA and contractor workers from Kennedy Space Center and other NASA centers, along with the Department of Defense, participated in a flight crew evacuation simulation, also referred to as the Mode II/IV Simulation, at Launch Pad 39B.

According to Charlie Blackwell-Thompson, who was the NASA test director leading the exercise, the Mode II/IV is required every 18 months to certify Fire Rescue and Closeout Crew personnel. At the same time it also is an opportunity to train NASA test directors.

"This was a high-fidelity simulation that allowed us to practice and refine our emergency egress and rescue operations, Blackwell-Thompson said. “The team did a great job planning and executing during this three-day event."

During the exercise, an emergency condition during launch countdown was simulated and participants did their parts to perform an emergency egress of the flight and ground crew.

Representatives from Kennedy and Johnson Space Center served as the flight crew, dressed in launch and entry suits.

With the simulated emergency in play, Fire Rescue and Closeout Crew workers aided in the extraction and rescue of the crew. The simulation included use of the slide wire basket system where loading and unloading procedures were demonstrated. 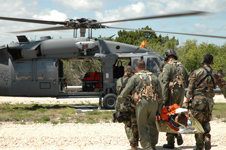 The slide wire bunker also was used by the flight and ground crews for temporary refuge while personnel were accounted for and the simulated emergency was safed.

The flight and ground crews were transported from the slide wire bunker to a triage site using M113 armored personnel carriers. Simulated injuries were treated and those with serious injuries were evacuated by helicopter to local hospitals.

Blackwell-Thompson said the three-day exercise included classroom training on the first morning and rescue technique exercises on the 195-foot level of the launch pad where astronauts enter and exit the space shuttle.

On day two, the group demonstrated and practiced rescue techniques at the slide wire termination area, including basket unloading procedures and bunker operations.

During the afternoon, the group returned to the launch pad's 195-foot level and performed rescue and egress exercises with the Firex water system flowing. 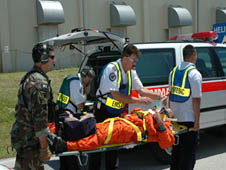 On the third day, an end-to-end simulation was completed during which the emergency egress and rescue operations were demonstrated from emergency declaration through personnel transport to area hospitals.