Students dig into a pile of LEGO bricks to begin constructing their miniaturized visions of the future of space travel. The activity tent was set up in a launch viewing area at NASA's Kennedy Space Center in Florida for the event. Photo credit: NASA/Jack Pfaller
› Larger image 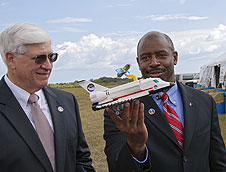 LEGO's Stephan Turnipseed and NASA's Leland Melvin hold up a NASA logo made of LEGO bricks as they mark a new, 3-year partnership between the toy brick builder and the space agency. Photo credit: NASA/Jack Pfaller
› Larger image 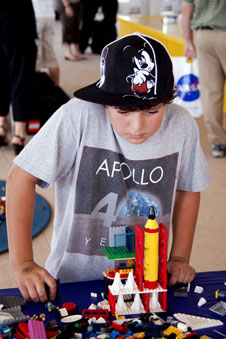 Astronauts on board the International Space Station will build small model spacecraft and working objects in orbit and share the experience with schoolchildren watching on Earth.

The students will build some of the same things in their own classrooms and see firsthand how differently objects behave in space, where there is practically no gravity, compared to the familiar world of Earth.

The project is one of the first steps in a three-year partnership between NASA and the Denmark-based The LEGO Group , maker of the ubiquitous plastic bricks that have been covering children's playroom floors for decades.

"We're going to use the classroom of space, the International Space Station, to inspire the next generation," said Leland Melvin, associate administrator for NASA Education and a former astronaut. Melvin flew two shuttle flights, spending time at the station during both missions. He joined LEGO officials Nov. 1 at NASA's Kennedy Space Center in Florida to announce the partnership.

Two small LEGO shuttles are packed inside Discovery for the STS-133 launch to promote the new partnership. They are expected to stay in their lockers, but astronauts may pull them out during the mission if they have time, said Debbie Biggs, an education specialist for International Space Station National Lab Education Projects.

NASA's fundamental goal is to use the partnership to inspire children to learn about science, technical fields, engineering and math. Known as STEM education, the focus has been a priority for the agency throughout this year's "Summer of Innovation."

"LEGO taught me a lot of things about how things are built, what makes sense in terms of structure," said Tani, who brought his daughter to the LEGO activity tent. "I don't think I'd have been as good an engineer if it had not been for things like LEGO and construction kinds of toys."

There were plenty of children who thought so, too. Visiting LEGO's activity tent at one of the launch viewing sites at Kennedy on Wednesday, kids took to 1 ton of bricks and specialized pieces with barely any instructions. They quickly constructed spacecraft of all shapes, some small with launch facilities, others large replicas of the space shuttle. Some made a run at imagining colonies on the moon or Mars.

"You can make anything you want," said Tanner, a nine-year-old who has been building LEGO sets for years.

Melvin and Turnipseed were delighted with the kids' enthusiasm. They even joined in the building.

"This is showing what happens when we give kids a challenge, give them a tool that allows them to express their response to that challenge, their ideas," Turnipseed said.

LEGO and NASA still are working on lesson plans for students that will coincide with the work the astronauts perform in space, Biggs said. Some of the plans may even have the students challenge the astronaut to see who can build something quicker.

Astronaut Cady Coleman, in training for a mission to the International Space Station later this year, is slated to be the first astronaut enlisted to build LEGO objects in space.

Space shuttle Endeavour will carry nine specialized kits to the station in February during the STS-134 mission. Working with them inside a see-through glove box so the small pieces don't get lost in the station, Coleman will assemble LEGO blocks into models and working machines.

She already is practicing with some of the kits with her son and even picking up tips from other kids.

Melvin said the LEGO partnership is crucial for NASA's education mission because the blocks invite children to think, basically, like engineers. After all, building with the toys means deciding what kind of shape to make, what combination of blocks together make that shape the best and what can the thing do when it's finished. They also come up with designs that will be stronger depending on how the bricks are aligned with each other.

LEGO also is releasing four kits to the public based on NASA spacecraft and missions. Rather than being a part of a line of science fiction or fantasy toy kits, though, the NASA sets are being marketed as part of the company's "CITY" line, which calls on kids to build things that are part of everyday life.

"We believe that space, that space exploration, the fact that we have satellites in the air, it is a part of everyday life," Turnipseed said. "The children get it, they understand the importance of what we're doing."

"Space is permeated into everything we do," Melvin said.