The Orbiter Transporter was ordered for the space shuttle operation at Vandenberg Air Force Base, but moved to NASA's Kennedy Space Center after the west coast shuttle launch complex was mothballed. Now it rolls the shuttle from the Orbiter Processing Facility hangars to the Vehicle Assembly Building. Credit: NASA
View Hi-Res Image 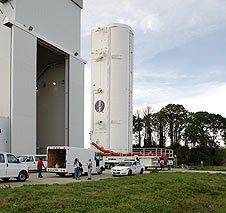 A Kamag carries the Payload Canister on the first part of its journey to the launch pad. The canister is placed vertically on the truck so its cargo can be transferred into a space shuttle ready for launch. Credit: NASA
View Hi-Res Image 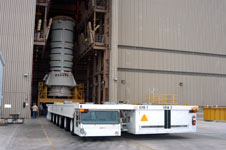 The solid rocket motor transporter is a flat-top Kamag designed to carry segments of solid rocket boosters to the Vehicle Assembly Building where they are stacked and bolted together to form a complete booster. Credit: NASA
View Hi-Res Image


NASA Kennedy Space Center drivers share the road with Fords, Chevrolets and Toyotas. But they also have to make room for Kamags and OTSes. And don't forget the crawler-transporter - a tracked vehicle its drivers compare more to sailing a ship than steering a truck.

The exotic fleet is treated like precious Ferraris and Lamborghinis. They don't get out of their garages often and every mile is carefully evaluated. And replacement parts are at least as difficult to find as they would be for the luxury brands.

"It's going through your mind that you've got a lot of responsibility" while driving the transporters, said Michael Watkins, a United Space Alliance engineer.

After all, without the specialized vehicles, NASA's space shuttles would either be stuck in their processing hangars, unable to ride solid-fueled rockets into space, or not have a payload to deploy in orbit.

It falls to the orbiter transporter to haul flight-ready shuttles from their hangars to the Vehicle Assembly Building to be connected with the solid rocket boosters and external tank.

It's a tall task for a machine that is shorter than some basketball players.

It looks like a flatbed trailer, boasts 76 wheels and relies on a 335-horsepower, 12-cylinder engine to power its short trips moving the 110-ton orbiters. With an orbiter on its back, it is, at 5 mph, slower than the average walker. Even unloaded, it can be bested by most bicycle riders.

The transporter was designed to move space shuttles around the launch complex at Vandenberg Air Force Base in California. Rather than tow a shuttle on its extended landing gear for about 15 miles, NASA asked for the special truck to save the wear-and-tear on the shuttle. The orbiter transporter was brought to Kennedy when Vandenberg's shuttle launch facility was mothballed.

Using the transporter saves technicians time in the Vehicle Assembly Building since the landing gear doesn't have to be folded up.

NASA was able to call on a few somewhat common trucks for a couple of its transport duties. Kamag, a German company that builds specialized trucks, provided two of the vehicles that Kennedy personnel use to move segments of the shuttle's solid-fueled boosters and to take the payload canister to the launch pad or Orbiter Processing Facility.

Like the orbiter transporter, the Kamags have row upon row of tires down each side that give it a bit of a centipede look. The trucks can kneel down on their hydraulic suspension to drive under booster segment pallets.

The driver's seat is in a cab under the left front corner of the vehicle. With obvious blind spots to overcome, Watkins said drivers learn quickly to count on the team of spotters that accompanies every move.

"The first time (driving it) is a little nerve-wracking because of the size and inexperience," he said.

The Kamags are the speedsters of the group. The speedometer tops out at 16 mph. But the trucks usually only reach a third of that, Watkins said.

That's thanks in a large part to the cargo - carefully designed spacecraft pieces that leave no room for error.

The Kamag that hauls the payload canister, for example, often carries the reason for the mission. The inside of the canister is set up like the shuttles' payload bays. Workers load items such as modules for the International Space Station into the payload canister just as they would be arranged inside the orbiter. Later, usually at the launch pad, the modules are moved from the canister into the shuttles for flight without exposing them or the cargo bay to contamination or weather.

The canister is taken to the pad while standing on end to match the shuttle's cargo bay in launch position. Traveling slowly down Kennedy Parkway, the Kamag looks like it's hauling a smokestack.

If NASA ever needs to pack up its specialty fleet and move it all at once, it has a machine that could do it: the crawler-transporter. Kennedy's two crawlers are bigger than some buildings.

In fact, workers have been known to ride out a tornado warning under a crawler instead of inside a building, figuring the nine-million-pound crawler is going to hold up longer than any other structure.

"I think the most impressive thing about the crawler is the control, the finite control," Watkins explained. "You've got something that large and that heavy and you can go inside the (Vehicle Assembly Building) and park it within half an inch of your target."