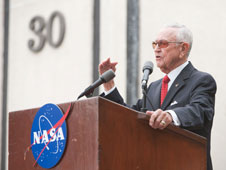 Dr. Christopher C. Kraft Jr. responds to a large crowd of admirers during a formal celebration of a naming for the facility and the unveiling of a new nameplate on the building. Photo credit: NASA
› View larger

NASA is recognizing Christopher C. Kraft Jr., America's first human space mission flight director, by naming the Mission Control Center in his honor for his service to the nation and its space programs.

Johnson Space Center Director Michael Coats made it official April 14 at a dedication ceremony and unveiling of a new nameplate on the building, designating the legendary building as the Christopher C. Kraft Jr. Mission Control Center.

“Dr. Kraft’s life stands as a testament to his dream of exploring space. A dream he realized here on Earth, in this building and at this center, through his engineering and managerial expertise,” said Coats. “He is a space pioneer without whom we’d never have heard those historic words on the surface of the moon, ‘Houston, Tranquility base here. The Eagle has landed.’ Those words effectively put Houston, and this building behind us, on the intergalactic map forever.”

Hundreds of NASA employees applauded as the nameplate was unveiled. 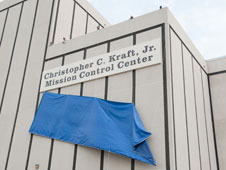 After more than 45 years of service to the nation's space program, the naming for NASA's mission control center became official with the unveiling of a new nameplate on the building, designating the legendary building as the Christopher C. Kraft, Jr., Mission Control Center. Photo credit: NASA
› View larger

“When we started the Space Task Group in 1958, I don’t think any of us appreciated what we were up to, where we were going, what it was going to result in, the impact on the country, the impact on the world,” Kraft said. “Our experiences, our joys, were something that we were all extremely proud of. We still are today. It’s great to be in this country where we can do that sort of thing. I’m pleased as I can be to have you name this building after me and not because it’s me, but because it is the flight control people and those people here at the Johnson Space Center.”

“Without Dr. Kraft’s leadership, the concept of mission control would not be what it is today,” Coats added. “The dedicated people inside this building have accomplished incredible things over the last five decades based on the foundations laid by Dr. Kraft and his early flight control development team.” 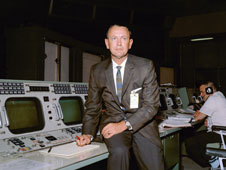 As flight director, Kraft managed all of the Mercury and several Gemini missions, and was in that role for America’s first human spaceflight, first human orbital flight, and first spacewalk. He also was one of the designers and implementers of the Mission Control Center, the heart of all NASA crewed space missions.

Kraft joined NASA's predecessor agency, the National Advisory Committee for Aeronautics, in 1945. In 1958, he joined the newly created NASA as one of the original members of the Space Task Group organized to design and manage Project Mercury. He moved from Langley Research Center in Virginia with that group to Houston in 1962, and was assigned to develop the facilities, systems and techniques necessary to support human spaceflights.

As a member of the flight operations division he was assigned the responsibility of putting together a “mission plan” for putting America’s first man into space. Instructions from his boss, Chuck Mathews were, “Chris, you come up with a basic mission plan. You know, the bottom-line stuff on how we fly a man from a launch pad into space and back again. It would be a good idea if you kept him alive.” 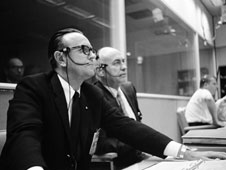 A vast set of challenges faced Kraft. He immediately recognized that during the fast-paced launch phase an astronaut could only do so much. He envisioned a team of specialists on the ground to monitor spacecraft health in real time. This involved defining/developing a first-of-a-kind operations facility, communications network, spacecraft tracking systems, telemetry, flight plans, timelines, constraints and flight rules, standard and contingency procedures as well as plans and techniques to locate and recover the astronaut and spacecraft after splashdown in the ocean. In addition, a group of engineers would need to be brought together and trained as a team to develop command and control protocols to for normal procedures as well as to immediately react to problems in real time.

Through his leadership the Mercury Control Center took shape at Cape Canaveral, Florida, and his concept of “Mission Control” was tested and developed successfully as he served as the Flight Director for seven unmanned and six manned missions during the Mercury Program.

In 1965, the Manned Spacecraft Center’s “Mission Control Center (MCC) in Houston supported its first human spaceflight during the second two-manned Gemini flight, Gemini IV. At the helm again was Kraft as he continued to “invent” the MCC operation during the Gemini Program’s first rendezvous and spacewalk.

During the Apollo program Kraft became the Director of Flight Operations responsible for the overall manned spaceflight planning, training, and execution. His leadership in this arena continued through Apollo 12 in 1969, at which time he became Deputy Director of what is now Johnson Space Center. He served as the Center Director from January of 1972 until his retirement in 1982, playing a vital role in the success of the final Apollo missions, the first manned space station, Skylab, the first international space docking during the 1975 Apollo-Soyuz Test Project, and the first Space Shuttle flights. 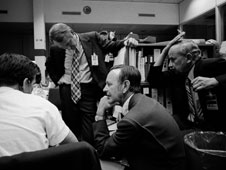 In retirement he has served as a consultant and board member of various Houston companies, as director-at-large of the Houston Chamber of Commerce, and as a member of the Board of Visitors at Virginia Polytechnic Institute and State University. His book, FLIGHT: My Life in Mission Control, was published in 2001 and was a New York Times bestseller.

Kraft has been recognized in many ways throughout his career. These include awards and honors such as four NASA Distinguished Service Medals and the Goddard Memorial Trophy. He is also the recipient of the National Space Trophy from the Rotary National Award for Space Achievement Foundation, which described him as “a driving force in the U.S. human space flight program from its beginnings to the Space Shuttle era, a man whose accomplishments have become legendary.” In 1965, his picture in the Mission Control Center appeared on the cover of “Time Magazine” in which he was profiled as the “Conductor in a Command Post.”

As Kraft’s protégé Flight Director Glynn Lunney, while providing an oral history, commented, “the Control Center today…is a reflection of Chris Kraft.” It seems quite appropriate that the JSC Building 30 Mission Control Center be named after Kraft for his innovative shaping of the initial organization and culture that to this day continues to serve this nation well during human space flight preparation and execution.