Cool Under Pressure
Drama builds as the countdown clock ticks down toward another space shuttle launch. Dressed in bright-orange protective suits and prepared for the mission, an elite group boards a van and the convoy heads to the launch pad where the shuttle awaits. But this crew isn't made up of astronauts headed for space. It's the "Ice Team." 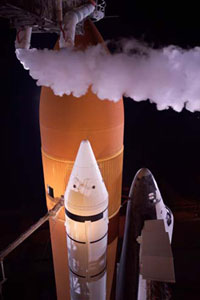 To say that members of the Ice Team -- officially called the Final Inspection Team -- need to be cool under pressure is an understatement. When your job means spending more than two hours completely inspecting a fully fueled space shuttle as it stands ready for launch, it's not your typical day at the office. Other than the closeout crew and the astronauts, this team's members are among the few who'll ever get this close to a ready-to-fly shuttle.

Team members have the crucial and potentially dangerous job of inspecting the entire space shuttle stack -- orbiter, external tank and solid rocket boosters -- to locate any unusual ice build-up, debris or damage that could endanger the vehicle and crew after liftoff.

They follow the processing of the orbiter, tank and boosters, which allows their trained eyes to spot trouble during those final, critical hours at the launch pad. If the team spots something out of the ordinary, "We can make a real-time decision," says Tom Ford, who heads the inspection team.

As team lead, Ford plays a pivotal role as he coordinates the team's work and communicates its findings to the launch director. Even before tanking begins at the launch pad, his launch day starts in briefings where the decision to begin loading the propellants is made.

At the "ice console" in Firing Room 2 at Kennedy Space Center's Launch Control Center, Ford is among those who carefully watch monitors as cameras at the pad scan the huge, orange external tank as it's filled with super-cold liquid hydrogen and liquid oxygen, searching for any abnormalities that might spell trouble. 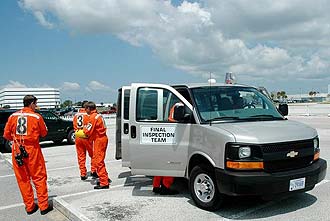 As the tanking nears completion, Ford and his team get the call to kick into high gear as they prepare for their up-close-and-personal look at the shuttle on the launch pad.

Image at Right: Team members finish loading their inspection equipment in the van where they will await word from launch control to proceed through the security blockades to the pad. Image credit: NASA
+ View Larger Image

After suiting up, they gather at their van near the cavernous Vehicle Assembly Building to receive final safety briefings, which include up-to-the minute information that would help them quickly exit the launch pad area in the event of an emergency. Each team member carries an emergency apparatus to supply 10 minutes' worth of air, and a helicopter is on call for their evacuation.

Primed for action, they wait for orders from the NASA test director to proceed to the pad. It's during a built-in hold in the countdown at the T-3 hour mark that the team gets to work. When they get the order to roll, the convoy -- which also includes the closeout crew that assists the astronauts -- is waved through the security roadblocks. 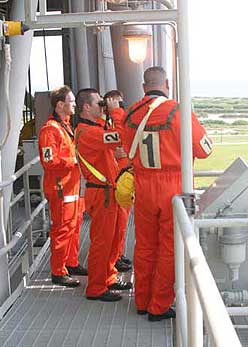 As they travel several miles to the launch pad, their eyes are treated to a sight few ever get to see. "It's really cool when we're driving up there and seeing the vehicle, with the oxygen clouds boiling off -- it's surreal," says Ford. "Especially when it's dark and all the Xenon lights are on."

As they unload their equipment at the base of the launch pad, the team members can hear the hum, creeks, bangs and other noises emitted by the vehicle towering overhead as it undergoes temperature changes. But when they board the elevator that takes them to the top of the service structure, their minds are focused on the work ahead.

They begin their inspection at the 255-foot level. Using cameras, binoculars, infrared sensing devices and other equipment, they begin to check each surface of the vehicle, looking for unusual ice build-up created by the cryogenic propellants that fuel the shuttle's three main engines. Using infrared sensing, they look for abnormal temperature readings that might indicate a problem. From this highest vantage point, they are able to check for ice in the area under the "beanie cap" -- a vent hood that covers the top of the external tank until just prior to launch and vacuums away liquid oxygen vapors. Ice build-up in that spot would be a showstopper, since it could fall and hit the orbiter while in flight. 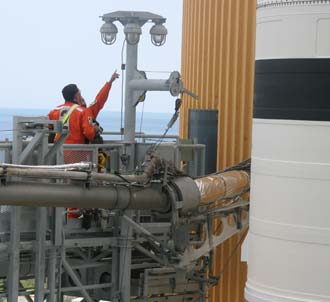 The group continues methodically working at the 215-ft., 195-ft. and 135-ft. levels, checking in with launch control at each level. The team members finish their inspection at the base of the vehicle on the mobile launch platform, moving around the solid rocket boosters' aft skirts and under the external tank and main engines.

Image at Right: With the orange external tank and the black and white solid rocket boosters at eye level, the team can spot potential problems not visible to the cameras monitored in the Launch Control Center. Image credit: NASA/Final Inspection Team
+ View Larger Image

With a final walk-around inspection of the vehicle completed and the team members in agreement on their findings, they load their van and head back to launch control, where Ford reports to the launch director. At about the same time they depart the pad, another van full of orange-suited crew members approaches. This time, it's the astronauts' turn to ride the elevator up the service structure to the "White Room" where the closeout crew will help them strap in to their seats in the orbiter. 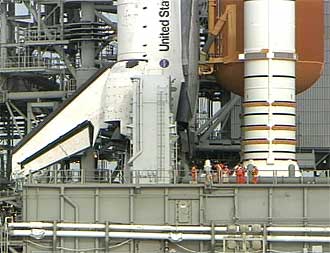 Image at Left: Dwarfed by the towering space shuttle, the orange-clad team ends its inspection on the mobile launch platform by conducting a final walk-around of the entire vehicle. The process of inspecting the spacecraft from top to bottom takes between two and three hours. Image credit: NASA

Back at launch control, Ford returns to Firing Room 2 and continues monitoring the shuttle's final checks.

Then comes the pivotal moment -- the main engines ignite, the solid rocket boosters thunder, and the shuttle roars off the pad. He eyes the monitors closely as the shuttle climbs, using an assortment of views including those from new on-board cameras that capture the separation of the boosters and tank.

He ends his 12-hour day by checking the first of many video replays, a job that he'll continue doing over the next five days. "When you launch, it feels great," says Ford.

It's all in a launch-day's work for the Ice Team.