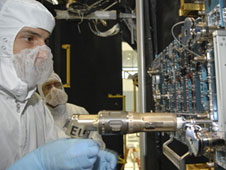 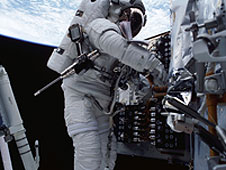 The pistol grip tool has been a standard instrument for spacewalkers for missions to the Hubble Space Telescope and construction of the International Space Station. Here, the tool, which resembles a cordless drill, is slung on an astronaut's spacesuit as he works on the telescope. Credit: NASA
›  View Hi-res Image

NASA's upcoming flight to service the agency’s Hubble Space Telescope will test more than 100 new tools developed to install and replace components, some of which designers never intended astronauts to fix on orbit.

Many of the STS-125 mission’s goals rely on devices that didn’t exist five years ago.

"Recently, due to some failures of instruments on board, we’ve had to design tools that fix things that weren’t anticipated to ever need to be fixed in space," said Justin Cassidy, the lead systems engineer for Crew Aids and Tools at NASA’s Goddard Space Flight Center in Greenbelt, Md.

For example, a power failure in 2004 crippled Hubble’s Space Telescope Imaging Spectrograph. After the failure was traced to the instrument’s power supply, Cassidy’s team set to work right away to develop a tool that would allow astronauts to replace it.

But the power supply was not designed to be easily changed by spacewalking astronauts. Cassidy compared the work astronauts would have to do to opening up a computer and replacing a board while wearing thick gloves on their hands and a fishbowl on their head.

During the development of the new device, the engineers had to account for, among other things:

• The tight quarters the astronaut would have to work in with the tool.
• The brief amount of time an astronaut has to take out each fastener to release the board.
• Temperature swings of 500 degrees from the heat of direct sunlight to frigid shade. Either extreme can make the metal innards of a power tool seize up instantly.
• What would happen to each of the 111 fasteners in weightlessness.
• How much the tools weigh.
• Whether the tools can withstand the vibrations of launch.

Nothing in the astronaut’s regular tool kit could remove so many fasteners in a short time, Cassidy said. The pistol-grip tool, which is NASA’s version of a cordless drill, turns about 15 times a minute on the high side. It’s a staple for space construction, but could not do the job fast enough on the Hubble servicing flight. Engineers wanted at least 10 times that speed, but didn’t need the torque the pistol-grip tool generated.

They also needed something to corral all the fasteners as they came loose. Otherwise, they might float into something critical inside the telescope and cause a problem.

With the mini power tool devised, engineers also began adapting it to the second Hubble instrument that recently failed, the Advanced Camera for Surveys, or ACS. The instrument’s cover, just like that of the spectrograph, was not intended to be repaired by astronauts. Although it has only 32 fasteners, the electronics box is tucked in a corner, Cassidy said. That limits the mobility a bulky spacewalker will have.

"The repair was so much similar to (the spectrograph) that we were able to adapt them or convert them over to a design that would work with ACS," Cassidy said. "So we’re not using the same tool, but we’re using the same design philosophy that we invested so much time in years beforehand and be able to apply that onto this ACS repair."

The timeframe may sound long, but it includes a succession of careful steps from sketches to detailed drawings, to rough prototypes before something is ready for even a rudimentary tryout. By the time a new tool is tucked inside a shuttle, the astronauts who will use it have tried training versions inside the Neutral Buoyancy Laboratory at NASA’s Johnson Space Center in Houston, and made suggestions of their own.

Engineers like Cassidy typically follow the astronauts into the pool, which simulates weightlessness in space, to see how the tryout progresses.

The tools also get workouts in Goddard’s own clean room.

Every tool has its surprises during development, Cassidy explained.

"There was a tool I thought would work a certain way and when I actually had the tool in my hand and started using it, it didn’t work the way I thought it would. Or the combination of tools were not the ones I originally had selected," Cassidy said.

The toolmakers work primarily with aluminum, but take pains to hollow out sections where they can to save weight. Also, the designs typically do not press for extremely tight tolerances, because that would lengthen the time it takes to manufacture a new device.

With the changes made and tools proven, the tools have been packed into several different areas of space shuttle Atlantis and its equipment carriers for the ride into space. If they work as planned, then Hubble will be able to continue its groundbreaking observations of the universe for years to come.