Monitoring Hail at the Pad
Between the late-February hailstorm that forced Space Shuttle Atlantis (STS-117) to roll back from Launch Pad 39A to the Vehicle Assembly Building, to July's torrential rainstorms that brought the potential for more hail, Kennedy Space Center engineers have been relying on a new hail detection system more than ever.

The shuttles have been struck five times while at the pad undergoing preparation for launch. 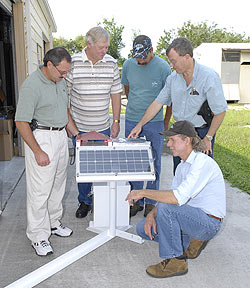 NASA and Arctic Slope Regional Corporation's aerospace engineers have developed a special hail monitor, called the size distribution impact transducer, to better detect and assess hailstorms that could damage a space shuttle or its fuel tank while standing on a launch pad.

The new hail monitoring system was first used at Launch Pad 39B for the STS-115 mission in 2006.

"Armed with this hail impact data, a more informed judgment can now be made as to the size, depth and number of damaged sites to expect, and the possible type of repair that may be required," said Charles Stevenson, a NASA engineer overseeing the project.

"When fully deployed, the hail monitor will transmit data back to the Launch Control Center. This is another great example of NASA ingenuity."

The original hail detection system used sheets of aluminum foil stretched over Styrofoam, a system developed by Colorado State University. The foil revealed when hail struck an area by showing large indentations on the surface.

The need for an advanced system became apparent after hail struck Space Shuttle Discovery in May 1999 while awaiting launch for STS-96. The hail monitors have not replaced manual inspections after a storm, but rather supplement visual inspections. Engineers retrieve information from the monitors at the launch pad. 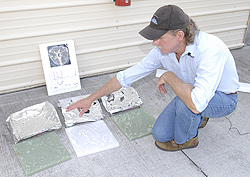 According to ASRC Aerospace engineer John Lane, the sound of rain deflecting off a vehicle is distinctly different than the sound produced by falling hail. The sound of hail is not only louder, it contains higher frequencies due to its hardness.

"The hail monitor sensor is a metal plate in the shape of a shallow pyramid which deflects hail from the sensor surface after one hit, thus preventing multiple bounces from the same hail stone," Lane said.

A microphone pickup is mounted beneath and in the center of the metal plate. The output of this microphone is connected to an electronic circuit which digitizes and processes the microphone signal.

By placing three hail monitoring systems close to the launch pad, any hail striking the shuttle or the launch pad structures can be detected by the monitors and recorded by the liquid-crystal display counters. The ground operations crew checks the counters daily when a vehicle is on the pad.

Lane said by performing special data processing, the hail data, coupled with velocity data, can be merged into a four-dimensional picture (showing space and time) of hail size distributions. Specific impact areas can then be pointed out for inspection crews immediately following a hail storm.