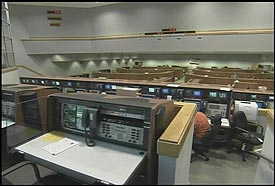 When Space Shuttle Discovery lifts off on its mission from Kennedy Space Center in Florida, the best view of the flight might be from the new Firing Room 4. Through its huge two-story windows, engineers will watch the vehicle thunder into space as they debut NASA's most advanced control room ever.

A firing room is what most people think of as "mission control" for launch. "The firing rooms serve as the nerve center for the launch and orbiter processing," said NASA Test Director Ted Mosteller.

A building at Kennedy called the Launch Control Center houses each of the four rooms. On launch day, a firing room is packed with upwards of 216 engineers at computer consoles, checking a space shuttle's systems to make sure everything is ready for launch. It's within the room's walls that the test director polls the team for the famous "go/no go" for launch. When not being used for launch, firing rooms also monitor the health of orbiters Discovery, Endeavour and Atlantis while they're inside their hangars being prepared for upcoming missions.

The opening of Firing Room 4 concludes two years of renovation that dramatically reinvented the space. "Originally, this area was a little bit of office space, a conference room and a small firing room," said Mosteller. 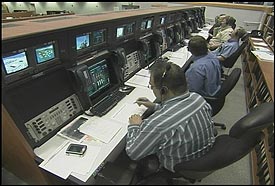 The first space shuttle firing rooms were constructed in the 1970s and carved out of the existing infrastructure left over from the Apollo moon missions. While up to the task of launching shuttles, the rooms were notoriously noisy, crowded and frigidly cold. The renovation of Firing Room 4 gave designers an opportunity to blast away from the past and build the ideal space shuttle launch control room.

Image to left: Firing Room 4's consoles are equipped with the computer and communications systems launch managers use to monitor and launch space shuttles. Credit: NASA

The first thing NASA did to develop the room was get the input of the engineers who will use it. After compiling a wish list of features, NASA tested how well they would work. Rick Dawson, systems integration manager for the project, worked with a team that tried models of the room's new computer consoles on for size before moving ahead with manufacturing them. "We flew up to Calgary and set up a couple of the consoles and checked them out," said Dawson. "It saved us months of work."

The end result of NASA's careful planning is a comfortably cool, quiet and well-organized room specifically suited for space shuttle launches. Firing Room 4 looks like the sort of tidy, high-tech auditorium a capitol building or corporate headquarters might have. A new fire extinguishing system and a modern communication network are neatly tucked behind beige walls decorated by simple digital countdown clocks. And what of the computer consoles Dawson mentioned? They're just what the engineers hoped for; spaciously arranged on the floor, the consoles offer plenty of area to work and, most importantly, think.

Given that Firing Room 4 was designed for and by launch engineers, the ultimate question is how do they like their new workspace? "They love it," finalized Mosteller. "The first thing they say is they don't have to bring a jacket."