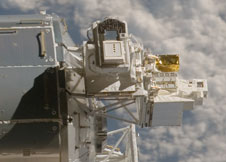 The European Technology Exposure Facility, known as EuTEF, was bolted to the outside of the Columbus module on the International Space Station during STS-122 in early 2008. The robust EuTEF was equipped with power connections and other fittings that allowed experiments to work properly without attention from astronauts. Photo credit: NASA
›  Hi-res Image

Astronauts John "Danny" Olivas, left, and Nicole Stott remove the EuTEF science platform from the outside of the Columbus laboratory on the International Space Station during the first spacewalk of the STS-128 mission. The astronauts moved EuTEF into space shuttle Discovery's cargo bay so the experiments could be returned to Earth for evaluation. Photo credit: NASA
›  Hi-res Image

Fabio Tominetti, left, and Marco Grilli helped design and build the EuTEF as a poweful platform for experiments that are exposed to the vacuum and other rigors of space. Photo credit: NASA
When Fabio Tominetti and Marco Grilli last saw the EuTEF research platform in early 2008, it was carefully packed inside the payload bay of space shuttle Atlantis. It had been built and handled with the utmost care, and its white and thermal insulation and golden reflective sheets and experiments were pristine.

EuTEF didn’t look much different as it hung upside down in a work stand a few days after coming back to Earth aboard Discovery following about a year and a half attached to the orbiting International Space Station.

"It’s almost brand new," said Tominetti, the EuTEF program manager for the Milan-based Carlo Gavazzi Space. "It could probably fly again tomorrow. I expected to see something to tell you that it had been exposed to 18 months in space."

EuTEF is short for European Technology Exposure Facility, a remote-controlled base complete with power and communications networks built to host nine experiments from Europe’s scientific community, including prestigious universities and foundations. The research largely focused on the effects of space on materials, including window materials that could be used on future spacecraft.

Tominetti and Grilli, a systems engineer with Carlo Gavazzi, recently traveled to NASA's Kennedy Space Center in Florida to pack the research platform and its experiments for their return to Europe.

The EuTEF went into space with the European Space Agency’s Columbus laboratory module as part of the STS-122 mission in February 2008. After Columbus was connected to the space station, spacewalking astronauts attached EuTEF to one of its platforms on the outside.

From there, the experiments would be exposed to the harshness of a constant vacuum, a round-the-clock dose of radiation, and heat and cold extremes that vary 200 degrees during each 90-minute orbit of the planet.

Despite the conditions, EuTEF returned exciting early results, Tominetti said. For example, a study of atomic oxygen around the space station revealed that two computer models of the chemical’s distribution were not as accurate as they should be, but a third model was correct. Knowing where corrosive atomic oxygen molecules are and how they behave in orbit helps future spacecraft designers.

Although EuTEF delivered some results while still in space, researchers will get the chance to look at the materials samples and other experiment results firsthand once EuTEF is taken back to Europe and shipped to their sponsors.

"There are a lot of small samples to see the exposure to atomic oxygen and to radiation, so they will be quite busy analyzing the chemical reactions of the samples," Tominetti said.

The mission also proved that the design for the research facility was sound.

"Starting with nothing in your hands but some scrap paper and then building it up was the first big achievement," Tominetti said.

"What was a little bit scary to me was the amount of paperwork you have to do before you have the real hardware working, to be tested, designed and flown," Grilli said.

The team had worked for years to design and build the research station, including extensive discussions and review sessions with agencies such as ESA and NASA, plus many conversations about the experiments that designers planned for orbit.

That doesn’t mean there weren’t a couple glitches along the way, though.

"We fixed a couple problems by remote," Grilli said.

High radiation in orbit is suspected of causing trouble for the electronics on EuTEF, but the issue was quickly fixed with a simple reboot, Tominetti said.

Another glitch developed because of the success of an experiment studying static electricity on the station. The device on EuTEF designed to discharge static electricity from the station did what it was supposed to, but that caused some concern when controllers on Earth saw an electric discharge around the station. Once the experiment was tracked down as the cause -- and then proven to be working correctly – the research was turned back on.

Tominetti and Grilli watched over the experiments package from the European Space Agency’s Erasmus Command and Control Center in the Netherlands.

"Having switched it on was great," Tominetti said. "We see it alive, like a little mechanical baby. So we followed this growth for one year and half, but it was sad to arrive at the end, even though it was a successful mission."

As Discovery headed into space in August to equip the station and recover EuTEF, the Earth-bound controllers switched off the experiments and set up the platform so astronauts could safely detach it from the Columbus lab and bring it back aboard the shuttle without damaging the valuable results.

The return trip called for a whole new set of procedures for the spacewalkers because the platform Discovery carried to retrieve the experiment set was different from the kind EuTEF was bolted to when it rode into space.

"It was like designing a whole new mission," Grilli explained.

The return capped seven years of work on the project by the two engineers – work they would happily repeat if called on for another EuTEF mission.

"It was very exciting, but also a little bit sad, because the mission being over, the story ends," Tominetti said.