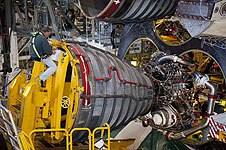 An engineer on a headset helps guide a space shuttle main engine into space shuttle Atlantis. The decision to have someone on top of the engine installer came about by accident during the first engine installation on Columbia 30 years ago. Photo credit: NASA/Kim Shiflett
› Larger image 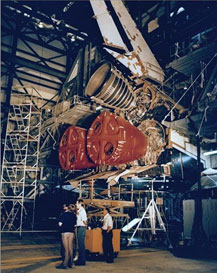 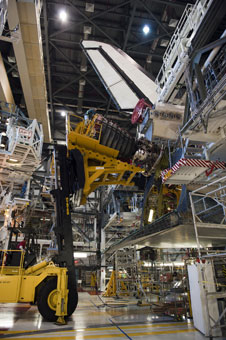 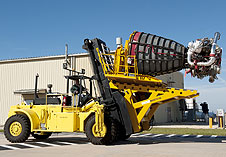 The "Hyster" forklift with the angled engine installer and a main engine ready to be placed inside Atlantis. Photo credit: NASA/Kim Shiflett
› Larger image

The first time anyone installed a main engine in a space shuttle in 1980, it took three days and prompted a series of changes that quickly became standard practice.

"The first one, it was, 'There's the orbiter, go put a motor in it,'" recalled Robert "Bob" Rysdyk, a lead engine technician for Pratt & Whitney Rocketdyne who helped install that first engine.

There were laser instruments galore marking off all sorts of measurements as technicians tried to set the first engine carefully inside shuttle Columbia's aft compartment.

"He actually went down to the janitor's closet and cut two broomsticks the same length and used those to align the pump to the orbiter," Rysdyk said.

Thirty years and more than 130 missions later, Rysdyk was part of the team that installed what’s expected to be the last set of main engines in a shuttle, this time in Atlantis. It took less than four hours and the team used the same measurements that Austin came up with when he cut the broom handles.

Two years before that first installation, Rysdyk said he had no space program ambitions.

"I was working on four-cylinder airplane engines that would fit on a desk," Rysdyk said. "I got recruited from my next door neighbor who was an engineer out here in '79. Literally, my application was a sheet of notebook paper with my name and what I did on it. I got a job interview and hired within a week."

Michael Kerasotis, a quality inspector with Pratt & Whitney Rocketdyne, came to Kennedy in 1979 as part of a summer program. He started working on the shuttle's tiles but migrated to engine work within a couple years of Columbia's first launch.

"This has been the longest summer ever," Kerasotis joked. "We got a pass to come out here and see (the shuttle). I never thought I'd be working on it."

One of the most carefully choreographed aspects of preparing a shuttle for launch involves placing three 7,700 pound main engines into the back of the spacecraft.

It takes eight people and a lot of patience.

The machinery involved starts with a cone-shaped fitting specially made to handle a main engine. Because the engines face slightly up toward the rudder, they have to be installed at an angle. So the fitting is welded to a sliding rack. The rack and fitting are, in turn, positioned on the front of a huge forklift known as the "Hyster" for the engine installation.

The engine installer, forklift and the technicians who oversee an installation preach careful control anytime an engine is on the move.

The installer has seen very few changes since it was brought to Kennedy in the late 70s, Rysdyk said.

"Every other piece of ground support equipment has gone through a lot of changes," he said. "That thing right there is almost exactly like it was in 1978."

The machinery also got a lot more use than designers thought it would, although it has held up just fine. That's because the shuttle's main engines originally were not expected to be removed after each flight. Instead, the main engines are taken out soon after a shuttle returns so their components can be inspected closely and without the engines in the way, processing for the Orbiter is safer and quicker. The main engines for the initial five missions were inspected in-place without removal from Columbia.

"We literally in the first few operational flights after that, used up the whole design life of the engine installer," Rysdyk said.

More than equipment changed, too. One of the most common sights during an installation process is an engineer sitting on top of the engine installer in a posture reminiscent of "Dr. Strangelove."

"That came about by accident," Rysdyk said.

Basically, the engineer leading the first engine installation ran out of room to stand, so he hopped up on the installer to get out of the way. Although some folks didn't want anyone on top of the installer for fear of falling, the advantages became apparent instantly.

"Suddenly, he sees he can see a lot better up there," Rysdyk said. "He can run the job better."

Both Rysdyk and Kerasotis said the stress of handling the machinery regularly on tight schedules and in changing situations gives the engine teams a strong sense of camaraderie.

Some of the launches during the early part of the Space Shuttle Program were scrubbed a few seconds before liftoff, after the main engines had ignited but were shut down for a problem. Called a "pad abort," the situation meant a mandatory engine change at the launch pad, with the shuttle in its launch position.

"If you have a pad abort, you're life comes to a stop except for that engine," Rysdyk said. "There were nights when you'd come in at midnight and come out at noon. There was nothing but, 'Get it done.'"

While the vast majority of installations have been completed in the confines of an orbiter processing facility, replacing an engine at the launch pad requires just as much precision, but in an environment that is hardly hospitable, especially in the winter.

"That flame trench works both ways," Kerasotis said, explaining that just as the flame trench funnels fire and exhaust away from the shuttle at launch, it collects frigid air from the north in the winter and shoots it up into the bottom of the shuttle stack.

The workers endure the harsh environment because the engines are not just important, they are incredibly complex machines that are at once more than 99 percent efficient and unforgiving. In other words, the technicians know they are one of the last to touch the engines to ensure mission success and no flaws in installation.

"It's never normal, but you get used to it," Rysdyk said.