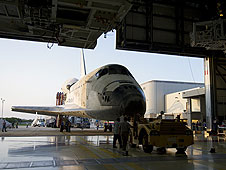 Space shuttle Discovery is towed into Orbiter Processing Facility-2 at NASA's Kennedy Space Center in Florida after landing to complete the STS-133 mission. Protected in the hangar, Discovery will be inspected and then "safed" for display at a museum. Photo credit: NASA/Jack Pfaller
› Larger image 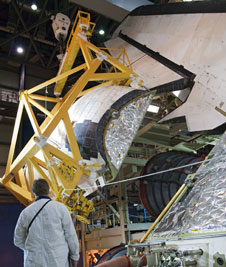 Technicians install an orbital maneuvering system pod on Discovery's aft in preparation for the STS-133 mission. The pods on either side of the shuttle's rudder will be removed and sent to New Mexico for safing as the shuttles are readied for public display. Photo credit: NASA/Ben Smegelsky
› Larger image 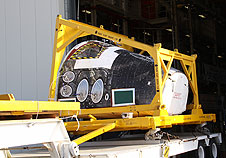 The forward reaction control system pod as it looks separate from a shuttle. The pod, which fits in the nose section of an orbiter, holds tanks of hypergolic fuel and oxidizer. In space, the RCS helps control the shuttle's attitude and speed. Photo credit: NASA/Troy Cryder
› Larger image

Discovery touched down Wednesday, March 9, just before noon to complete the 13-day STS-133 mission to the International Space Station. The shuttle and its crew of six astronauts delivered the last pressurized module to the U.S. side of the orbiting outpost, a large closet of sorts called the Permanent Multipurpose Module.

Standing on the runway at Kennedy, STS-133 Commander Steve Lindsey described bittersweet feelings of bringing home NASA's most veteran orbiter for its 39th and final time.

"As the minutes pass, I'm actually getting sadder and sadder about this being the last flight and I know all the folks involved with the shuttle program feel the same way," Lindsey said.

A few hours after landing at Kennedy's Shuttle Landing Facility, Discovery was back inside an orbiter processing facility going through standard post-landing procedures.

As the standard work is completed, Transition and Retirement Flow Director Stephanie Stilson said technicians will make a series of inspections to find out whether there are any lurking issues that could pose concerns to shuttles Endeavour and Atlantis as they make their own final flights.

"We'll see if there's any problem anomalies that we have to go say, 'Hey, you guys may want to go look at this as well,'" Stilson said. "We'll go through basically our standard testing and checkout initially, right after landing, so that's business as usual."

There are no signs of hidden dangers, and indeed astronauts and technicians often note that the shuttle looks pristine, as though it had not even gone into space before. Nevertheless, the retirement gives technicians and engineers a chance to delve deep into the spaceframe to areas that have not been seen recently.

"There's some hydraulics systems, some other things that we really haven't had a chance to look at because it was really too invasive to get in there and look at so we're going to request that the teams pull some of those components out and do some forensics," said Bill Gerstenmaier, associate administrator of Space Operations.

The inspections will not be unique to Discovery. Atlantis and Endeavour also will be examined closely for similar conditions. By the time all three orbiters are inspected, NASA is expected to have a detailed encyclopedia to pass on to future spacecraft designers.

The space shuttle main engines, considered by some to be the most advanced rocket design ever, also will get a heavy dose of attention during the transition phase, according to Mike Moses, the shuttle's launch integration manager.

In fact, although the three shuttles will go to museums, they will not take their engines with them. Instead, they will sport dummy engine nozzles that will look exactly like the real thing. NASA is going to keep the real engines in its inventory, potentially using them on a future rocket or as a head start to design the next engines.

"From the outside, it'll look like real engines, but the inner workings, the turbopumps and all those high-tech things that make engines so special, they won't be part of the display," Stilson said. The exclusion won't be noticeable to visitors, though, because the powerhead of a main engine is hidden inside the aft compartment anyway.

The OMS pods and the forward reaction control system will be detached from the shuttles at Kennedy and shipped to White Sands, New Mexico, for disassembly. The OMS engines use hypergolic propellants, so any part or seal that could release harmful elements in the future will be removed there.

The 6,000-pound thrust engines in the OMS pods will be removed from the pods and replaced with replicas before they are reattached to the shuttle for public display.

Other than those things, though, NASA intends to have the rest of the shuttle look just as it did the last time it went into orbit.

"For the most part, they will remain intact," Stilson said. "We want to keep them looking as flight-like as possible."