The twin crawler transporters, built at NASA's Kennedy Space Center in Florida for the Apollo program, are still making tracks today. Originally designed to carry the towering Saturn V moon rocket from the Vehicle Assembly Building to the seaside launch site, the enormous transporters now carry the space shuttles to the launch pads for liftoff. 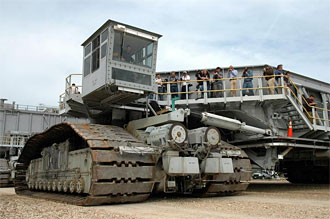 Image to right: During a 40th anniversary celebration at Kennedy Space Center, media get a rare opportunity to ride on and photograph one of the crawler transporters up close. Image credit: NASA/KSC

"The reason we've been that successful isn't because we've got a 50-year, 5,000-mile warranty" on the crawlers, NASA shuttle processing director Mike Wetmore told an enthusiastic crowd during a Jan. 13 anniversary celebration. "It's because of the efforts of the guys behind me who've kept these machines running."

Current and former employees joined the grown children of two of the main designers of the machines for a ceremony in front of a 5.5-million-pound crawler. After cutting into a cake decorated with a photo of the transporter, the group joined about 40 media on a tour of the giant contraption as it crept along at a speed of about one mile an hour, crushing rocks to dust in its wake. 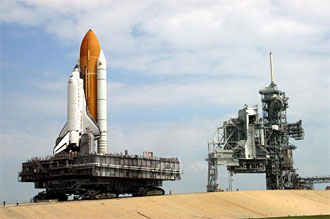 In January 1966, the crawler completed its first successful move by hauling a 10.6-million-pound launch umbilical tower three-quarters of a mile.

Image to left: Space shuttle Discovery makes its way up the 5 percent grade to the hardstand of Launch Pad 39B in preparation for STS-114, the return-to-flight mission. Image credit: NASA/KSC

At first glance, the crawler's imposing size eclipses its high-tech capabilities. It's strong enough to lift space shuttles and moon rockets, precise enough to place them within a fraction of an inch of their destination, and delicate enough to keep its surface level so its towering cargo stays perfectly vertical throughout the roughly six-hour ride.

The crawler transporters are 131 feet long and 113 feet wide, with a flat upper deck measuring 90 feet square -- about the size of a baseball diamond -- that serves as the carrying surface. They move on four double-tracked tread belts, similar to those on a military tank. Each contains 57 "shoes" weighing more than a ton apiece. 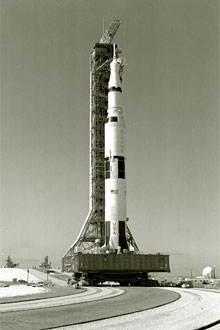 Each transporter is powered by two 2,750-horsepower diesel engines. The hydraulic system includes 16 jacking, equalizing and leveling cylinders, which keep the crawler's surface level at all times. This leveling system keeps the shuttle from deviating, only allowing the top of the orbiter to move in an arc about the diameter of a basketball during its journey -- even as the crawler climbs the short hill to the launch pad.

"It's good that people recognize a piece of technology that has endured through two programs -- I guess really three, if you include Skylab," said crawler systems engineer Bob Myers.

During their four decades of service, these workhorses have transported seven different types of launch vehicles, including the gigantic Saturn V and all five space shuttles. Every Apollo moon mission began with a crawler ride to the launch pad, as has every shuttle mission.

Image to right: The crawler transporter carries the Apollo 11 Saturn V space vehicle from the Vehicle Assembly Building's High Bay #1 to Launch Complex 39A in May 1969. Image credit: NASA/KSC

Given their successful track record, the crawlers may not be ready for retirement anytime soon.

"It took a lot of people to keep it rolling for 40 years, and I'm just glad it's still here to go," Myers said. "I hope it goes for another 40 years."

Wetmore confirmed he shares the same wish: "We're hoping that in the future it'll also be carrying a crew launch vehicle and a cargo launch vehicle to support our return to the moon and on to Mars."

For further information on the design of the crawler transporter, please visit:
+ Creating NASA's Gentle Giants