Grow Text SizeShrink Text Size
Creating NASA's Gentle Giants
Philip Koehring spent his life working for companies that built giants. They weren't the kind that gave small children nightmares, but giants that could move mountains and inspire awe by their sheer size and power. These behemoths mined coal and possessed the kind of Herculean power NASA would need to move the massive rockets that would first carry men to the moon. So in the early 1960s, much of the burden of adapting the engineering know-how fell on Koehring's shoulders. 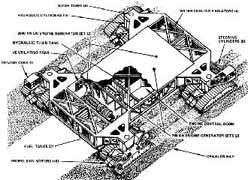 The plan was to take the engineering technology that moved the mighty power shovels and apply it to the new needs of the Space Age. Marion Power Shovel Company of Marion, Ohio, won the contract to create the "crawler" that would transport the moon-bound Apollo Saturn V rockets from the Vehicle Assembly Building at Kennedy Space Center in Florida to their seaside launch pad just a few miles away. Moving the rockets would take both strength and finesse.

Although Koehring passed away in 1994, his three sons -- Phil, John and Doug -- now share renewed nostalgia for their father's lasting contribution to America's space program as the crawler turns 40 years old.

"I first remember seeing a model that they had built of one corner of the crawler that was machined out of aluminum and crawling along the floor with a little wired remote control to it," says Phil. "Our father started on the crawler back in the bid stage, when he was working for Bucyrus-Erie at their research and development department in Milwaukee."

When Marion won the contract, Koehring was recruited from rival Bucyrus-Erie, so he and his family packed up and moved to Ohio. These two companies were at the top of the industry, and as the Marion project manager for the crawler project, Koehring would oversee the building of a machine never before seen or imagined. 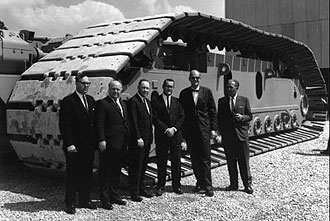 Koehring's son John recalls an early test that took place at the Ohio plant. "I remember going to Marion Power Shovel and seeing the track plugged into basically a big extension cord and moving back and forth."

This sturdy technology was deeply rooted in the coal mining areas of our country, but adapting it to Space-Age needs brought many challenges. As with any major undertaking that is the first of its kind, the project hit a few snags along the way. 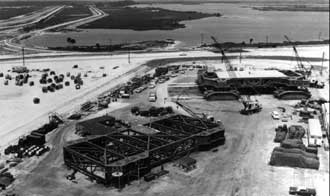 "He was always very proud of his involvement in the crawler, but he did have his frustrating moments," says Phil. A labor dispute that delayed the program "affected him quite a bit."

Image at Right: The two crawlers are seen under construction at Kennedy in April 1965. Image credit: NASA

The hydraulic system for steering and leveling the crawler called for precision. Along the way, analysis required design changes that incorporated improvements like a separate power system for load-leveling, jacking, steering and ventilating.

And then came the bearing problem.

During a July 1965 test at Kennedy, pieces of bronze and steel were found on the crawlerway surfaces as they were being evaluated. It was determined the crawler's support bearings -- about the size of frozen orange juice cans -- could not handle the loads exerted during turns.

Phil recalls his father's return from that trip to Florida. "I remember him coming back late one night from a trip carrying a small, canvas bag of bearing bits. I remember actually holding some of those in my hand. Not his happiest time."

Image at Left: The first crawler was ready for service by January 1966. Image credit: NASA

Building a new machine to carry a huge new vehicle tested everyone involved. And while the bearing problem was being solved, the Apollo preparations at Kennedy, just like the crawler, ground to a halt. While Koehring directed the redesign at Marion, Donald Buchanan shouldered the responsibility at Kennedy. Their parallel efforts resulted in modifications to the crawler's steering hydraulic system. With newly designed sleeve bearings replacing the failed roller bearings, the program got back on track. 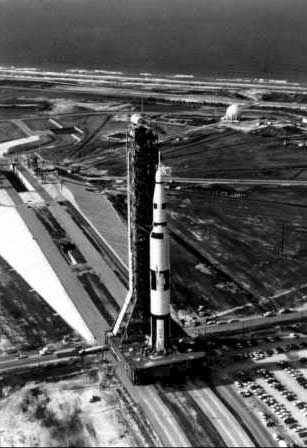 Problems were replaced with pride as the two crawlers built by Marion went into service and carried each Apollo rocket to the pad.

Image at Right: Carrying a dummy vehicle, a crawler starts up the incline to the launch pad during a facilities test on May 25, 1966. Image credit: NASA

Koehring's son Doug recalls that he and his brothers had an even keener interest than most children in their country's race to the moon. "Numerous times, we'd be late to school to watch the launches."

Throughout his life, Koehring continued to be an avid space enthusiast and was extremely proud of the contribution he made. "If you go into our father's den in Pennsylvania -- which is still pretty much as he left it -- the walls are covered with space memorabilia," says Phil.

Today, it's hard to imagine those involved in building the crawler could have envisioned their monstrous machines carrying massive space vehicles to the launch pads well into the 21st century. Yet 40 years later, every space shuttle makes the last Earth-bound leg of its journey to space aboard one of the twin crawlers.

"That's what I find amazing about it. This was a machine that was built to last," reflects Phil. "There were a lot of naysayers about this program in the early days, and all I can say is, 'We’ve shown them!' " 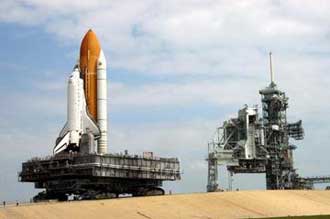 Image at Left: In June 2005, Discovery makes its way up the 5 percent grade to Launch Pad 39B aboard the crawler. Image credit: NASA