Grow Text SizeShrink Text Size
Bird Team Clears Path for Space Shuttles
Birds fly where they will and there's no way to predict when one or more might strike the space shuttle during launch or landing. To reduce the chances, Kennedy Space Center makes use of several bird-deterrent methods.

As a shuttle glides to a stop at Kennedy's Shuttle Landing Facility, or SLF, NASA's contrator team, EG&G feels a sense of accomplishment in creating the safest environment possible for its return. 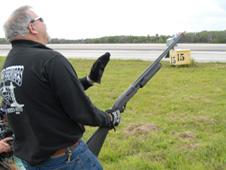 According to Ron Feile, EG&G air traffic controller, NASA's Space Shuttle Program mandates that NASA has a hazard management plan. The SLF plan includes the use of pyrotechnics, propane cannons and bird-watch activities.

About five hours before a shuttle's first landing opportunity, several EG&G workers are stationed at the SLF's Landing Aids Control Building, the control tower and at the runway overrun area monitoring bird activity.

Air traffic controller Vaden DeJarnette said that large flocks of birds can be detected on radar as they fly over or around the SLF.

"We mostly rely on communications from the bird-watcher and our own visual confirmation," DeJarnette said.

An astronaut flying in the Shuttle Training Aircraft over Kennedy communicates runway conditions, including weather, wind and bird concerns back to the shuttle crew.

Inside the control tower, EG&G air traffic controller Donny Linton monitors the runway for birds and keeps in touch with bird-watcher Bob Smith, who is stationed in a specially equipped truck on the ground. 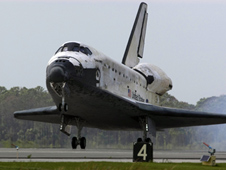 Smith fires shotguns and pistols loaded with blanks to scare large flocks of birds away from the runway. From time to time, he sounds a special siren from his truck or uses a remote control to set off cannons.

A series of 25 liquid propane cannons, placed in strategic locations along the east and west sides of the SLF runway, are controlled by air traffic controllers in the tower and remotely by bird-watchers in the field. These cannons, installed in September 2007, are fired randomly by zone, individually or all at once. Each rotates in a 360-degree pattern for the greatest effect.

Bird-watcher Kurt Asche said that Ospreys have tried to build nests in the landing facility's Mate-Demate Device and that it's a popular hangout for vultures.

"The bird threat can come from any direction, at any time, day or night," Asche said.

"There are times not to shoot at them. You don't want a flock of birds flying around as the shuttle is landing," Asche said.

Feile said the SLF team also monitors bird activity when crews are at the center for Shuttle Training Aircraft practice.

"It gets more interesting during the winter months with the addition of migratory birds from the north," Feile said. "It's just the nature of doing business on a wildlife refuge."